Glimpses of Singapore's Past by Ann Turnbull

My first visit to Singapore, in October 2013, was in response to a family emergency. We stayed in Chinatown, near the General Hospital. The streets there are lined with shophouses whose upper storeys overhang the shop fronts below, creating a covered walkway. These paths, known as the 'five-foot ways', provide much-needed shade and also shelter from the rain. 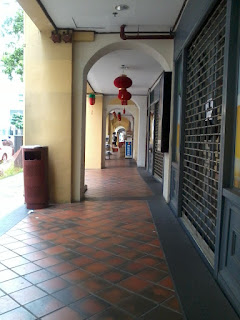 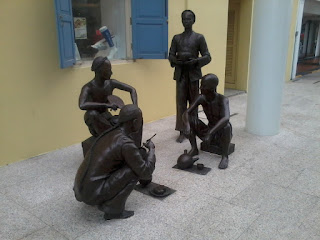 There were plenty of young people around, with children and babies - but I also noticed older people, and was struck by how many of them had bandy legs.

"It's rickets," I was told, "caused by lack of food in childhood. Singapore suffered terribly during the war."

Of course. These people were the children of the late 1930s. Much later, I found out more about World War II in Singapore.

In January 1942 Singapore - then a British colony - came under relentless air attack from Japan. Hundreds of people died, and huge areas of the city were reduced to rubble. By 15th February Singapore had fallen. The next day Japanese soldiers marched into the city. After the war, there was a feeling among people in Singapore that the British had deserted them - and in retrospect it does seem that, had the British mounted a counter-attack at the critical moment, they might have prevailed.

The Chinese community remembers the horror of the Sook Ching - the 'purge through cleansing' - a mass screening and purge of Chinese men aged between 18 and 50 who had supported the war effort in China. About 50,000 men were loaded into lorries, taken to Changi or Sentosa, and shot. There must have been huge numbers of fatherless families left behind. Food was scarce, and people trapped in the city struggled to find anything to eat or anywhere to shelter. It's no wonder that those who are left still carry the scars.

When the British returned in 1945, Singapore was in ruins and its people were struggling to survive. 'People's Restaurants' were set up to provide affordable food, and the city was slowly rebuilt. But the housing shortage persisted for many years.

We were told we should visit the Chinatown Heritage Centre in Pagoda Street - a small museum in a converted shophouse. On entering, we found ourselves in a reconstruction of a tailor's workshop. 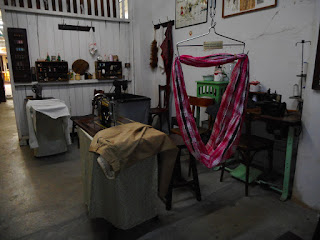 There were sewing machines, pattern books and order books on display. A baby's cradle swung from a hook in the ceiling. The tailor ran a successful business, but he and his family and apprentices lived very frugally in the rented premises and worked from around 8am till 9pm.

Upstairs, on the first floor, we were astonished - shocked - to see that all the space except a narrow access corridor had been divided up into cubicles measuring 8' x 8'. These spaces were rented out by the landlord as living accommodation. At night even the corridor was let to labourers who had nowhere else to sleep. There was a single kitchen and toilet shared by more than forty people. 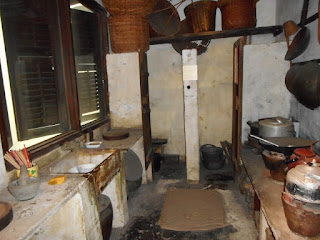 Unlike the kitchen (which must have been impossible to keep clean) the cubicles were made as homely and neat as the inhabitants could manage. Their few personal possessions, photographs and good luck charms were given space; their bowls and spoons and baskets were kept clean; there were children's toys, and a few items of clothing on hooks.

The first cubicle - almost filled by a workbench that doubled as a bed - was home to a carpenter and his pregnant wife; in the next were a hawker, her husband and their children; then four Samsui women (these were female construction workers); a clog-maker and his family; a factory worker with six children. There was even a physician and his family; he ran his practice from here, attending mainly to the very poor whom he could not bring himself to charge.

It was while looking at these people's homes that I noticed, among the pictures pinned to the walls, some images that I recognised: British women with perms and frilly aprons and dazzling smiles - 1950s women. These were the advertisements I remembered from my own childhood. It was only then that I realised how recent all this was.

Chinese immigrants had been coming to Singapore in search of a better life for a hundred years or more. They were known as the 'Sinkeh' - 'newcomers' - and were often drawn by stories of rags to riches. 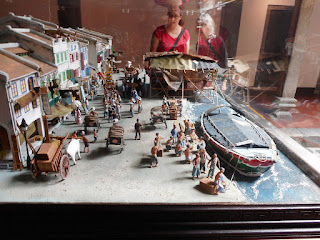 Most of them were ripped off by existing residents within days of their arrival and left penniless. One man, quoted in the background history display at the museum, said that when he saw coolies, pitch-black with coal dust, at work on the quay, he knew he had come to a hard place. Unless a man had a trade he would become an indentured labourer. 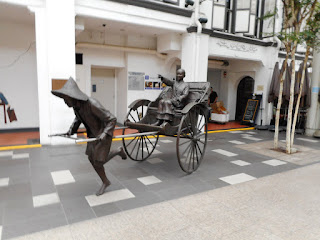 Singapore became a republic in 1965. Although Malay is the national language, in practice everyone speaks English because that is the language of business. Most of the inhabitants are Chinese, and Hokkien Chinese is also widely spoken. The Peranakan community are the descendants of Chinese traders, held up in the Malacca Straits by the trade winds for months at a time, who married local women. Indians have also lived in Singapore since the 19th century, and Little India is a thriving area. The city is full of temples, mosques and churches, reflecting the various communities. 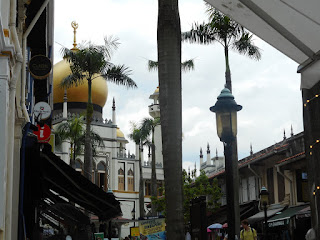 On a second visit as tourists in 2018 we saw and enjoyed all the beautiful gardens, indoor shopping malls, museums and galleries. Having found out about the people's struggle to rebuild and recover since the 1960s, I was more than ever impressed and astonished by Singapore's success. 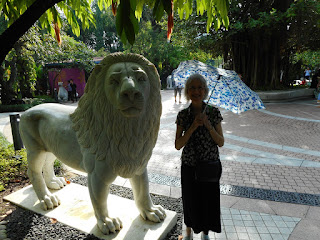 Contrary to what is implied by the name Singapore (which means Lion City), there have never been any lions in Singapore!

What an interesting post and place, Ann, and how hard to have a private, peaceful life in those tiny rented spaces. Still a concern for many but that doesn't make it better.

Ths made me think how easily personal narratives pass over what happened to those - the workers, the servants, the clerks and so on - left behind when one authority loses its power. I'm commenting on this, having just watched Mark Rylance's (tv) story of his grandfather, a Singapore banker who spent timbecame a japanese prisoner of war.

I am hoping to visit Singapore soon. Delighted to learn there is so much history still visible!