The Defynnog Yew, a remarkable tree! by Katherine Langrish 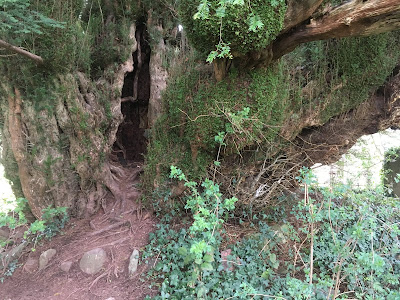 One day in March this year,on a weekend in the Brecon Beacons, we stopped at the little church of St Cynog in the village of Defynnog to visit what some people claim may be the oldest yew tree in Europe - around 5000 years old! Whether this date is accurate is disputed - but experts agree it's very old indeed, at least 2000 to 3000 years. 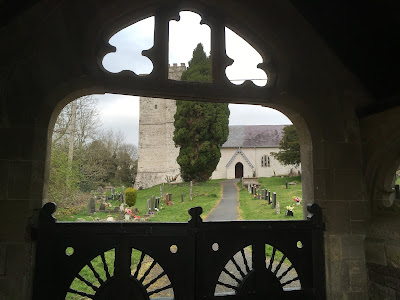 We pushed through the lych gate and went up the path through the graveyard. There were venerable yews a-plenty - you can see one in the photo below -  but the one we were after is on the far side of the church - a church it of course predates by centuries, if not millennia. 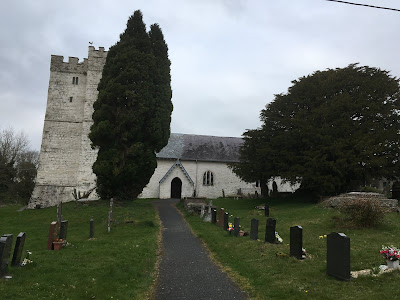 St Cynog's has been here since the 11th century and may be older, though most of the structure is now 15th century. (The story of Cynog can be found at this link.) In the porch is a 5th century pillar stone carved with Latin and Ogham inscriptions commemorating 'Rugniatis son of Vendonius'. The yew was there before him, too. 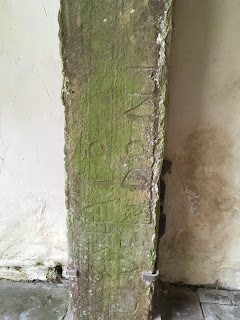 And here it is. When you get near you can see it has two trunks and so looks like two trees, but DNA testing (I never knew you could DNA test trees) by Roslin Forestry research confirmed the two trunks are identical. Two trunks, a single tree. Moreover they found that the tree is 'monoecious', both male and female. 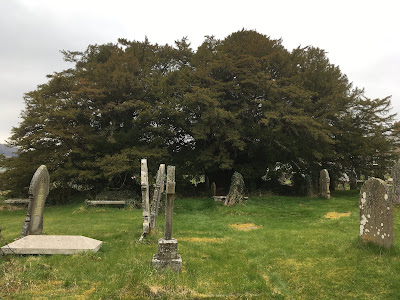 I bought a pamphlet in the church which put forward a number of theories about the yew (some mutually exclusive): that it was planted long ago to honour a tribal chief; that it could have been an accidental or natural germination; that it was been grown from a cutting taken from another sacred tree far away or even abroad; that it was a sacred tree which symbolised the axis mundi... clearly, nobody really knows. In the Middle Ages apparently it may have been a special meeting place, and the centre of Cantref Mawr, the Hundred of Defynnog. The best guess is that the church was built here because of the tree; the tree itself was sacred. And now it shelters the Christian graveyard. 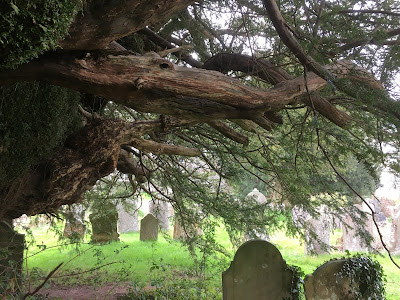 The tree is so huge I couldn't get a close-up of more than parts of it. Here's me, glancing down at our dog Polly who was taking a great interest in the clefts and hollows of the two vast trunks... 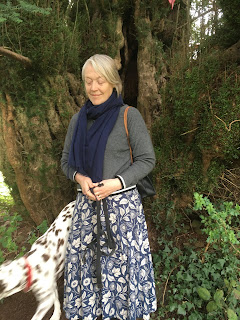 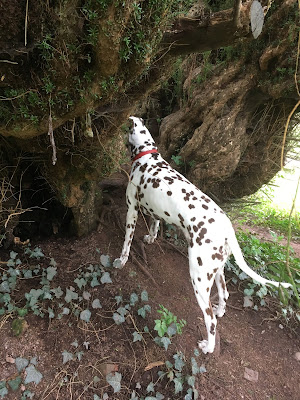 One rare and interesting characteristic of the Defynnog Yew is that it produces 'golden boughs' - sprays of leaves with a blanched, yellow colour, very striking against the usual dark foliage. Was this so from the beginning, and is it what made the tree so very special? 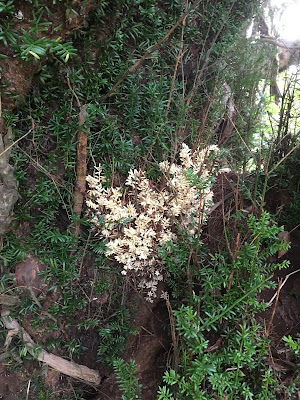 I was also interested by the green fur of yew leaves covering parts of the trunk like a cloak. 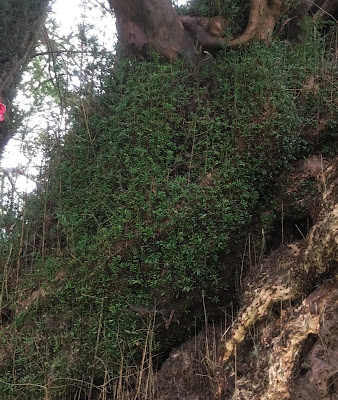 The church pamphlet goes on to claim that Wales has the largest collection of ancient Yews on earth and that many were 'brought here as cuttings, branches or staffs from the Holy Land or Egypt, which were then planted in remote places so that their survival would be ensured, well into the future.' If so (no evidence is given in support for this practice and I have to say I'm a bit dubious - why in remote places? why not in established church yards? would a staff really root?) such cuttings would also post-date this particular yew. The church guide also makes the claim that the modern graveyard was once a neolithic burial site, which I would be happy to believe if - again - any evidence or reference were provided. It may be so...

In his book 'Superstitions of the British Isles'  Steve Roud says no one really knows why yew trees are so often grown in graveyards. "Accident can be ruled out, and a deliberate policy presumed, and there are numerous stories which are told to explain this." He investigates some - that yew wood was used for making bows, so it was ordered that yew trees should be planted in every churchyard - that because yews are poisonous, they were planted in churchyards where cattle could not reach them - and concludes there is no real evidence for any of them and though there was clearly "a traditional connection between yews and death or mourning in medieval times in Britain, its exact nature has yet to be discovered."

Robert Graves, in 'The White Goddess' has (characteristically) a lot more to say about the yew - that it's one of the Five Magical Trees of Ireland and the fifth letter (I fo Idho) in the Tree Alphabet, that it's "the death-tree in all European countries, sacred to Hecate in Greece and Rome", that in Ireland wine barrels were made of yew-wood so it was known as "the coffin of the vine", that yew stakes were driven through the corpses of the fated Irish lovers Naoise and Deirdre to keep them apart but that "the stakes sprouted and became trees whose tops eventually embraced over Armagh Cathedral," that "In Brittany it is said that churchyard yews will spread a root to the mouth of each corpse..."

Axis mundi, tree of death, tree of eternity, all of those things? Well... Yews are evergreen and sombre, lit with the little red berries of which the flesh is tasteless and the seed is poisonous, and they live practically for ever...

Maybe that's how it all began.

Katherine left us a few precious posts before she stopped being a History Girl. We are very happy to use one today as it was Gillian Polack's turn and she has had to leave her home in Australia and relocate because of the air quality from the bushfires, Gillian will be back later this year but thanks, Katherine!


Posted by Katherine Langrish at 00:01

Meetings with remarkable trees! I went straight to Google maps to find out where the village is -- and the tree is marked on Google.

The double trunk reminds me of the Fortingall yew in Scotland. It looks like a circle or grove of trees. The original, massive trunk hollowed out and separated and each separate piece looks like a different tree. Estimates on its age go up as high as 9000 years -- and as low as 1,500. Like the St Cynog tree, it's near a few ancient sacred sites and has been christianised with a church.

What a splendid tree! Thank you for introducing it to us!
We have an ancient yew in a churchyard near here, in Corhampton (Hampshire). It is also thought to predate the church, which is Saxon, built in the early 11th century. So it’s a mere sapling compared to your Welsh tree! However, I wrote about Corhampton church, and its yew, in a History Girls post some time ago (http://the-history-girls.blogspot.com/2017/10/corhampton-church-saxon-gem-in.html). On the subject of why yews are so commonly found in churchyards, I wrote this: “Apparently, the Druids regarded the yew as sacred and planted them close to their temples. Early Christians often built their churches on those ancient consecrated sites, so the association of yew trees and churchyards may simply have been thus perpetuated. On the other hand, some think that yews were planted in churchyards to ward off evil spirits, or because they grew so well with their roots feeding on the corpses that there was a plentiful supply of the wood for making good bows!” More reasons to add to the list of possibilities!