A very long way from Rome - by Ruth Downie

If there’s a museum around, I’m usually to be found in the Roman section. But Roman sections are hard to come by in Hong Kong, where a recent visit forced me out of the comfort zone to discover the treasures beyond. Here are a few favourites. 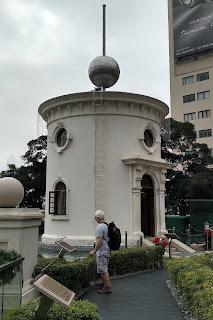 If you know what a Time Ball does and why (and they’ve been around since 1829) then skip the next section. If you share my former bafflement, read on.

There’s a clue in the location: the Time Ball Tower is set on a hilltop that would have been visible to most of the ships in the busy Hong Kong Harbour below. And that’s the point. In order to navigate longitude, a ship’s captain needed to know exactly what the time was, and until the mid 18th century, timepieces were notoriously unreliable at sea. If you haven’t read “Longitude”, Dava Sobel’s account of how the inventor John Harrison solved that particular problem, then I thoroughly recommend it. But even Harrison’s marvellous marine chronometer would only work if it was set to the right time in the first place.

For many years ships visiting Hong Kong would set the time by the sound of a noon-day cannon. Well, maybe not by the sound. Because as anyone who’s watched distant fireworks will know, sound doesn’t travel as fast as light. The noise of the cannon could take up to three vital seconds to reach the far ends of the harbour, so what the sailors actually did was watch for the puff of smoke. A more accurate signal, but worryingly ethereal. 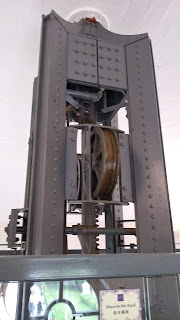 It was a British naval officer who invented the visual clue of the time-ball: a huge metal ball to be hoisted up a pole and then dropped at a precise time for all to see. Hong Kong adopted the idea in 1884 and the ball fell daily at 1.00 pm sharp, as determined by the nearby observatory.


Thus it was with great anticipation that Husband and I rushed over to the refurbished tower at 12.55pm, only to wait… and wait… and wait, until our mobile phones told us the moment had long passed. What we didn’t register until later was the day. The original time ball did not fall on Sundays or public holidays, and this was a Sunday. Time and tide might wait for no man, but the sychronising of timepieces evidently does. 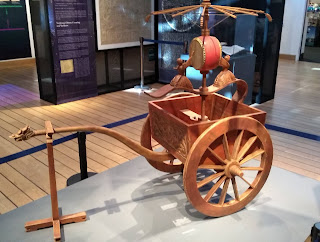 Hong Kong Maritime Museum is always a treat, and they currently have an exhibition on map-making. Fundamental to making a decent map is being able to measure distances. While the Romans seem to have had some sort of wheeled vehicle with cogs that dropped pebbles through holes, the Chinese approach was far more stylish.

Here’s a replica of a machine in use during the Han dynasty (206BC-220AD). After a set distance the little men on top bang their drum. Much more fun than pebbles in a box, no?

These are from the Hong Kong Museum of History and were in use in Neolithic times. Such a clever and simple idea. Maybe I haven’t been paying attention, but I’ve never seen anything like them before. 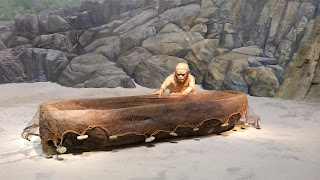 The story of these grim but highly practical objects is told in the Hong Kong Museum of Medical Sciences. 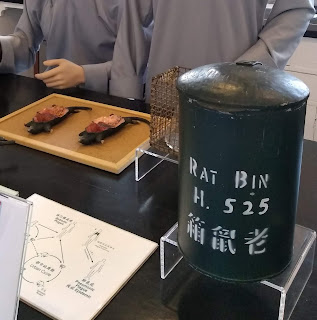 In 1894 Hong Kong was ravaged by plague. In the fight against the spread of disease, numbered bins were placed on lampposts all over the city for the collection of dead rats in disinfecting carbolic acid. Bins were emptied twice a day and each creature was marked with the number of the bin it had come from before being inspected. Any signs of plague infection in the rats gave the authorities a head start in surveying the local area for human cases.

(Incidentally, the bacterium responsible for plague was first discovered in Hong Kong during this outbreak. It’s named Yersina Pestis after one of its identifiers - Alexandre Yersin.)

On a more cheerful note: some major cultural fusion in nearby Macau. 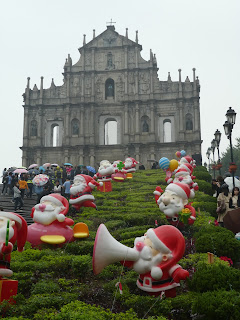 In the background: the stunning façade of St Paul’s. It’s all that remains of a church and college built in the 17th century by exiled Japanese Christians and Chinese craftsmen in a Portuguese-controlled territory under the direction of an Italian Jesuit. In the foreground: heralding a very twenty-first century Christmas.


And finally - there wasn’t a total absence of Romans. 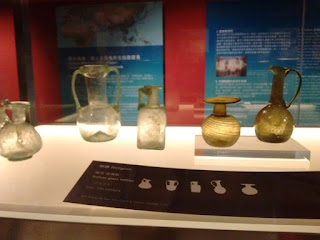 These familiar-looking glass vessels (now in the Maritime Museum) arrived sometime between the second and ninth century, presumably via a trade route. And to demonstrate that the travel wasn’t all one way, recent work on Roman-era cemeteries in London and Somerset suggests that some of the occupants had origins in East Asia.

I wonder what their favourite British finds would have been?