There will be very little by way of illustration in this post. I am unsure of what's in copyright and what's not, so unless I'm quite certain of  not contravening any laws, I'm going to leave this piece with no pictures of the very thing I'm writing about: The Rajah Quilt.  Below is a photograph of the cover of a  book I have, published by National Gallery of Australia and given to me by Carolyn Ferguson, of whom more later.... 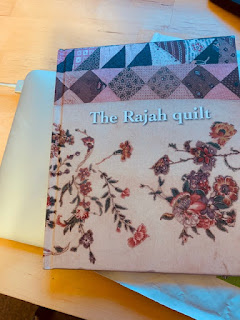 In 2009, I visited an exhibition called QUILTS at the V&A in London. Among the many astonishing and beautiful pieces of patchwork, there was one that particularly caught my attention. This was a coverlet made by some of the transported female convicts on the ship Rajah, which set off from London in April, 1841 bound for van Diemen's Land (modern Tasmania).  I stood in front of it for a long time, amazed at its beauty and struck by its interesting  history.

On this voyage, the convicts were accompanied by Kezia Hayter, a young woman of 23, who was a relative of George Hayter, one of Queen Victoria's court painters. She had been helping the Ladies of the Prison Committee to make life for women prisoners in London's gaols more bearable and she was appointed as a Matron to accompany the women on the Rajah and help them acquire  needleworking skills which would come in  useful in their new lives on the other side of the world.

I realised, as soon as I left the V&A, that one day I would write about this story: the voyage and the making of the patchwork.

More than a decade later, in early 2021, a novel by me, called DANGEROUS WOMEN, will be published simultaneously by Michael Joseph in UK and Berkley in the USA. It will, however, not appear under my name but under my pseudonym: Hope Adams.

I have three reasons for adopting a pseudonym for this book. The first is: it's not the sort of book I have ever written before (a historical novel for adults, inspired by a real event) Secondly, Hope Adams is the name I used to submit the book to publishers. I didn't want anyone who read it at that stage to be influenced one way or another by knowing about my other books.  And thirdly, it feels right to have a new name for what has been a kind of reinvention of the sort of book I write. I chose Hope because I was living in hope all the time I was writing the book over the last few years, and Adams because it's at the beginning of the alphabet and because, unlike Geras, you don't  have to tell people how to pronounce it. The pseudonym is not a secret. I've already done events under that name, and I will be putting up tweets from and about Hope Adams' progress and the publication of the novel on Twitter.

Between 2009 and 2017, I thought about the book and picked it up and put it down from time to time. In 2010 we moved from Manchester to Cambridge. I wrote two novels Cover Your Eyes and Love or Nearest Offer (pub Quercus pbk) which could be described as 'women's fiction.'
In 2018, I wrote the first 20,000 words or so of what became Conviction. I submitted it to an agent (Nelle Andrew) under my pseudonym and felt very lucky that she offered to represent me.

A lot of hard rewriting then followed and in early 2019, the novel was bought in a two- book deal. This is a link to the  piece about it in the Bookseller:

I was much relieved to see this appear, because almost from my first sight of the Rajah Quilt, I've been worried that someone might beat me to it, and write a novel about this historical event before my own book appeared.  My next novel, which I hope to be writing this year, is inspired by the  work of the  Scottish artist, Phoebe Anna Traquair.

I said I would mention Carolyn Ferguson again. When we moved to Cambridge, I met her again after not seeing her for several decades. We were at school together but had lost touch entirely. Then she emailed me and it was a happy coincidence that we'd both ended up in Cambridge. But even better....and ever so slightly spookier...Carolyn is not only a gifted quilter herself but also an expert on 19th century textiles who has written quite extensively about ... the Rajah Quilt. I felt as though I'd been gifted a cross between a wonderful resource and a special guiding light for the novel: someone who was as struck with Kezia Hayter's achievements as I was. I cannot overstate what a  great help to me she's been. If the book has any historical authenticity, it's thanks to Carolyn.

I've not said much about what happens in the story, apart from the one fact we know: that the patchwork coverlet was made. I've  is constructed a fictional narrative around what is known about this very well-documented voyage. I hope that readers will enjoy the book and give Hope Adams  a welcome when she appears in the shops next year.

Wonderful, Adele! Can't wait to read it. Such a wonderful story. Quilts tell us so much about the women who made them and their lives and they express so much about women's art and skill - still do!

Really looking forward to this, Adele, This book sounds as though it sprang from the best of inspirations!

How exciting! I'm so looking forward to reading this, Adele.

Good luck with the book, Adele - can't wait to read it!