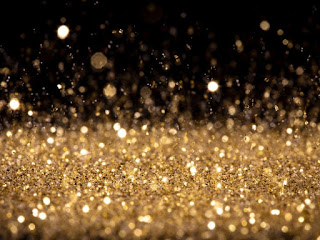 Those of us who have been watching “The Luminaries” know exactly where gold comes from. It’s found by a ragged creature in a broad-brimmed hat who spends hours squatting by a stream, shaking a large flat dish and staring into it.

Perhaps that’s how the earliest miners worked at Dolaucothi in South Wales, but who they were, what they did or when they did it remains a mystery. Unfortunately for archaeologists, later miners and quarrymen tend to hack away the work of earlier ones, and a Roman mine manager with professional engineers, plenty of labour and official backing tended to hack away more than most.

When the legions turned up in the first century AD and declared South Wales to be Under New Management (a statement greeted with less than universal joy, and followed by much bloodshed) it was inevitable that they would commandeer the local resources for their own benefit. What could be more glamorous to commandeer than gold?

The reality was less glamorous than the end product. Especially for the poor souls who were condemned to tramp up the never-ending steps of a waterwheel in the dripping dark in order to keep the workings below from flooding. We know about them because some 1800 years later, modern miners found part of the wooden wheel in a Roman underground chamber. Here’s a scale model: 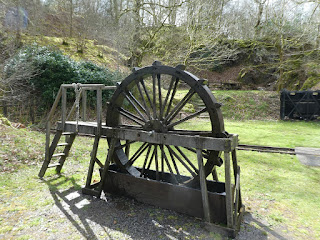 The hollow rim of the wheel is divided into compartments which fill with water when they’re at the bottom. As the wheel turns over at the top, the water spills out and away down another channel. To add to the woes of the operator, it’s not even very efficient. Now imagine doing it underground with no electric light: 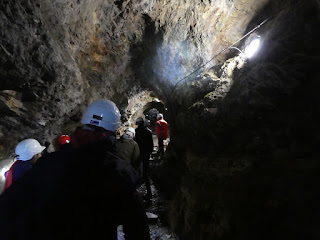 The fragment of wheel is one of the few finds that is incontrovertibly Roman because the wood has been dated. Much of the rest of the evidence at Dolaucothi is delightfully enigmatic. My husband and I were were very glad of the guide on our trip, because while we would have enjoyed a bracing country walk, we would have strolled past most of the sights with no idea of what we were looking at.

Here, for instance, is a shot of the peaceful valley where the National Trust has repurposed twentieth-century mine buildings to welcome visitors. 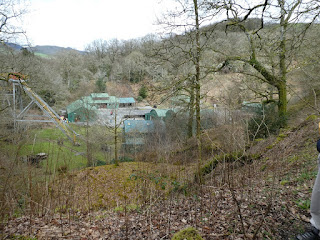 Except… that is not a valley. That is a massive opencast mine, and the valley floor (once used as a caravan site) is flat because it’s made up of backfill.

The tunnels below and around it are the work not only of Romans but of Victorians, Edwardians and miners of the 1930’s. (The Trust also offers a splendid Victorian mine tour.) What united them all is the search for this: 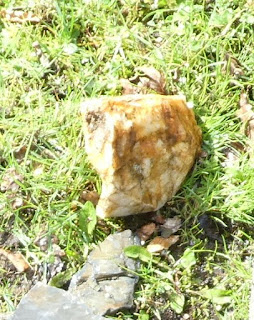 Clearly in need of some further refinement. Below is the amount of rock needed to yield enough gold for a ring. 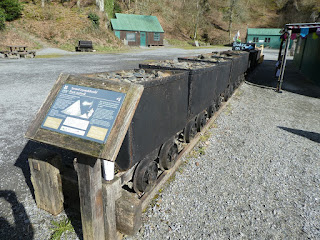 Yes, all those truckloads to make one ring. No wonder Gollum thought it was precious.

It’s sometimes said that the ancient world barely bothered with mechanization because slaves (of whom more in a moment) could be forced to do all the heavy work, but that’s not necessarily true. Consider the stone below, which is within sneezing distance of the mine. 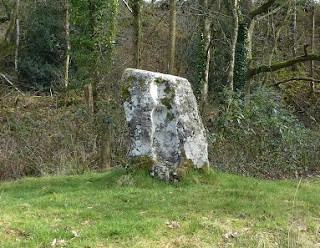 It may be the pillow of five Celtic saints who fell asleep in the mine after taking refuge from a thunderstorm. Despite the removal of their pillow, complete with the indentations of their heads, the saints are sleeping still, awaiting the return of King Arthur.  (Or the arrival of a pious Bishop. Sources differ.) This is why it’s called the Pumsaint (Five Saints) Stone.

On the other hand, it could be the anvil from a Roman water-powered stamping mill, built to crush the stone ready for processing.

To justify using a machine like that, rather than a gang of workers wielding lump hammers, they must have been digging out a LOT of rock. Here’s where some of it came from: 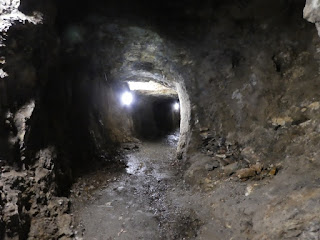 Even a duffer like myself can see it’s a tunnel, but why it’s that unusual shape and size and runs more or less straight through the hill and out the other side is anybody’s guess. An overengineered drain? A short cut to carry ore through the hill instead of over it? An exceptionally neat access to a seam of gold-bearing quartz? Theories abound.

We might sit and ponder them beside this tranquil pool... 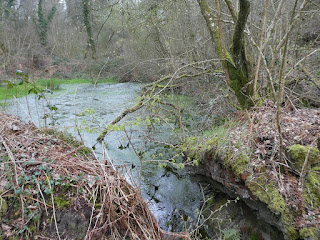 …which is part of the massive and sophisticated system of water engineering that once surrounded the site, extending for miles out into the hills beyond. Water power, stored and then suddenly released, would have been used for earthmoving on a spectacular scale. Apparently there’s still gold in the pond, but there are also so many noxious chemicals that removing it safely would cost more than it’s worth. 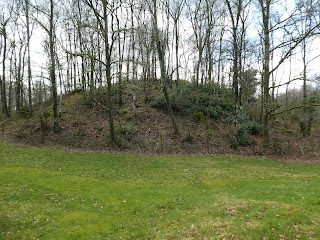 …until archaeological digging proved it to be a very neat Roman spoil heap. I like to think it would have pleased whoever organized the very square tunnel.

Which brings me to the question of who did all this work. The fort just up the road tells us that Rome was in charge, but were the miners themselves locals or incomers, contracted or conscripted? They may have been condemned criminals, branded in the middle of the forehead, fitted with heavy chains, and sentenced to a grim servitude from which few were expected to return.

I’d like to think that somewhere nearby, a cemetery with some answers awaits excavation.

In the meantime, here’s something we can all identify with certainty - the site of the local Roman fort. Also, by a happy coincidence, the pub. 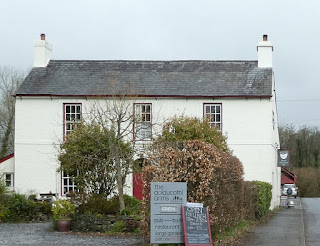 The Dolaucothi Arms is owned by the National Trust and was Countryfile’s Country Pub of the Year in 2019. It’s the perfect place to end a day scrambling around the hills in search of long-dead gold-diggers.

To find out more, visit https://www.nationaltrust.org.uk/dolaucothi-gold-mines

Ruth Downie writes a series of crime novels set mostly in Roman Britain and featuring Roman medic Ruso and his British partner Tilla. When she is not writing her happiest moments are spent wielding an archaeological trowel. www.ruthdownie.com

Wonderful - what an intriguing place. Love your description of the Roman invasion of Britain as 'Under New Management'!

I enjoyed looking at your website, too (we share a love of Roman Britain). Just off to order your Medicus books!

Glad you enjoyed it, Caroline! Hoping we'll all be able to get out and explore Roman Britain again before long.
Ruth

This is quite an advert, Ruth! I've enjoyed the Medicus books too. In fact, it's probably time I ordered another one!

Don't hold back, Sue! Seriously, thanks for the kind words - I'm glad you enjoyed the post. We had a great time at Dolaucothi and I hope they'll be open to visitors again soon.