Why the eighteenth century? By Gillian Polack

When I went to put it into fiction, some years ago, I wondered why I did this. Why, when I was a specialist in an entirely different period, did I keep returning to the eighteenth century? I had to write a novel to find that out. The novel was just released https://www.smashwords.com/books/view/1012689 (not a full release yet, COVID-19 has the strangest side effects) and so I find myself in the eighteenth century again, wondering what I learned about it from writing that novel.

It helped that the cover artist (Lewis Morley) is a friend and that he asked me questions about my novel when he designed the miniature street scene. I keep telling myself that this street lives in the Blue Mountains now, and that it perfectly summarises what I learned and why I had to write a novel to learn why I keep returning to the eighteenth century. Let me explain the image – that’s the simplest way of talking this through.

It’s not that what I do and did is complicated, it’s because I love what Lewis did with my world. 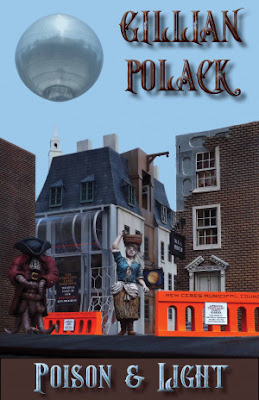 First things first: the story is fiction but I used a lot of primary sources and historical studies to write it and I used some of the primary sources in the novel itself.

This is why I keep returning there. I want to see what I remember as having enjoyed, sure, but I also want to add what I just discovered when I read a political harangue from the period. I want to use it to change my remembered eighteenth century and make it more like what I think the real one might have been like. I want to watch my eighteenth century grow and I want to look at its relationship with historical sources and with the work of archaeologists and… it’s an ongoing intellectual inquiry that fills a profound emotional need.

One day, I’ll discover why the eighteenth century is one of five places I visit to feed this emotional need. Right now, I’m enjoying the voyage. I’m enjoying it so very much that I created a future world far away from here, where the whole population is involved in a reinvention and re-creation of the eighteenth century. If I can do it, so can they.