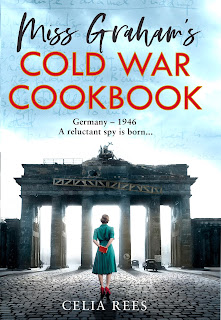 It was a very long time coming but it is here at last! Yesterday was publication day! I must confess to thinking that the day would never come. The book was in my mind when I joined the History Girls in June 2011.  I had always written Children's and Young Adult fiction but I knew that this book would be an adult novel. This would be a departure for me and and a challenge and I welcomed the chance to join a group of fellow writers who wrote historical fiction for all ages, including adults. I could not have asked for a more supportive group. Over the years, I've always been able to rely on a sympathetic ear through the book's vicissitudes and I have to thank History Girls, past and present, for their help, encouragement, and their generosity in reading and commenting on the finished book.
I could have stopped writing at any point, not even started, turned back to YA, the writing world I know, but the idea wouldn't leave me alone. Neither could I change it, introduce some young characters, turn it in to a YA title. I knew it had to be an adult book. It had been brewing away in my mind for years.
It began with the chance find of an old cookery book among my mother's effects. 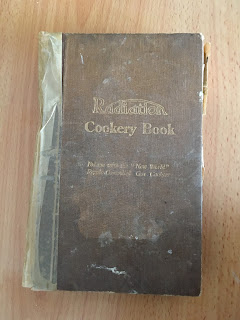 The book was a mystery in itself. I'd never seen it before. When, I opened it, I found clippings and cuttings from newspapers and magazines, some dating back to the war, and handwritten recipes - I recognised my mother's, my aunt's and what I took to be my grandmother's writing. As far as I knew, these were the only written connection between these three women. I had found no letters. I put the book aside. I knew there was something I wanted to write about there but I had no idea what it might be. 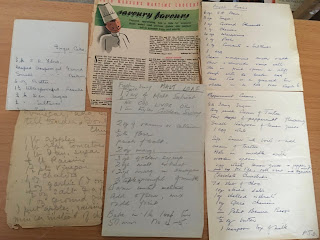 Years later, I was with my daughter in the Espionage Gallery of the Imperial War Museum. I read on a wall panel that after the war, the British Zone in Northern Germany had been a hotbed of spying. One of us said, 'Perhaps Aunty Nancy was a spy!'. We both laughed. My Headmistress maiden Aunt a spy? How ridiculous was that? But then again, it was perfectly possible...
She'd been in Germany directly after the war, working as an Education Officer for the Control Commission, the civilian branch of the occupying forces,  tasked with bringing some kind of order to the post war chaos. She'd been stationed in Lübeck, practically on the border with the Russian Zone. She had spent the war at home, teaching in Coventry and looking after my grandmother. Then, as soon as the war was over and much to the consternation of the family, she'd upped sticks and gone to Germany. She didn't come back until the mid 1950s. I remembered her coming back bringing presents for everyone, Benson & Hedges cigarettes for my mother, a carved bear for my brother and a stuffed monkey for me. I remembered other things about her. She'd led a bit of a hidden life. She was a fluent German speaker and had had a relationship with a German boy before the war. She'd also spent a lot of time 'jaunting about Europe' according to my mother, accompanying her her cousin who was rumoured to have been involved in something 'hush hush' during the war.
I had been her executor, one of the reasons I knew there had been no letters. I'd kept some things that related to her time in Germany. She had sent photographs of ruined cities and sunken ships in bombed harbours; a shocking addition to the family album. I found more in a German chocolate box. 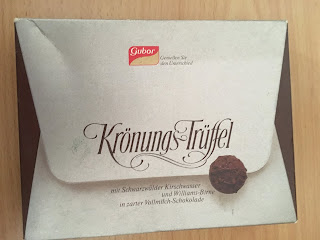 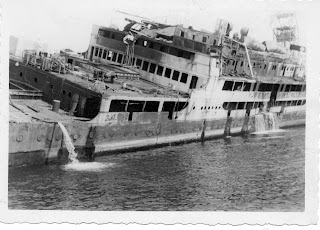 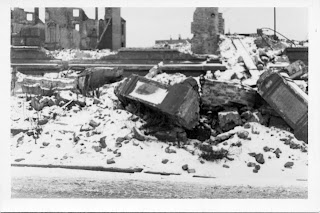 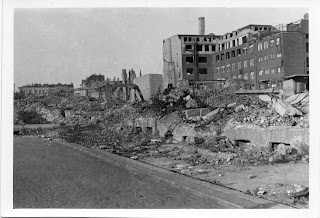 I'd also kept her passports, so I knew when she had entered and left Germany. 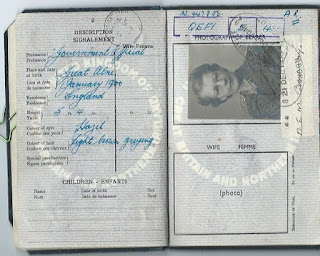 Among the photographs were holiday snaps of Bavarian villages, ox carts, two women walking along a street festooned with swastikas and a photograph of a young man in a cricket sweater. Could that be her friend Karl? 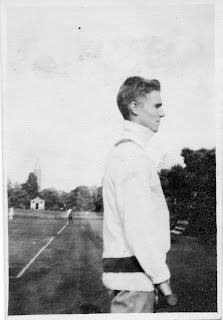 I knew enough about life to create the skeleton of a story. If she had been a spy, then who would she have been working for and why? What would she be finding out? If she was going to be sending messages via recipes, to whom would she be sending? I needed to know more about post war Germany and what was going on there. As for the coded messages and the recipes, it would make sense for the exchange to be between women.
The more I found out, the more possible it became. There were, indeed, women involved in post war work in Germany. Vera Atkins, ex SOE, working with War Crimes, trying to find her missing agents.
I already knew about the women who had worked for SOE during the war. I had read ex History Girl Clare Mulley's excellent biography of Krystyna Skarbek, aka Christine Granville, The Spy Who Loved. Suddenly a real plot was forming, new characters arriving and Miss Graham's Cold War Cookbook was born. 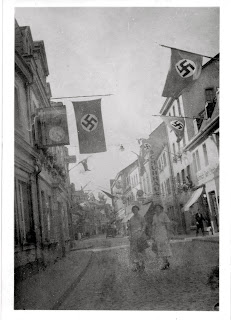 Congratulations on publication, Celia! What a wonderful story behind the story. I love the details of you finding the mysterious cookery book, the handwritten recipes and all the family connections.

My copy of 'Miss Graham's Cold War Cookbook' has just arrived hot off the press and I can't wait to start reading it!

Congratulations again and I wish you every success with your first adult novel. Here's to many more...

And a very fine book it is too! And it's thrilling to discover itsorigins in your own family.

Fascinating blog, Celia and sounds a fascinating book. I'm off to Amazon -