Surviving the Edinburgh Plague of 1645

by Deborah Swift
This is a wheel charm, in 16th Century Gaelic, to be used as a protection against death by poison and demons of the air, which were thought to spread the plague. (National Library of Scotland) 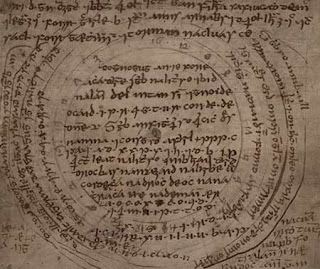 Many people have heard of The Great Plague of London, but fewer have heard of the Great Plague of Edinburgh in Scotland. The outbreak was earlier in Scotland and in 1645 proved to be the most devastating epidemic Scotland had ever seen. At that time Edinburgh was a much smaller city flanked by the Port of Leith, into which ships from all over Europe came and went, bringing their trade of furs and coal, of grain and cloth. You can view a fascinating site map of the city in 1647, and see how cramped it was, and make a guess as to why the disease spread so quickly, here on the National Library of Scotland.
Half the people dead
The outbreak was so severe that it is estimated that nearly half of the population died, while in the Port of Leith the percentage was even higher. Corpses were piled high in the streets and people infected with the disease were either forbidden to leave their homes,  or alternatively sent to rudimentary huts outside the city walls, where they had to stay for three weeks until they had a clean bill of health. Below you can see typical Edinburgh tenements of about 1635, where many people lived cramped together and the disease spread exponentially. 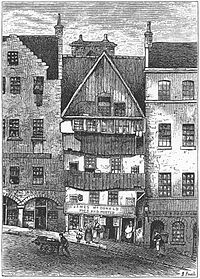 Lockdown 17th Century style
If you showed any symptoms you were immediately evacuated to the huts outside the town. The huts were rudimentary shelters located on the slopes of The Burgh Muir, which also housed a burial ground for those who didn't survive. The Burgh Muir is the historic term for an extensive area of scrubland lying to the south of Edinburgh. Volunteers called "Bailies" wearing grey tunics emblazoned with black St Andrew's crosses would take the ill out of the city by handcart or horse-drawn cart. On the way their clothes would be disinfected by "clengeris" - people who boiled the clothes in giant cauldrons to try to rid them of the '"pest" and theywould be issued with clean nightgowns until their clothes dried.
The huts were situated around the Chapel of St Roche, the patron saint of plague victims, presumably the idea that the intercession of the saint would help the afflicted. St Roche is a Catholic saint particularly associated with healing the sick and his church was built there so Catholics could confess and atone for their sins before they died.
I imagine that the dread of arriving at such a place, seeing your home was to be a hovel, with very little hope of escaping alive, must have been grim. Any Edinburgh person with plague symptoms was supposed to inform the Bailies within twelve hours. It must have been tempting not to do so, and to sit it out at home,  but if they failed to inform the Bailies, they could be branded, banished or even executed.
The Foul Hangman
Why would you want to be a Bailie and subject yourself to such a risk? Of course you kept people at arm's length with a long stick, with a white kerchief tied to the end of it, to signal people you were passing by, and you rang a warning bell. Corruption though was rife, and rich pickings could be had from homes that were ordered to be shut up or cleansed. Stealing infected goods on the Muir though, was punishable by death and a specific "foul" hangman was employed to deal with any offenders, who of course also included those who tried to escape or break curfew.
On record is the case of public outcry against those who risked others' lives. Marion Clerk from Edinburgh was drowned for visiting her sister when recovering from plague.
Herbal Medicine
Below - a tombstone embedded in the mausoleum of John Livingstone an  apothecary, paid for by his widow Elizabeth Rig. The headstone carries the date 1645. 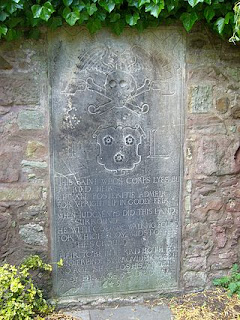 There were of course many plague doctors practising their profession, wearing the leather protective cloak and beak stuffed with herbs that are so familiar to us from other illustrations. Water germander was a popular herb known from ancient times and was widely prescribed, as was washing the affected parts with vinegar or wine.
I was interested in this history long before Covid 19 emerged and had written a story set in Edinburgh in 1645 for a short story collection. Then, I did not know how the time would mirror our own. I was interested in how the old religion (Catholicism) and the new Covenant in Scotland would hold up in the face of such a catastrophe. My story focusses on Irish immigrants to Scotland, of whom there were many, who came to Leith seeking work, only to find themselves in the middle of a deadly epidemic. 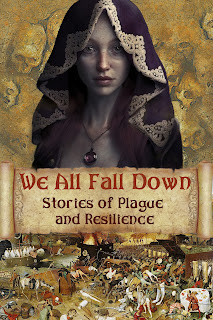 Fascinating, Deborah, particularly given current times. It's so sad reading about it but also so close to home. The wheel charm in 16th century Gaelic is intriguing and the illustration of the Edinburgh tenements is lovely.

Lots to think about - thank you for a great post.

Sobering to think how much worse that plague was than the present one.