Along the Silk Road to Bukhara - by Lesley Downer

The sands of Oxus, toilsome though they be,
Beneath my feet were soft as silk to me.
Glad at the friend's return, the Oxus deep
Up to our girths in laughing waves shall leap.
Long live Bukhara! Be thou of good cheer!
Joyous towards thee hasteth our Amir!
Rudaki (859-941)
translation by A. J. Arberry, 1958.
With the nights closing in and lockdown looming, I offer a trip on my magic carpet to anyone who yearns for escape to another time and another place. And who better to start our journey with than Bukhara’s great poet, Rudaki, who became the court poet and companion of the Samanid king and left a wonderful legacy of Persian verse?

For a couple of thousand years, until the middle of the 18th century, a network of Silk Roads linked Europe to China, crisscrossing Persia and Central Asia and the lands to the north of India. One of these highways led through the great city of Bukhara, the capital of the emirate of Bukhara of which Samarkand was a part. Bukhara had long been a centre of trade, culture, scholarship and religion. It was Central Asia’s holiest city, legendary for its wealth and beauty.
It was said that while elsewhere daylight shone down from the skies, it radiated up from Bokhara to illuminate the heavens.

Central Asia’s Holiest City
A thousand years ago, when Anglo-Saxon bards were telling the tale of Beowulf and a Japanese court lady was composing The Tale of Genji, Islam was enjoying its Golden Age. Bukhara, under the rule of the Samanid dynasty (819 to 999), was the intellectual centre of the Islamic world.

The Samanids were patrons of scholarship and scholars. Bukhara was home to many of the greatest figures of the age - the brilliant court poet Rudaki (859-941), famous as a musician, player of the chang (harp) and declaimer of verse; Firdausi (940-1020), also spelt Ferdowsi, author of Iran’s epic poem, the Shahnameh or Book of Kings; and Ibn Sina (981-1037), known in English as Avicenna, physician, astronomer, thinker and author of seminal medical tracts.

In the years that followed Bukhara’s fortunes rose and fell. In 1220 Genghis Khan besieged the city for 15 days. He conquered it but spared the populace. Then in 1260 Marco Polo’s father and uncle stayed three years and learnt Tartar (Mongol). Eventually they went to Cathay and met Kublai Khan.

In the nineteenth century Bukhara was still the holiest city in Muslim Central Asia. To Europeans it was a mysterious but alluring place surrounded by a natural barrier of mile upon mile of impassable desert. It was the Emir’s capital from where he ruled over a kingdom almost the size of the British Isles.

George IV was on the throne when the first British caravan arrived in Bukhara in February 1825. They had travelled from northern British India across the Khyber Pass to the Oxus and across desert lands which snow had turned into quagmire, only to discover to their chagrin that the Russians had got there before them. One of these Russians, the German-born Dr Eversmann, had infiltrated the capital in disguise and reported among much else that in this city ‘all the horrors and abominations of Sodom and Gomorrah’ were being practised. Besides his harem the Emir had the ‘services of forty or fifty degraded beings,’ he wrote. Things went on which ‘even in Constantinople’ were taboo.

Alexander Burnes - later famous as Bukhara Burnes - arrived on June 27 1832. He visited the Grand Vizier at the Ark, the Emir’s fortress palace. He described him as a wizened old man with small crafty eyes and a long grey beard. Burnes was a charmer and got on well with the vizier who saw him as an invaluable source of information about the outside world. Burnes saw the minaret from which criminals were hurled to their deaths and visited the square in front of the Ark where beheadings were conducted with a huge knife. He also went to the slave market where ‘these poor wretches are exposed for sale and occupy thirty or forty stalls where they are examined like cattle.’ When he left the vizier asked him to bring him back a good pair of English glasses if he ever returned. Burnes’ three volume Travels into Bokhara, published in 1834, introduced the romance, magic and mystery of Central Asia to the British reader.
Things did not always go well for the British in Bukhara.
A year after Queen Victoria came to the throne, on December 17th 1838, a daunty Englishman called Colonel Charles Stoddart rode through Bukhara’s great gates. He had been sent by the East India Company to try and forge an alliance with the Emir against the Russians, whom the British were convinced would storm across barren steppes, bandit-infested deserts and impassable mountain ranges down into British India and capture it if they weren’t held back.
Rather foolishly Stoddart arrived in full regimental uniform and didn’t even bother to get off his horse in the presence of the Emir, Nasrullah Khan, who had also heard rumours that he was a spy. He immediately had him arrested and thrown into a twenty foot deep pit known as the Black Hole, to which a rope was the only means of access and which he shared with three criminals and an assortment of vermin.
Three years passed. Then on November 10th 1841 Captain Arthur Conolly arrived to try and negotiate his release. He too ended up in the Black Hole. Finally the two were executed in the grand square in front of the Ark.

In 1868 Russian troops captured the kingdom of Bukhara. It remained under Russian, then Soviet rule until the break up of the Soviet Union and became part of Uzbekistan when the country was given its independence.

Beautiful Bukhara
Of all Uzbekistan’s Silk Road cities, Bukhara most retains the flavour of its past. The city is full of domes of pink brick, built in geometrical designs like M.C.Escher’s drawings. You can ramble the lanes and explore the bazaars, lined with stalls selling silks, fabrics, goods from all the neighbouring countries - Afghanistan, Kazakhstan - or heaped with spices, filling the air with the scent of cumin. At the centre of the city is the Kalyan Minaret which dates from 1127, so tall that when Genghis Khan put his head back to look at it, his helmet fell off and he decided to spare it.

You can gaze up in wonder at the Ark, a mammoth fortress whose formidable concave mud walls are impossible to climb. It broods over the city still, as it did in the days when Stoddart and Conolly met their end. You can even see a replica of the prison cell where they were incarcerated. The heart of the town is Lyabi Hauz pond, shaded by mulberry trees, where people sit all day drinking tea out of blue and white ceramic cups.

By pure chance we managed to arrive just as the city was celebrating the annual Silk and Spice Festival. People had come in from miles around, all dressed in their best. Musicians played lutes, fiddles, tambourines and drums, singers belted out folk songs, dancers undulated with intricate hand movements and a jester in a multi-coloured coat pranced about. The crowd raised their arms and danced too while an old man in a white turban leaned on a stick, observing.

The moon's the prince, Bukhara is the sky;
O Sky, the Moon shall light thee by and by!
Bukhara is the Mead, the Cypress he;
Receive at last, O Mead, thy Cypress tree!

From Bukhara the Silk Road traveller went on to Samarkand, which I’ll tell you about in my next post.

For the whole thrilling story of the opening of Central Asia, please read The Great Game by Peter Hopkirk - a wonderful book.

Lesley Downer is a lover of all things Asian and an inveterate traveller. She is the author of many books on Japan, including The Shogun’s Queen, an epic tale of love and death, out now in paperback. For more, much more, see https://www.lesleydowner.com/
The picture of Nasrullah Khan is courtesy of Wikimedia Commons. All other pictures are mine. 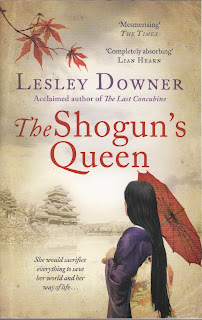