Communication was no easy matter during World War One. There’s an old joke about a message that originated as ‘Send reinforcements; we’re going to advance’ but which eventually arrived as ‘Send three and fourpence; we’re going to a dance!’ Although admittedly amusing, the joke has a dark side when one thinks of the consequences of inaccurate communication when applied to crucial military messages, and the difficulties of passing on messages verbally were by no means the only ones encountered.

Where military positions were established, messages could be sent to and from HQs telephonically once Signallers had laid down cables along trenches or buried them in the ground. This was dangerous work in itself and wires often needed repairing, leading to loss of life. However, when attacking, it was difficult to keep pace with an advancing force and impossible to connect sideways to other battalions moving forward in parallel. As a result, some ingenious communication methods were adopted. 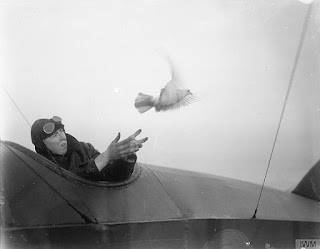 In addition to the use of rare and cumbersome radios and runners who may or may not survive a journey fraught with mines, artillery fire and snipers, vast numbers of pigeons were housed in mobile pigeon lofts so that they could be moved around the field of conflict. A smaller number could then be carried in a wicker basket on a man’s back to a position in the line and released to return ‘home’ with messages in tiny cylinders attached to the bird’s leg.
Pigeons have a ‘sixth’ sense – the ability to detect and navigate using the earth’s magnetic field. Although the mechanism for this homing sense was not understood during the Great War, in the 1980s researchers discovered tiny crystals of magnetite inside nerve endings in the upper part of the beaks of pigeons which detect the strength of the earth’s magnetic field. Others found that chemical reactions induced by light entering the bird’s right eye allow awareness of the direction of the magnetic field. These two together enable the bird to ‘see’ the magnetic field and find their way home. 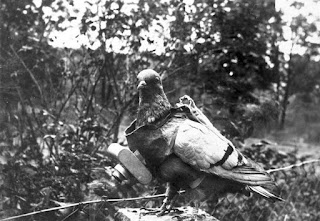 As well as taking messages from the trenches to the rear, pigeons were taken up in planes being used for reconnaissance to bear messages from aviators to HQ. Even more ingenious was the practice of fastening a small camera to the bird’s chest and releasing it at a pre-planned time. Aware of the route the bird would take to get home, the camera could be attached to a timer that operated the shutter, thereby collecting aerial images – literally a bird’s eye view!
Dogs were also used to carry messages or sometimes even to carry other messengers, as pigeon baskets could be strapped onto their backs.
Before basic radio transmitters, communication from a plane, to inform on the fall of enemy artillery for instance, was initially by dropping messages inside weighted streamers over the side. Kite balloons were also used for reconnaissance over enemy lines. Two observers went up in the wicker basket fixed beneath. One cable was used to tether the balloon to a lorry and the other to relay telephonic messages. The balloons made easy targets and, under fire, men ‘bailed out’ with parachutes.

Despite these resourceful methods, communication difficulties must have hamstrung officers making decisions on the ground. Once an attack had started there was no quick, reliable way to contact troops to redirect them or to call for reinforcements. There may be other reasons underpinning the epithet ‘Lions led by Donkeys’ but the lack of timely, dependable communication must have been a contributory factor in many decisions that turned out to be bad ones and resulted in an incalculable number of casualties.
Posted by J. Allnatt at 00:01