These are not the hands - Michelle Lovric 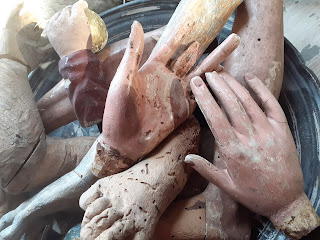 I’m making this short, as Covid-brain has inoculated me with attention deficit disorder, hop-skipping eyes and a dislike of detail. I don’t believe I am speaking just for myself when I say that I flinch away from length and complication the way we used to recoil from a mosquito when on holiday in the Mediterranean …

In 2020, my hands took a Great Leap Forward, not in a good way. They aged twenty years faster than the rest of my body. They don’t look like my hands any more.

Covid cleanliness is not next to pellicular loveliness. Add regular hand-washing to Corona-brain daydreaming, and I often find myself washing my hands for far too long. I can never remember when I last sanitized, so it’s always the right time to do it again. Result: mummification.

My messed-up hands had more use than normal during the lockdowns. They made many meals. They produced battalions of home-made cards collaged from antique ephemera and beads. They set up a guerrilla garden in my London street (only to have it stripped, night by night, by a thief); they spent quite a lot of time in the belly-puff of my fur-friend Caramella. They grew herbs and planted exotic tulip bulbs. They dispensed picnics on night-time boat trips in Venice.

But month by month, they looked more and more like leather carved out of a butcher’s apron. Caramella the cat, normally up for a belly rub at any time, began to cringe from my thorny touch.

I was reminded that I’d been here before.

In an anthology about quack medical cures for women, produced some 20 years ago, I’d included a section on the products sold to women eager to keep their hands supple, soft and elegant. Ironically, marketing for such potions was targeted at the gullible rich, and were likely to have been beyond the pockets of the women whose hands were regularly punished by washing and scrubbing.

As ever, with quack medicine, the charm for me lay in the language. Quacks were the poets of their day, tellers of adult fairytales of the perfectability of health and beauty.

Skin treatments for women have always been sold as more than simple creams or lotions: they are magical solutions to life’s problems, if the advertisers are to be believed. No metaphor was too extreme, no allusion too exotic, no caution too terrifying.

As Carl A. Naether observed his book Advertising to Women (1928): ‘I can think of no commodity field in which superlatives are used more excessively than in cosmetics.’

One must add these superlatives to the quack’s usual arsenal of terms that sound scientific, and may well be scientific in origin but have nothing to do with rejuvenating ageing skin – and also, perhaps more than in any other field, the quacks have always scoured the world for exotic ingredients, or at least the names of them, when it comes to beauty preparations. A skin tonic could hardly expected to be effective without containing some ‘May-dew sublimated’, or ‘Ready-drawn Spirit of Mint and Saffron’. Precious stones and flower essences were favourite stated ingredients, but often the contents were more prosaic, as was demonstrated in a series of books published in the early 20th century. 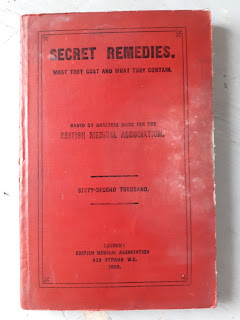 Secret Remedies analysed the contents of various well-known products. Part of the remit was to show how much very cheap ingredients were marked up by the manufactures (very much). Boric acid, maize starch, paraffin were popular ingredients but the most common one was … water. ‘Rino Curative Ointment’ was advertised as containing ‘napthalan, Peru balsam, chrysarobin’ but was found to consist of turpentine, oil of cade, boric acid and egg yolk.

Secret Remedies also pointed out that prices often started low, but those who wrote off for a simple cream would receive an answer that specified a complete treatment including a special soap, a medicine to be taken internally and a dusting powder. The treatment could not be expected to work unless all four products were used together, of course.

Preparations for women were often sold with a female name in the title, such as ‘Mrs Merroll’s Face Bleach and Skin Food’. Lady beauticians handbills survive from as early as the seventeenth century. Naturally, none but ‘Gentlewomen’ pursued this elegant trade. In London they were usually to be found in the upper-class parts of town, like Mayfair and Bond Street. Their handbills invariably boasted that they were patronised by ‘Persons of the Highest Quality’. Like the medical quacks, these ladies often claimed to have trained in France, Italy or Germany, and to be the possessors of certain secrets and special formulas, created by all kinds of scientific processes, ‘chymical’, ‘hermetical’, ‘chirurgical’ etc.

An advertisement for a miracle worker in London’s Bond Street is typical: ‘… this Lady preserves Youth and Beauty. She beautifies without any paint and increases the Radical Humour in some and restores it in others, corroborating the spirits, animals or vitals and the whole body…’

Restoration ladies had a horror of yellowing complexions, sometimes described as a ‘wainscot’ colour, and of red hair. Unmarried girls could easily look pasty – victims of the ‘green-sickness.’ Help was always at hand.

One of the most picturesque preparations to come out of the 17th century beauty industry was the so-called ‘Water of Talk and Pearl.’ Ground pearls were claimed to be the ingredients of many beautifying powders but ‘Talk’ (talc) was more likely to be the real basis for this kind of tonic, which, it was claimed, could turn an unfashionably brown complexion to clear, bright white.

Victorian advertising cast different kinds of veils, with pseudo-scientific terms appearing in the names and marketing, as in ‘Scurfgofus – ‘a scurf preparation’ and ‘Emollio Tablet’ for ‘softening and whitening’ the hands’.

‘Otto of Rose’ (‘cooling, healing, emollient’) was a popular scent for Victorian hand creams. There were also glycerine and benzoin preparations ‘unrivalled for softening, whitening and preserving the skin.
But these ingredients were too cheap and accessible on their own. An exotic name or ingredient was still required to ‘sex it up’. Hence, Snowfire Glycerine Jelly, Holloway’s Glyco-Vazin Cream for Eczema’, ‘The Egyptian Salve’ ‘Machin’s Infallible Pearl Ointment’, ‘Northern Foam’ whereas ‘Sootheen’ has a rather Irish flavour to it, ‘Saponaceous Cream of Almonds’. Number 1 Mannina Ointment claimed to cure not just skin lesions but cancer and tumours. ‘Zam-buk’, made of beeswax and oils of eucalyptus, camphor, red thyme and pine, first appeared in 1903 in Great Britain, Australia, New Zealand and Canada. The name is said to come from a ridge of mountains in South Africa. This product is still available to buy.

In my own research for something to cure my hands, I finally discovered a cheap, greasy, fragrant supermarket product that worked far better and smelled much nicer than so many creams on which the marketing dollar had been lavished. There was nothing tricksy about its packaging. There were no grand claims for the expense and exoticism of its ingredients, most of which I could have found on my own balcony or in my fridge.

My formerly mummified scrag-ends are now so soft that the cat once more consents to hold hands on the sofa while we watch her preferred bird documentaries. All good.

I hope you’ve found your equivalent, or even made it.
Michelle Lovric's website

Posted by michelle lovric at 00:01

I really enjoyed this post, Michelle. So glad to hear that Caramella is happy to have her belly rubs again!