Santa Claus is not just for Christmas - by Ruth Downie

The title of this post may seem oddly unseasonal, but in addition to his December activities, St Nicholas has a year-round commitment as a protector of sailors. In fact, according to https://www.stnicholascenter.org/who-is-st-nicholas/patron-saint/people# a vast range of people see him as their patron saint. Every time we stumble across one of them below, they’ll appear in bold. 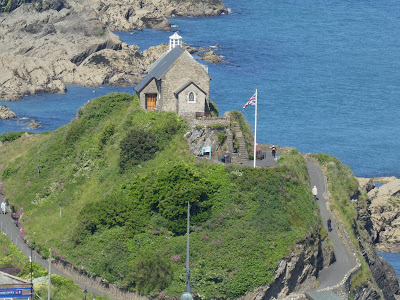 This is St Nicholas’s chapel, overlooking the harbour at Ilfracombe in North Devon. It’s also said to be the oldest working lighthouse in Britain: a claim that is hard to dispute because

A) nobody really knows when it was built (probably shortly after 1321, when Walter Stapelton, Bishop of Exeter, ordered the parish church of Ilfracombe to be enlarged) and,

B) nobody knows when it first became a lighthouse. We do know, though, that the light was shining by 1522, because the Bishop of Exeter ruled that the faithful could earn 40 days’ indulgence by contributing to the costs of its maintenance.

The first written evidence for the chapel dates from 1416, when Hugh Herle, Rector of Ilfracombe (and no doubt a preacher), was licensed to celebrate mass here, but the history of the harbour goes back much further - this photo is taken from between the ramparts of the prehistoric Hill Fort that watches over it. 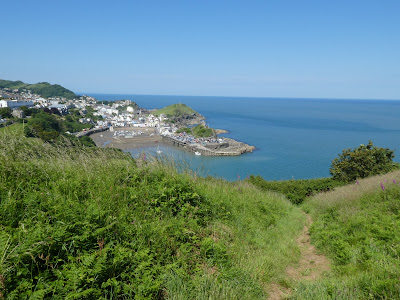 Having been welcomed to the harbour, St Nicholas soon had plenty of sailors to protect. In 1346 Ilfracombe was a big enough port to send 6 ships and 79 men to support Edward III’s siege of Calais. (Or possibly 8 ships and 62 men, depending upon your source.)

Anyway, as one historian observes,* since this came to light, “… there can have been no guide book that has omitted to boast of this proof of the town’s former maritime importance.” One or two guides also delight in pointing out that “Liverpool sent only one”.

Ships’ carpenters, dock workers, chandlers and probably brewers must have worked in sight of the chapel on Lantern Hill. There are also tales of captives and pirates, but perhaps the latter were falsely accused.

Henry VIII’s dissolution of the monasteries ended the chapel’s formal religious functions. It seems to have carried on as a lighthouse, but its other uses are unknown until the nineteenth century and the rise of Ilfracombe as a holiday destination.

At times, had St Nicholas visited his chapel, he could have seen paddle steamers moored six deep against the pier, bringing travellers from Bristol and South Wales. Amongst them we might fit in any number of the faithful, including

There were also choristers, although not everyone was impressed:

'On board our steamer “The Brighton,” to Tenby and back. – I think we must have the “Something-can minstrels” whose performance was so graphically described by Dickens in Pickwick as enlivening Mrs LEO HUNTER’S garden party, when “three of them grunted and the fourth howled”; only that, on this occasion, there were above eight or ten of these minstrel boys from Cardiff, who… sat in the centre of the upper deck, inflicting their delightful melodies on such of the passengers as were unable to get out of earshot.'

On a happier note, between 1866 and 1886 the local lifeboat rescued 45 shipwreck victims from the dangerous waters outside the harbour. 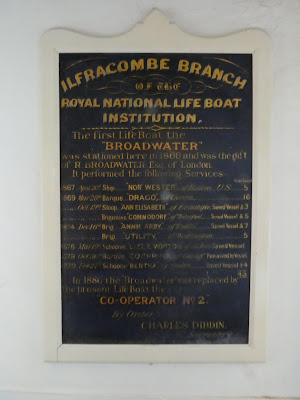 For many decades of Queen Victoria’s reign the chapel light was the responsibility of Mr John Davie, whose achievements as a lighthouse-keeper (whilst highly commended) are eclipsed in the modern mind by his achievements as a parent: he and his wife Elizabeth raised a family of thirteen children in a building which is, fundamentally, three rooms and a narrow staircase.

For much of Mr Davie’s tenure, part of the chapel was also used as a reading-room during the tourist season. It’s hard to imagine how this was achieved within the space available, and perhaps the family were not sorry when the advent of cheap newspapers put the reading room out of business. With the help of her daughters, Mrs Davie then used the space to set up a laundry - a hard enough way to earn a living at the best of times, and surely not helped by Lantern Hill’s apparent absence of a water supply.

John Davie died in 1870 and Elizabeth took over as lighthouse-keeper, but not for long.

The chapel’s original builders had heeded the biblical advice to build their house upon the rock (see the photos below) but they hadn’t reckoned on the capabilities of Victorian engineers. 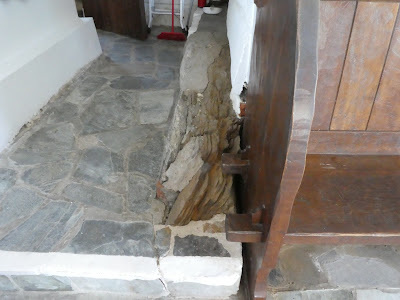 Ilfracombe was now attracting so many visitors that it was deemed necessary to extend the pier. This involved the rearranging of nature with the help of explosives. As a result, on the night of Sunday January 14th 1872, there was a large and presumably unexpected rock fall on the landward side of the hill. The chapel survived, but it was no longer habitable and the family moved out.

A petition was raised to save Lantern Hill, which was allegedly being demolished to provide infill material for the harbour works “and thus to save the pockets of the Contractor”.

By the time of the 1881 census, Mrs Davie was again working as a laundress. The chapel remained empty, although it must have made a good practice room for the Band of the Artillery Volunteers, since there were no neighbours to disturb.

Lantern Hill also saw occasional religious use - a photo from 1929 shows another group of choristers in white surplices gathered for “The Blessing of the Fishing Nets”. The fishermen's nets can be seen draped over the wall beside them.

By the end of the second world war the still-empty chapel was in a sorry state. Eventually in 1962 it was restored by the local Rotary club and the council, no doubt including citizens, merchants and Parish clerks.

In 1982 the first christening took place in the chapel since the days of Henry VIII. Appropriately, the infant was a descendant of the Davie family.

The light of the chapel still guides mariners to Ilfracombe harbour, although according to Visitmyharbour.com: 'The light on top of Lantern Hill is not at all obvious and “lantern” is probably still the best description!' Just as well, then, that St. Nicholas also looks out for navigators.

*Lois Lamplugh, “A History of Ilfracombe”

Ruth Downie is the author of the MEDICUS series of murder mysteries set mostly in Roman Britain, but just occasionally she likes to come up for air in later centuries.
www.ruthdownie.com 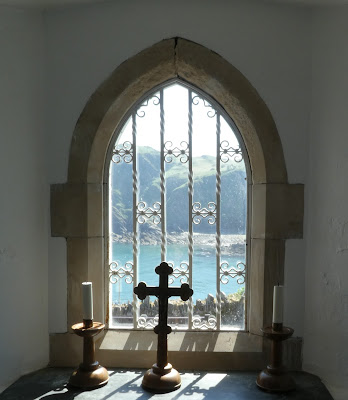 Very much enjoyed this.
Saint Nick is a patron of travellers too? I think I'd rather have my travels overlooked by Santa Claus than by that mythological, dog-headed giant, Saint Christopher.

What a lovely story of this beautiful chapel. It looks well worth a visit. Thank you, Ruth.

Thank you Susan and Caroline - yes there's something rather cheering about being guarded by Santa Claus, isn't there? Although on a ship caught in a storm I'd be grateful for help from anyone at all.