Some of you may recall that I have an interest in the history of plants, and particularly in the extraordinary adventures of the plant hunters. (To find previous posts on the subject, just put: Sue Purkiss, plant hunters, in the search box to the right.) So much so that my last book, Jack Fortune and the Search for the Hidden Valley, draws on real histories to tell the story of a boy who goes plant-hunting in the Himalayas at the end of the eighteenth century. The plant hunters were - and are - incredibly brave (some might say foolhardy!) and resourceful, so it struck me that they would be an excellent subject for a children's book - and so, I think, it proved.

So when I noticed that among the luminaries appearing at the Wells Literature Festival was one Ambra Edwards, promoting her new book The Plant Hunter's Atlas, I of course booked a ticket and sallied forth, a week ago, to find out more. 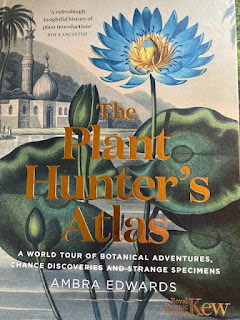 The book is published in association with Kew, and is lusciously illustrated with botanical paintings. As the title suggests, it is organised into geographical areas, and tells of the plants which were discovered (by the west: of course, indigenous people already knew all about them, and in many cases were indispensable in helping the emissaries from Kew and the Royal Horticultural Society in their mission to find new plants) - and the people who discovered them. So we meet old friends such as Sir Joseph Banks, who travelled with Captain Cook on his voyage to discover the Great Southern Continent, botanising enthusiastically, and fraternising possibly even more enthusiastically with the inhabitants of Otaheite (Tahiti), and on his return to England headed up Kew and was responsible for promoting the careers of scientists like the astronomers William Herschel and his sister, Caroline, as well as sending out plant hunters far and wide, in search of plants which would be useful for economic purposes as well as to ornament private gardens. Here too is David Douglas, who must have been one of the most unlucky plant hunters ever. He botanised in North America, and was subjected to storms, shipwrecks, dishonest guides, and every other plant-hunting misfortune you can think of, finally meeting a horrible end when he fell into a pit with sharp spikes at the bottom, designed to capture wild animals.

There are many more, but we are also introduced to some extraordinary plants. Take, for instance, the Corpse Lily, found in Sumatra. This produces 'the largest single flower in the world', which can grow to four feet across and weigh up to ten kg. It's a parasite, growing on the Indian chestnut vine: it takes more than two years to flower, and then the bloom - which smells of rotting meat - lasts for a mere week. Then there's Davidia Involucrata, the handkerchief tree, of which a single specimen was found by Dr Augustine Henry in China in 1888. He sent seeds back to Kew, but they failed to germinate, so in 1899 a young man called Ernest Wilson was sent to China to track down this one tree. He had to contend with an outbreak of bubonic plague and the Boxer Rebellion, as well as mountains and river rapids - but, astonishingly, he managed to find the site of the tree from a mere cross on a map: only to find that it had been cut down to clear the site for a smart new wooden house. Fortunately, a few weeks later he came across a small group of the precious trees. Imagine the relief!

The book is a treat, which I am still reading through - and Ambra's presentation was brilliant. But by coincidence, a few days ago another plant history treat came my way, when some friends invited us to go with them to The Newt in Somerset, an extraordinary garden created by South African businessman Koos Bekker, under the direction of Italo-French architect Patrice Taravella. We all know about Capability Brown and Humphrey Repton, who created gardens in the 18th century which involved the digging out of lakes, the rerouting of rivers - even the relocation of entire villages. Things these days are not usually done on this kind of scale, and this is why The Newt is so striking - it very much is a creation of that degree of magnitude. Everything is beautifully done, from the newly built tithe barn made out of warm golden stone which provides the reception area, to the curving elevated path made out of metal which takes you through the woods, to the gardens themselves - which of course were not at their best this week, but must look spectacular in spring and summer.

But the treat I mentioned lies at the end of that metal walkway. Inside a building which is tucked into the hillside, with a living roof, is a museum of garden history. And it's fascinating. Of course, it has extraordinary stories to tell. But it's the way it tells them too: it uses technology in a breathtakingly innovative way, so that in a relatively short space of time, you learn an enormous amount about garden history - from the Romans, through Islamic gardens, taking in Chinese and Japanese gardens, Eurpoean and British ones, right up to today. I'll let the pictures tell a little of the story.


it was a very dodgy enterprise to try and transport living plants across oceans.

Lovely post, Sue, and such beautiful pictures. 'Jack Fortune and the Search for the Hidden Valley' is a wonderful book which, as you know, I thoroughly enjoyed reading. I have recently given a copy to a friend's son as I think he will be really inspired by Jack - they also happen to live very close to Kew Gardens which they visit often, so a nice connection!

Ambra Edwards' book looks a real treat, especially with the illustrations. Now on my 'to read' list. And 'The Newt' is on my 'to visit' list! Lovely photos.

Tom Hart Dyke's World Garden at Lullingstone Castle is also wonderful - I got to know it when I was researching Lullingstone Roman Villa which is next door. I am sure you will know it well!

I've been there once. Of course, he's a plant hunter too. He ventured into dangerous territory in South America and was kidnapped, with a friend, by, I think, Farc rebels. After 9 months they let them go - but the two friends wandered about a bit and couldn't work out which way to go - so they went back and, rather apologetically, asked their captors for directions! Thanks so much for your kind words about Jack, and I hope your friend's son enjoys it!

I remember the terrible story of the kidnapping - such a relief that they eventually made it home safely.