I've been a History Girl since the very beginning and I've never landed on a really iconic date. That is about to change - I'm posting on November 5th!

History Girls before me have pretty much covered the whole subject. You can read previous posts here, including my post on Lewes Bonfire in 2014. I confess to cheating a bit on that one because my posting date was 18th of the month but Lewes Bonfire was such a spectacle, I had to write about it.

I was looking around, quite literally, for inspiration and found it on my kitchen wall. I have a Ravilious calendar and the illustration for this month is his painting November 5th. Painted in 1933, it is the view from the Kensington flat he shared with his wife, Tirzah.

This painting immediately took me back to the garden of my parents' semi detached house in 1950's Solihull. After Christmas and my birthday, Bonfire Night, or Firework Night (the terms were interchangeable - we never called it Guy Fawkes Night) was the most important event in my calendar. Without in any way realising it, I was following the ancient festivals of the year's turning: my birthday is a few days before Midsummer, Bonfire Night is the Fire Festival that marks the start of winter and Christmas is the Winter Solstice. In those days, children seemed closer to the Old Ways. We played out all the time and were very attuned to the seasons. I would be looking forward to Bonfire Night as soon as summer was over. My friends and I would be making preparations from the beginning of September, buying fireworks as soon as they appeared in the shops. My favourite brand was Brock's. 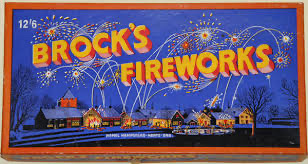 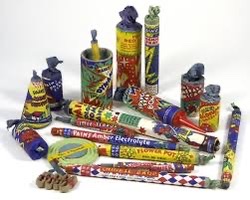 My favourite fireworks were Bangers,  Roman Candles, Mount Vesuvius Cones and Rockets. My brother's favourites were anything that made a very loud bang. I wasn't so keen on those, neither was the dog, but my brother was older than me and had more money, so he could afford Big Bangs. No-one liked Catherine Wheels, they were hard to light and fell off the fence. I also liked Sparklers and the strange and rather pointless Bengal Matches, does anyone remember them? 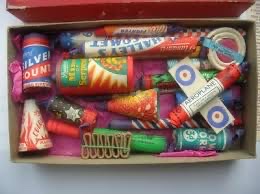 We would spend September and October collecting wood for the bonfire that my father built in the back garden. Adults would join in with this and donate any old wood that was lying about and any cuttings, clippings, pruning from the garden or the allotment. We would also collect clothes to make the Guy. An old pair of trousers and a jumper my mum stitched together and filled with newspaper, a stuffed stocking head and face and an old hat (it had to have a hat).
The bonfire would be constructed in the back garden, the guy perched on top. Dad would light the fire and when it was going well, all the conkers we'd collected through the Autumn would be thrown on to pop and crackle. It was a neighbourhood affair and everyone would be there. The dads let off the fireworks, we weren't allowed near them and we would wave sparklers. Last to be lit were the rockets and then we would have the sausages, baked potatoes and gingerbread that my mum had made. All over for another year. Well, not quite. We would spend the next day combing the streets for spent rockets, for some reason the sticks were highly prized.
This year, I'll be staying in but I might make my mum's gingerbread, very dark and sticky with molasses, for old time's sake.
Stay safe and look after the cats and dogs!
Celia Rees
www.celiarees.com

I think local scouts and gangs of boys took the collecting of wood very seriously, and any children wheeling a"guy" around in a borrowed pram or pushchair had to have made a good effort if they begged for any pennies. "Call that a guy?" was the dismissive remark.

"Squibs" were nasty little fireworks: small snake-like fireworks that were lit and thrown along the ground or more often into crowds at ankle height to sanp and bang, although the beautiful catherine wheels often came unpinned from the wall and carried on spinning, veering about in the dark garden.

It was a time for screams of fear, as well as all the "ooohs" and "aahs" for the gold or silver fountain fireworks - though some ended with sudden bangs. Roman candles?

A delicious feeling of loosely-managed danger clung to the day, a smell of smoke and damp and cooking that hung about to the next morning, and always newspaper articles afterwards about children injured because they picked up an apparently unlit firework.

I love this Ravilious image. Thanks, Celia.

Thanks for sharing your memories, Penny. I love the 'loosely managed danger' - that's exactly right! And being out at night - so exciting. I loved the silver and gold fountains too, all of them, really. We called squibs Jumping jacks and boys used to throw them at people's ankles - severely discouraged by grown ups but they weren't always about...

Thanks for sharing your memories, Penny. I love the 'loosely managed danger' - that's exactly right! And being out at night - so exciting. I loved the silver and gold fountains too, all of them, really. We called squibs Jumping jacks and boys used to throw them at people's ankles - severely discouraged by grown ups but they weren't always about...