'I need to know its story!' declared my daughter one weekend recently, as she prowled about the house, picking up this and that ancient object that had first settled into her consciousness when she was small.

'Where did this come from?' she asked, holding up a black and white quill box.

Knowing the provenance of objects and their "story" is in her training as an archaeologist, and her working life, in a major British university's museum service.

‘Tell me.’ She didn’t add, 'Before it’s too late,’ but that of course is the subtext to her desire to “know”.

I’m not terribly ancient but time marches on, and I understand only too well what happens if you don’t ask questions when minds are lucid enough to recall the answers. They eventually become so dimmed that recall is impossible and then, at length, of course the minds have gone altogether and the opportunity for enlightenment is lost.

I know. I allowed it to happen with my own parents.

It’s easy enough, amidst the hustle and bustle of the present, and concern about the future, to let the past slip away into obscurity. Does it matter? On one level, perhaps not, not with all the crises and dilemmas of twenty-first century life occupying our consciences and jangling our nerves.

But, if we focus only on the present (and the future), and overlook the past, the day may come when there’s no one left with the memories to bring it back to life.

We have many artefacts in our house, most gathered over my lifetime and my husband’s. A number of them are truly ancient: my husband is a geologist with an enduring fascination for the form and wonder of rocks and fossils. Artworks of varying forms and old books have also been garnered over the years. The value of these objects is not of course measured in monetary terms but in their beauty, or in their particular fascination – in the sheer pleasure they give us, not in owning them but in simply being able to enjoy them.

All these objects will, I am sure, in time claim our children’s interest.

But, right now, it is the “old things” that arrived in our house through inheritance from earlier generations that are attracting my daughter’s particular interest. None are I think especially valuable monetarily, but several are pretty old, and are certainly intriguing. And my daughter wants to know where they came from, how and when they were acquired, both originally and by me, and how they fit into the family’s history. In other words, their “story”.

However, to my shame and deep regret, I don’t know all the answers, because I failed to ask the questions when I had the opportunity.

The rightmost elephant is not the largest of the elephants that I remember. When I was a child, they lived in my maternal uncle's house, parading across the wide brick hearth in his spacious dining room. Of course your perception of the size of objects as a child is distorted by your own small stature, but I am certain that a four-year-old could sit easily on the largest elephant in that room. Where that one went, I do not know.

But my mother, and later I, acquired these four. The largest, at 10.5 inches (27 cm) high to the top of his head, is very heavy. The tusks, toenails and eyes are ivory. Were they made in India? Possibly in the nineteenth century? I suppose so, but I regret to say that I don’t actually know. My maternal grandfather had a wanderlust as a young man. He was a hairdresser (“Monsieur Arthur, Coiffeur”) and chiropodist who travelled the world on ocean-going liners, tending to the feet and crowns of some famous people. (I have a photograph signed by Jan Smetana, the composer, addressed to M. Arthur! Not that Arthur was my grandfather’s name but I suppose it sounded hairdressery at the time?)

Anyway was it grandfather who brought the elephants back to England? It’s hard to imagine how, logistically. Would the “ride-on” elephant have even fitted inside his trunk? (Sorry, no proboscidean allusion intended.) Yet, how else did they get back to England? How frustrating it is not to know the answer! So my daughter has to be content to know that they have been in her family for at least a hundred years, and have lived in the consciousness of at least three generations, her grandmother, her mother and her. That is as much story as we have about these proud beasts. What a dreadful pity. And what a loss, not to know much more.

Here is another object that might (or might not) have come to England in the luggage of my maternal grandfather, the itinerant hairdresser. It has been in my consciousness since I was very small and is one of my daughter's favourite objects. I actually knew nothing of the origins of the box, but Wikipedia tells us:

“Porcupine quill boxes are decorative trinket boxes, which are finely inlaid with ivory discs and porcupine quills between bands of ebony. They were highly valued for their rich timbers and intricate craftsmanship.”

The boxes were produced in Ceylon (now Sri Lanka), largely between 1850 and 1900, originally made for English residents but, by the late nineteenth century, a thriving export trade for such artefacts had grown up. Apparently there is one in the Victoria & Albert Museum, in London, which was given to Queen Victoria.

The number of ivory dots and their close proximity together are a good indication of a valuable box. The finest boxes may have an ivory disc positioned every one fifth of an inch (0.5 cm) on all of the ebony borders. By contrast a lesser box may have dots one inch (2.5 cm) apart or more. I guess that’s ours!

Wikipedia says that boxes with broader quills are less valuable than those with fine quills, and some quills have distinct dark and white bands and others are with plain white.

Our box is 6 inches (15.25 cm) by 4 inches (10 cm), but they were commonly made up to 11 inches (28 cm), and some could be even larger. It was commonplace for the timber used to be poor and therefore warp, but this is not the case with ours. It is well over 100 years old but the wood looks as sound and blemish free as the day it was made.

Knowing that these boxes were made in Ceylon, we deduced that perhaps my grandfather picked up this box on his travels. But did he ever go to Ceylon? Might my third object give us a clue…? 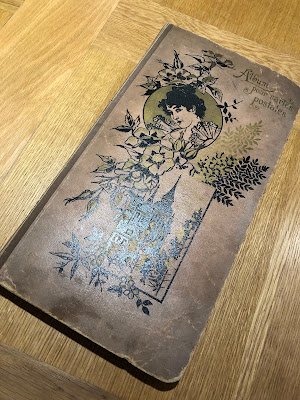 The three hundred cards in this postcard album date mostly from between 1900 and 1907, although the earliest I have spotted is 1899. They are a mix of postcards sent by my maternal grandfather to members of his family, those sent to him by relatives and friends, and postcards with interesting images but no addressee or message. Many are cards my grandfather sent to his girlfriend (my grandmother) then, later, his wife (same lady) and first child (that maternal uncle of mine with the elephants), from wherever he was working. Sometimes that was in England, and often abroad. So, to some extent, the cards are a record of his travels. The cards that were sent to him also contribute to the record, because the addresses given for him are in many different places around the world.

I will confess here (this blog post really is a sorry outpouring of guilt!) that I have not so far taken the time to curate, as they say, these cards. They are slotted into the album in no particular order, and have certainly been that way for decades… If I could at least organise them into date order, I would gain a better picture of my grandfather’s journeying.

Part of the “problem” of curating them, however, is that many of the cards’ messages are written in Danish. My grandfather was from Odense, in Denmark, my grandmother from Schleswig-Holstein. I don’t speak Danish… And the writing on the cards is often miniscule, as the writer strove to fit as much message as he (nearly all “he”, I think) possibly could around the image. In many cases it is also quite faded. Well, they are 120 years old… I really would like to know what they say, because quite a number of the Danish ones include family photographs. (Interesting that you could use such a photograph in those days to make a postcard…)  In this example, I do recognise some of the individuals: one of my grandfather’s brothers is standing on the left, and my maternal great-grandparents are in there too. But I don’t know what the message says… One day (!) I really should ask one of my Danish cousins to translate… 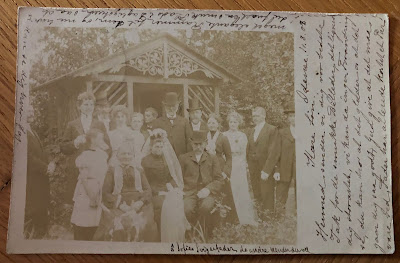 However, the Danish thing is a slight red herring, as the dates are not "in Danish" and I could at least take that first step...

Anyway, in my view, it is a rather wondrous thing, this album. In many cases, the messages aside, the pictures alone are intriguing, giving a window onto the differing cultural lives of the times and, in some cases, on the history of the place. Such as a series of cards from Switzerland and another series from Chinatown, New York, and a number of cards sent by my grandfather from Kingston, Jamaica in April 1907, showing the effects of the earthquake in January, which killed 1000 people. 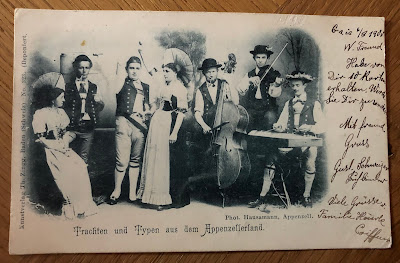 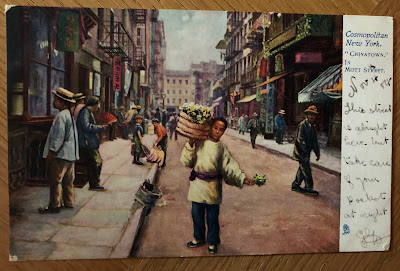 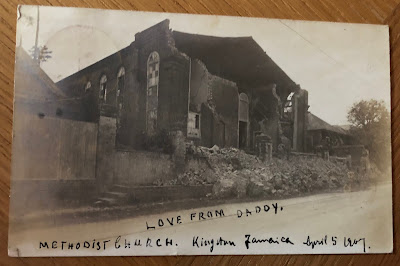 Anyway, I introduced the postcard album to you with premise/promise that perhaps it might tell us if my grandfather went to Ceylon, where he could have purchased that quill box... So my daughter scoured the album for a card sent from Ceylon, and she found one! But, frustratingly, it wasn't from my grandfather at all but sent to him, and the sender was not I think a relative but a friend. Did that man bring the quill box back from Ceylon? Or is that postcard just another exasperating red herring... I will never know.

The History Girls are writers, mostly, though not all, writing fiction, either invented (but historically authentic) worlds about entirely fictional characters (like me), or reimagined lives of real individuals. Basically, we are all storytellers. Which is what makes my tale here rather sad. Despite my being “a storyteller”, I have failed to keep my own story, that of my family and my predecessors, alive. I have permitted it to wither, not through lack of interest but simply lack of purpose. I must make an attempt to address some of the withering at least. And, just as importantly, I must ensure that the stories of those things I do know about, the artefacts that we have gathered together through our lives, are not lost. So when, decades hence, a grandchild asks the question about the 160 million-year old ammonite or the Greenlandic soapstone sculpture or the hardwood African mask, he or she can be told how it was they came into the family.