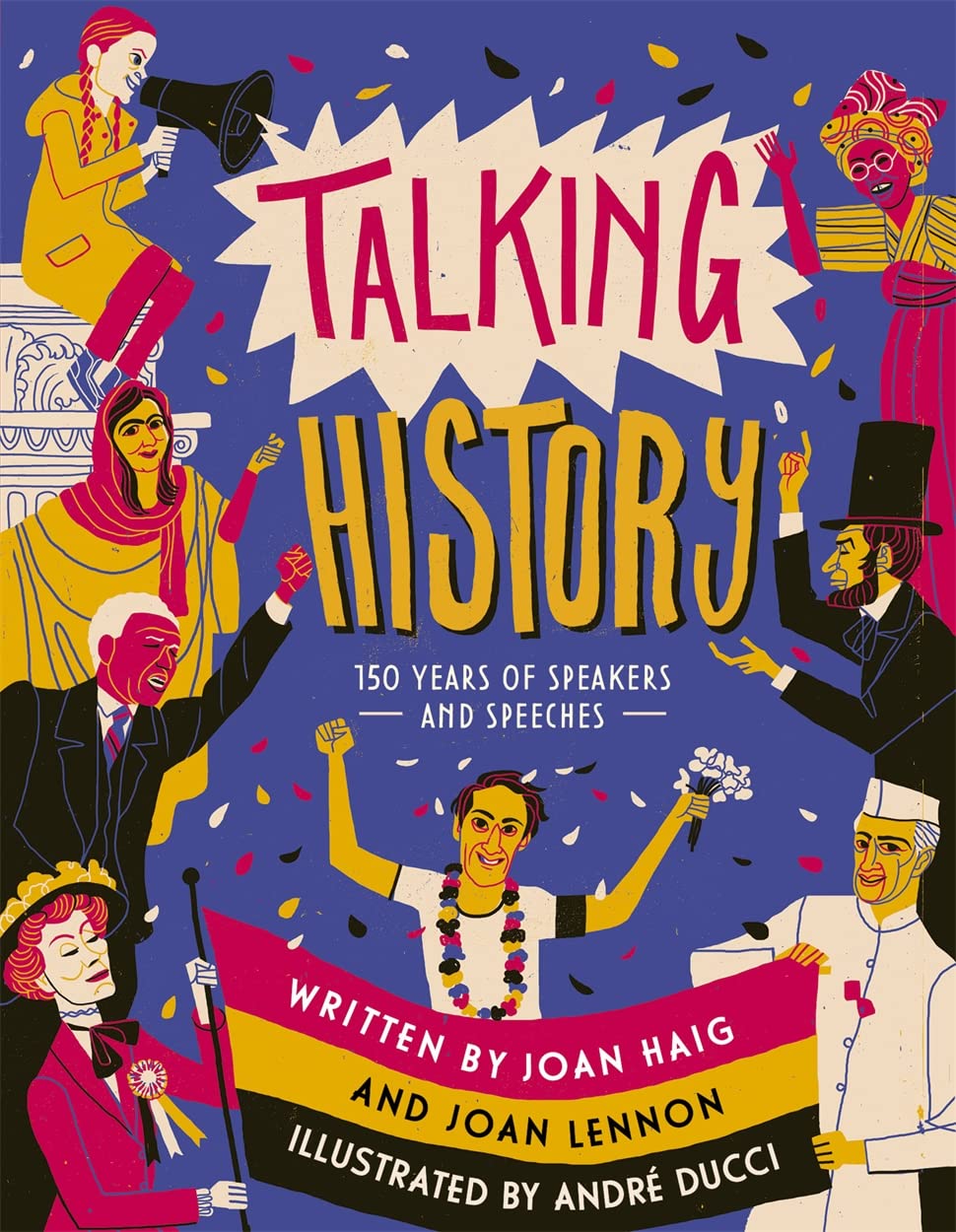 Joan L. to Joan H.:
How did you get the idea for this book?

Joan H:
I was on the lookout for a kids’ book on famous speeches – but the book I was looking for didn’t exist. So, over pots of tea, we put our heads together and decided to write it ourselves!

Joan L. to Joan H.:
Do you remember those first versions of the book – the coloured pen diagrams on big sheets of paper that we did on your kitchen table? We were so excited – and so rubbish!

Joan H.:
I still have some of those original scribbles we made! Thank goodness they asked André Ducci to do the artwork!

André:
Illustrating this book was one of the coolest projects I’ve participated in for bringing together history and social causes, subjects particularly interesting to me. In addition there was the possibility of learning - after all many of the personalities portrayed were unknown to me.

The difficulties, however, were not a few, starting with the challenge of representing so much information in a few pages.

Joan L. to Joan H.:
We found that too, didn’t we? And only having room for 16 amazing speeches out of so many was hard too.

Who didn’t make it into the book that you wish could have?

Joan H.:
I still have the first list of speeches we drew up. On it was an emotional surrender speech by Chief Joseph of the Nez Perce or Niimíipuu people of North America. Like the speeches that did end up in our book, the speaker’s voice is distinct and carries us back to a powerful moment in history.

Joan L.:
Early on, I was keen to have a section on technology – a history of who hears what and how, and how can you trust the source. Newspapers, the invention of photography, radio, cinema newsreels, TV, internet and social media. In the end, there wasn’t room in Talking History – and really, it’s more of a whole new book on its own!

Joan H. to Joan L.:
What favourite story about the speakers who are in the book wasn’t there room for?

Joan L.:
There was the one about Abraham Lincoln’s beard. All American Presidents have been men so far, but only 5 of them had beards while in office - and Abraham Lincoln was the first! There is a story that, during the campaigning for the election, an 11-year-old girl called Grace Bedell wrote to Lincoln and suggested he would look better with a beard. She couldn’t vote, being 11, but more importantly she never would be able to vote, being female. Still, ‘All the ladies like whiskers and they would tease their husbands to vote for you and then you would be President.’ That story really makes you think!

Joan H.:
In the book, we write about how Winston Churchill had special false teeth made to help him keep his distinctive lisp. But here’s a bonus fact – one set of his upper dentures sold at auction in 2010 for over £15,000!

And what about favourite chapters from the book – did you have one?

Joan L.:
If I had to choose just one, maybe it would be the chapter on Helen Keller. The 1962 movie The Miracle Worker had a big effect on me when I first saw it and ever since. I love the way Helen Keller was interested in so many issues, equal rights but also votes for women, the fight against racism, an end to war. And the story of Braille is a fascinating one.

André:
It's a hard task to choose a favourite chapter, but among them is certainly Funmilayo Ransome-Kuti's. It is one of the chapters that moved me most during its execution and that turned out to be one of the most beautiful as well. 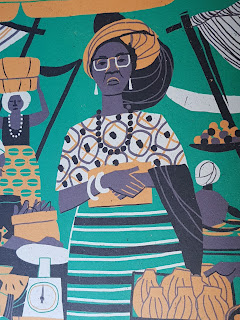 Joan H.:
For me, I think it would be Nelson Mandela’s ‘Statement from the Dock’. I grew up in Southern Africa and he was one of my childhood heroes. Perhaps because I already knew so much about the story, I also found it one of the hardest chapters to write – we couldn’t include everything!

Joan L.:
Some of the chapters were definitely harder than others. There was such suffering in the backgrounds of so many of the speeches that we tried really hard to be true to. And yes, each chapter could make a whole book on its own!

Were there some chapters that were harder than others to illustrate?

André:
To portray the speakers in such a way as to maintain resemblance was not always a simple task. In some cases reference photos were missing, as happened with Pearl Gibbs. In others the person is so present in the media that it becomes very familiar, which requires more attention to be portrayed properly, as it was with Greta Thunberg.

Curiously I think the easiest one to portray was also the first chapter in which we worked, the one about the great Abraham Lincoln! 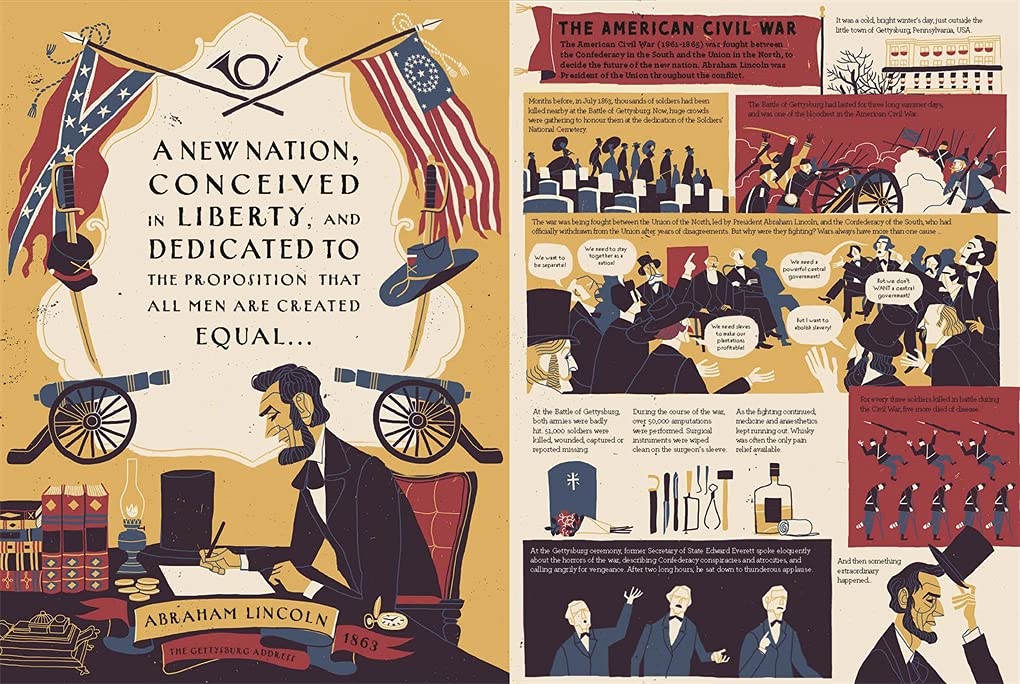 Joan L.:
Sometimes things that would take many words to get across were made clear with a single image.

It’s hard to choose, but do you have a favourite bit of André’s artwork?

Joan H.:
André makes big, bold statements, but there are also little gems - like the cat and mouse image in the chapter on Emmeline Pankhurst. 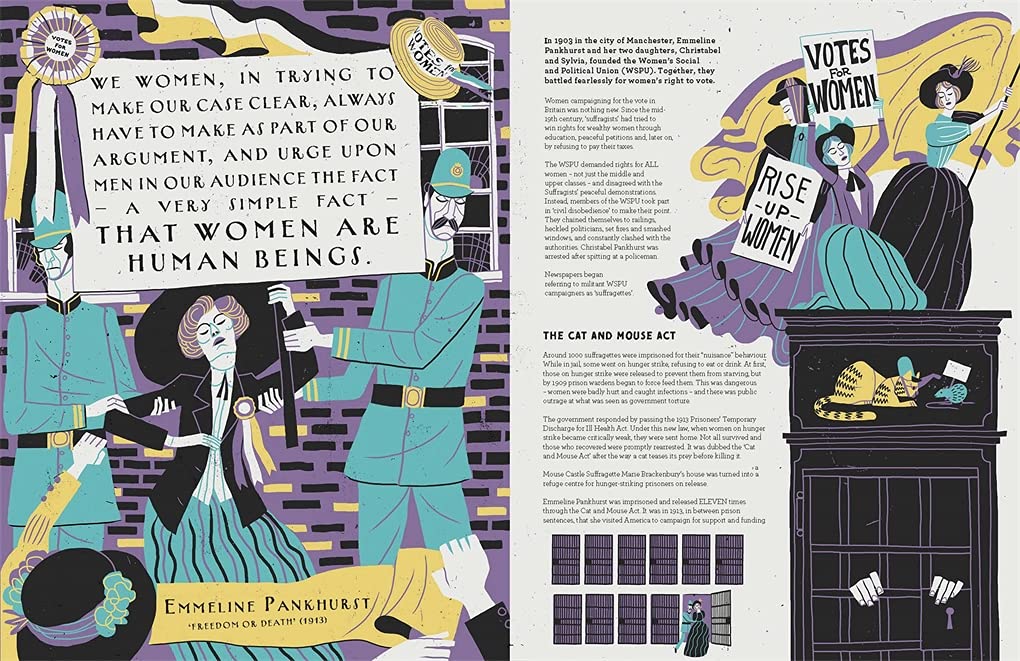 I would love to have a framed print of each chapter opening - they would definitely brighten up my walls!
Joan L.:
I love André’s sense of humour, too. In the parade scene in the Harvey Milk chapter, he drew a big floating dog balloon, in honour of Milk’s Pooper Scooper bill. 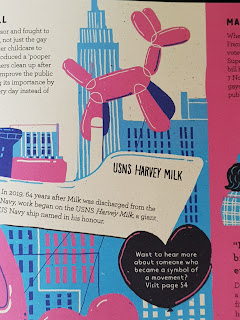 And the way each chapter had different colours and layouts – there was never a dull moment!
From two Joans and an André – we hope you enjoy Talking History as much as we have!

And when will these three meet again? There is another book in the pipeline from Joan Haig, Joan Lennon and André Ducci… Watch this space!
(This is an extended version of an article written for Paperbound Magazine.)

Love the sound of this!

This looks like a wonderful, vibrant book - congratulations to you all!

Enjoying finding out more about the choices you made for you book, Joans, and good to hear the illustrator's thoughts too. Thanks!