Is this even the right place? Sheena Wilkinson

Last week my husband, his three sisters and I set out to walk to their late mother’s home place – the small one-storey farmhouse where she had been born and reared until she married in 1962, in a place known locally, though not on any maps,  as the Muck (which doesn't sound pretty, but possibly comes from the Irish for pig). Shortly afterwards, the house was abandoned. It may already have been run down; the lane was too far from the road; it was the sixties, and the appetite was for new bungalows, not damp old cottages. There are so many places like it all over Ireland. Their skeletons have become one with the landscape – houses fallen into roofless walls, walls tumbled into ditches and buried under ivy and nettles. I wrote about it here a couple of years ago. ( https://the-history-girls.blogspot.com/2019/03/history-where-there-isnt-by-sheena.html)

But this was different: this was a house whose descendants still live in the same area. And yet my husband had never been here in his life. There was uncertainty as to whether we even had the right place, much checking of the landscape against her long-ago stories – could that be the hollow where the dog fell through the ice and drowned? Was that the path she would have taken up to school? We discarded the other two or three abandoned houses in sight – that one was too big; that one too small, only a byre, and the other one still had a roof and walls so did not fit my late mother-in-law’s description of ‘a ruin’. 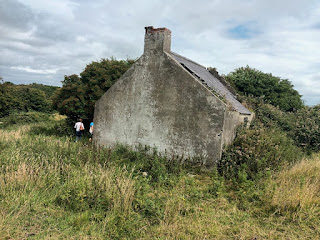 The August landscape was stunning – we had walked up a lane bursting with wild raspberries and honeysuckle, leading to a land of undulating green drumlins, yellow fields of stubble, with the dark shadow of the Mournes in the background. A piebald cob and his friends grazed the field where the house lay derelict, fresh dung suggesting that they used its walls for shelter. We clambered over nettles and stones, marvelled at the tree growing right up through what might have been an outhouse, argued about which way round the house faced, looked up with some trepidation at what was left of the roof – would it withstand our visit? 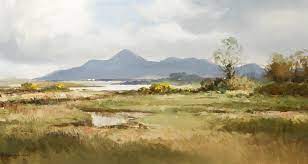 How could you not have been here before? I demanded. Surely you were interested in where your mammy grew up? I suppose, for a child, a long walk up a lane to an empty house wasn’t that exciting. But I could have stayed all day, trying to reconstruct the house in my mind, noticing how the stone walls had been panelled over at some stage; trying to work out if the room we stood in was a living room or a bedroom -- the small fireplace suggested the latter; wondering what would have hung from the hooks which clung stubbornly to the remains of a door. The people who lived here died before I married into this family, but I knew their names and had seen their photographs.

How long does a house sit derelict before it stops being sad and starts being interesting?

I don’t think it ever stops being sad. 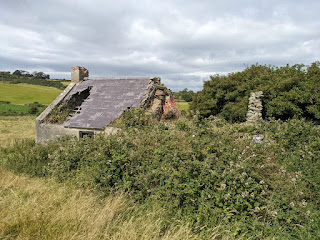 I don't blame my husband for not making the pilgrimage earlier, when his mother could have filled in the blanks for us. Not all children are budding History Girls, as I had been, pestering Mummy for stories of the olden days – her girlhood in the fifties and sixties, and my granny for tales of the real olden days – she was born in 1908. The houses they told me about – the big house in Irish Street, Downpatrick where my granny took in lodgers; my other gran’s more modest terraced house in east Belfast – are long gone too, and not reclaimed by the kindness of nettles and grass, but demolished and built over.

I will return to the Muck. It's not my family history, not really, but these old houses and their secrets are everyone's history.

Posted by Sheena Wilkinson at 05:30