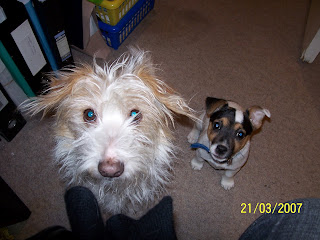 Our current dogs, Crumble and Blackberry, are integral to my life, yet are of little interest and no importance to anybody else apart from my children, and not to all of them. That's how it is with dogs. Unless they're yours, you pat them (if you have to) then hope for some reciprocal ignoring. Other people's dogs are just that - other people's dogs. Dogs are also the keepers of most of the world's secrets. They witness our most unguarded moments. They hear all our conversations. A listening bug attached to a dog would be terrifyingly revelatory.

The history of the domestic dog is some 33,000 years long and for no particular reason I can discern, I’ve recently found myself wondering about the first dog whose death caused his owner to cry. If dogs wrote history, that would surely be their eureka moment. From then on, dogs had power. Few people would risk their lives to save a sheep. Most of us would to save our dogs. Dogs know this.
We know it too, which is why historical novelists use dogs so often. A fictional dog is a surefire arrow into the reader’s heart.

In Hilary Mantel’s Wolf Hall, for example, the very second young Thomas Cromwell hears Bella barking and thinks ‘I’ll miss my dog’, he springs to sympathetic life. It’s a masterly trick, and it’s on page 1. To punch the gut in novels about Mary Queen of Scots, authors use the dismay of the little Skye terrier huddling underneath her skirts as she lays her head on the block. That poor wee creature, we all exclaim. In some history books we're told 'it died soon after', and we immediately infer a broken heart, just like Greyfriars Bobby's. I wonder if anybody told Elizabeth 1 about Mary's dog. Unwise, perhaps, in those times. Causing the monarch to weep might have suddenly become a treasonable offence - the Elizabethan equivalent of the Dangerous Dogs Act. 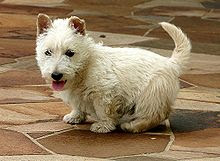 I don't know about you, but I can’t read anything about Laika, the 1957 dog-astronaut, whose one-way ticket into space ended in incineration as the satellite re-entered Earth’s atmosphere.
The blurb 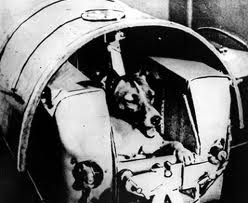 of Nick Abadzis and Hilary Sycamore’s children’s book is enough. It reads: Some violence. Sad ending. I’m almost crying now.
Dogs creep into my books as Blackberry and Crumble creep into the drawing room: Gryffed, in the de Granville Trilogy; Brees, in Perfect Fire; another Gryffed in Hartslove. They don’t spring out of my head and I don’t base them on my own dogs. Jack Russell terriers shout twentieth century to me.
I find my medieval dogs in tapestries. Brees came from the Burrell Collection. Gryffeds One and Two from La Dame à La Licorn in the Musee de Cluny in Paris. 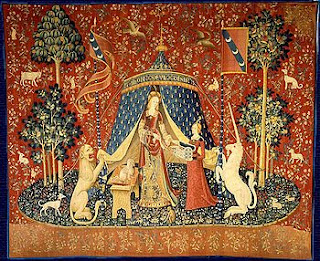 I peered amongst the stitches, and there they were.
I expect only their owners cared about them during their lives, but now they’re historical dogs, I hope their appeal has broadened.
I'm sorry to say that Crumble and Blackberry have no interest in historical dogs. Their interests lie entirely in a limited present, comprising things to chase, things to eat and things to sleep in. Or so it appears. But who's really to tell, since although they know all my secrets, I know absolutely none of theirs.
Posted by K.M.Grant at 00:10

I've never owned a dog & yet as a child (& still now!) the story of Gelert, the heroic dog of Llywelyn, struck me to the heart. Mary Queen of Scots with the dog hiding in her skirts got me too. I've never thought about the role of dogs in this way. Thank you, from a cat person, for this wonderfully woofy post!

All dogs are precious!
And there are some very wonderful stories out there about other royal examples - but I'm not going to say too much as I'm working on a book about it at the moment!
As for Laika - the whole thing is just too hideous. Like you, I can't bear to contemplate it and when I see people wearing Tshirts with her name and image I just feel like going and giving them a good smack I'm afraid.

Jeanetter Winterson's Weight gives Laika a happy ending - it's very poetic, and rather lovely, though I then get depressed when I remember the reality (and I'm not a dog person - my loyalty belongs to cats - but what was done to Laika was horrible)

Oh Gelert! Heartbreaking. And Greyfriars Bobby! I'm a dog person, and can't begin to contemplate poor Laika (seeing the dark scared eyes of Rosie, our beloved first Dalmatian, peeping out of her crate as she headed for the aircraft that was going to take her from the US where we'd been living, back to England Home and Beauty where we were returning - that was bad enough, even knowing as we did she'd be perfectly safe...)

I agree - Laika was simple unnecessary cruelty. Did she volunteer for the trip? of course not. I adore the Lady with the Unicorn dog, too, that is, the little Maltese terrier one has enormous personality, though the Unicorn is my absolute favourite animal there, and the monkey, and the fox.

I think history, for a dog, is in scents - who has been this way - who has peed on this lamppost and left a message. Considering they greet you as enthusiastically when you return from popping out to put a letter in the box as they do after a week's absence..their sense of time is not ours. But I guess a faint scent tells them something about its age, and that would add up to a canine sense of history. Also - I imagine, they have an idea of the age of a buried bone?

Oh, eek! I'm just writing my first dog in my current novel, and now you've exposed it for the transparent heartstring-pulling it really is! *Now wondering if it will work with a camel, but rather suspecting not...*

But great post, even though I too tend to tear up at the mere mention of Laika. But there are lots of happy-ending dogs in history, and one of my favourites is Bobbie, survivor of the Battle of Maiwand. If you scroll down to near the bottom on this page http://www.britishbattles.com/second-afghan-war/maiwand.htm you can see a photograph of Queen Victoria herself giving him a medal.