From the Sketchbook: Stealing History 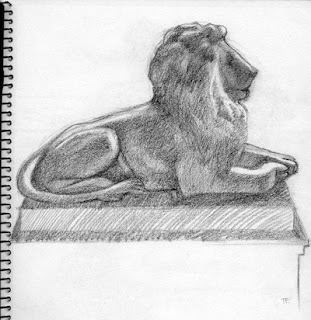 By Teresa Flavin
When a bronze head was stolen from Glasgow’s Kelvingrove Art Museum on a Sunday afternoon last month, I was taken aback. The Kelvingrove buzzes with visitor activity on weekends and the idea of someone swiping the late Gerald Laing’s Dreaming from under the noses of so many people seemed ridiculous. But it happened.
One wag suggested that the thief was on his way to visit scrap metal dealers with the head in a bag, but only a few days after the incident, police were given an anonymous tip off and the sculpture was found near the museum. I visited the Kelvingrove when I heard that Dreaming had been rescued, hoping to see it for myself, but was told that it wouldn’t be back on display until it had been cleaned and checked over. There was a bit of speculation that the theft had just been a prank. Whatever it was, at least there was a happy ending.
This cannot be said about countless other thefts of art and objects around the world. Interpol’s December 2011 poster for “The Most Wanted Works of Art” lists six items stolen between July and October last year and provides a chilling snapshot of “cultural property crime”. It includes a painting by Jan Brueghel the Younger from a Paris gallery, a Renoir from a private home in Washington, D.C. and a statue from a museum in Damascus. One can imagine thieves planning these “capers” and executing them, Hollywood-style, despite guards and high-tech security systems.
We are familiar with the brazen thefts of famous paintings like Edvard Munch’s The Scream (one version was stolen in 1994 and the other in 2004) and Cezanne’s Auvers-sur-Oise taken from the Ashmolean Museum on the eve of the Millennium. As a former Bostonian, the crime that still haunts me is the unsolved theft of thirteen masterworks from the Isabella Stewart Gardner Museum. Every time I visit, I am drawn to the empty frames kept on display and mourn the loss of the Rembrandts and Vermeer’s The Concert. We know and love these paintings; their disappearances make headlines, not least because of their popularity and huge commercial values, but also because the public enjoys an unsolved mystery.
Looking at the rest of Interpol’s “Most Wanted” list, one might be surprised at the other three crime scenes; an icon and a statue were taken from monasteries in Athens and Ulaanbaatar and the magnificent Codex Calixtinus manuscript vanished from a safe in a Spanish cathedral.
If you search the “Recent Thefts” section of Interpol’s website, you will find photos of a cuneiform tablet from Iran, an imperial order from Suleiman the Magnificent in Turkey, ornate French clocks and many ancient oil lamps, wheels, figurines of bulls and horses stolen from the Museum of History of the Olympic Games in Olympia. These items may not have the cachet of a stolen Vermeer or Munch, but they deserve their share of attention.
There is further sobering viewing under many sections devoted to stolen Iraqi and Afghan items. War and deprivation have brought not only the tragedy of lost lives but of lost history. Greece is suffering the theft of artefacts as its financial crisis worsens and staff cuts have left its collections vulnerable. The authorities recently decided to stop excavating some antiquities, and to rebury others, in order to protect them.
Last weekend the heart of St Laurence O’Toole, preserved since the twelfth-century in a heart-shaped wooden container locked inside an iron box, was stolen from Christ Church Cathedral in Dublin. This relic of Dublin’s patron saint has attracted pilgrims since medieval times. The thief is believed to have hidden overnight so he could do his dark work undisturbed. Uninterested in the church’s gold chalices or candlesticks, he cut through iron bars to get at the heart and take it away for his own, or someone else’s, purposes. It’s a powerful and disturbing image.
Cultural property crime is estimated to cost $6 million annually. But the loss goes beyond money. When a unique object vanishes, it’s as if one small part of our human memory goes with it. The twelfth-century Codex Calixtinus tells us the story (and shows us illustrations) of pilgrimages to the tomb of St James the Apostle. The nineteenth-century wall clock teaches us how clockmakers innovated and perfected timekeeping. That simple clay oil lamp connects us with makers of the past and opens up our imaginations.
Teresa Flavin is the author of The Blackhope Enigma and The Crimson Shard, art historical fantasy novels for age 9 and above. This month’s charcoal sketch is of one of the stone lions inside the Boston Public Library, which Teresa hopes is far too large ever to be stolen. She is currently working on the final book in the trilogy.
Posted by Teresa Flavin at 00:15

Such things are so depressing. Thanks so much for really interesting post, Teresa.

I agree. This is a timely & thought-provoking post. Thank you!

Important but very sad thoughts about the loss of such cultural treasures. Three years ago, at an ancient site in Gujerat. Several of the small museum's more interesting items were missing, apparently being "looked after by experts". Among such rural poverty, I could not help wondering if they truly were. How long can somehing be away being studied? Were the objects lost or being protected? Nor does it mean that the poor were involved.

Very glad to read that Laing's "Dreaming" was recovered. So beautiful!

(Replying to this after the post above, it's reassuring to discover I can scroll up and down the text.)

Yes, it's a horrible thing.

A large and very beautiful Barbara Hepworth bronze was stolen the other day, from my local park in Dulwich: I didn't know till I happened to be there, and saw the stump of it. It was almost certainly melted down for scrap within twenty-four hours. That's one artwork which isn't going to be found in someone's attic fifty years from now.