NEWES FROM THE DEAD - Mary Hooper 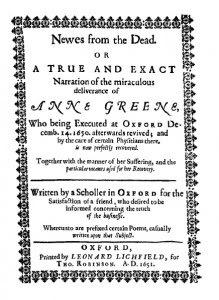 I like to have real people in my books, but usually they
only have walk-on parts. NEWES FROM THE DEAD was my only book to be based on both a real-life person and a real-life incident, and is the name of a pamphlet sold in the 17th Century to record the words of someone who was purported to have died and then come alive again. As this someone – a young woman named Anne Green – was a
convicted murderer who’d been hanged, her recovery was thought to be a direct message from God to show that she was innocent.
In December 1650, Anne Green was a lowly servant at the house of Sir Thomas Reade, a powerful land-owner in Oxfordshire. Anne became pregnant by Sir Thomas’s grandson, a “forward” seventeen year old scholar, and terrified and alone, miscarried in the outside privy after six months. The baby (as later a midwife certified) never drew breath, but Sir Thomas was told of what had happened and, fearing for the marriage prospects of his grandson, had Anne despatched to Oxford gaol to await trial for infanticide. Anne was found guilty and sentenced to be hanged. What was more, as a convicted felon her corpse was then going to be taken to be dissected. Interested parties: Oxford medics and scholars, apothecaries and anyone who could afford a viewing ticket, could come along and watch.
The day came. The hanging was a public one held in the courtyard of the prison and some of Anne’s family and fellow-servants came to support her. Admitting that she had sinned by sleeping with a man - but still pleading innocence of infanticide, Anne was hanged, at the last calling upon God to convey her quickly to Paradise. After thirty minutes a doctor certified that she was dead, then she was cut down, placed in a coffin and taken to a room over an apothecary’s shop in Oxford.

Interested parties gathered in the small, cold room; the two principal doctors picked up their instruments to begin cutting...and then Anne made a “raddling noise” in the back of her throat. One doctor said it was merely some air coming back from the lungs. A student thumped on her chest to help bring up the rest of this and the instruments were wielded once again. But then Anne’s eyelid was seen to twitch.
This presented the doctors with a dilemma. Should they proceed
with the dissection and “finish her off” or try and revive her? There was
consternation in the room, shouts for and against. Sir Thomas Reade was keen
that she should be re-hanged, others agreed, saying that she belonged to God now
and he must have her, yet others said that she had miscarried, not given birth,
and her trial had not been a fair one.
For me, the best part of writing a book is the research, and
it certainly proved so in this case, for I seized upon details of Sir Thomas
Reade’s house and family, of the doctors that were present, of the hour-by-hour
care of Anne, of her very gradual recovery and of attempts to turn her into
some sort of prophetess and the book almost wrote itself. I even found out that

Christopher Wren, then a seventeen year old scholar, had been present at the dissection
and written a poem about it.
Anne did recover, and with the money collected from the interested parties who came to see her, appealed for and was granted a pardon. As for wicked Sir Thomas, he was taken ill and died two days later, which seemed to be further proof of Anne’s innocence.
Anne married and earned a living travelling with her coffin and telling her tale at various taverns. She died in 1665 (which is the year of the Great Plague, of course) but I have been unable to find how she
died or where she is buried. She remains the most fascinating person I have ever written about.
Posted by Mary Hooper at 01:00

Travelling with your coffin sounds a mesmerising USP for a kind of "author tour". Enjoyed your Newes very much, Mary.

This sounds fascinating, if very unsettling!

I love tales of 'half hanging' and this one is heartbreaking despite the happy ending. If you've come across the Newgate Calendars, there's a fascinating case of a man tried and hanged for supposedly killing his uncle - except that the body was never found. He, too, survived execution and ran away to sea. Much later, he was reunited with his very much alive uncle who, it turned out, had had a bad nose bleed in the middle of the night and went to the horse trough to wash. As he cleaned himself up the navy came along and conscripted him. The uncle agreed to return to England to prove his nephew's innocence but was drowned at sea before he could do so. You couldn't make it up, could you? (Which is what a radio producer said to me when she turned it down for an afternoon play...)

The thought of poor Anne Green facing execution while the father of her child had no comeuppance at all is so terrible & so horribly unsurprising... Thank you, Mary, for this fascinating post. I do like Penny's take on touring with the coffin! And Linda, I will think of your story every time I mop up one of my daughter's nosebleeds now...

I loved Newes of the Dead when I read it ages ago, while writing about Anne Green in The Story of Medicine. And I love that story about the sailor, too. I wonder if I should take a coffin on tour for the vampires? There are some early English tales of revenants who were seen crossing the fields carrying their coffins on their backs. Or perhaps they were authors. It's clearly a must-have accessory!

Read this last year and it instantly became one of my all-time favourites! Love the style, and especially the voice of Anne. My first Mary Hooper book but by no means the last :D
Thanks for this post, great to have the story of the real Anne as well.
Fab blog, by the way.

All the ingredients of a rattling good story. Must buy a copy! I have a file folder with snippets about real people I'd love to write about. Sometimes I find them in obituaries, at other times, through research or travel. So many stories to tell - too bad it takes so long to craft a great read and get it published.

I loved Newes too when I read it and it's very interesting to read about Anne Green again here. I don't think one should do book tours with coffins unless the coffins are made of cardboard for easy transportation!

Ah, so that's where Iain Pears got some of his material for An Instance of the Finger Post! What an amazing story.

Yes, I was reliving the Fingerpost too, reading this story. But he changed her name, didn't he?

Fingerpost: yes, I'm sure this is Anne, although he changed her name and year and came at the situation in a different way. Thank you for all your interesting and appreciative comments!

Newes from the Dead is a marvellous book, and it does make one feel so outraged on behalf of the poor girl - especially sicne there was no real evidence against her. I'm so glad she survived hanging.
One could also travel with a wicker coffin, I guess, and keep one's belongings inside it. I think the ideal kind of coffin to travel with would be one like the Luggage in Terry Pratchett, with its own equipage of little legs to carry it. I guess Anne had a horse to drag hers about.