Today I do the last of my walking tours for the British Library's Georgians Revealed exhibition, which examines eighteenth century print culture, from high life to low life. It contains so many things that are rarely brought together, such as pattern books for interior design, sales material, maps and even trade cards and racecards. With the rise of literacy (in reading, if not always in writing), printed paper came to play a far larger part in ordinary life throughout the century with everything from newspapers to sheet music being available even to the very poor for the first time. This exhibition shows what a tremendous variety of this material still remains with us, despite its ephemeral quality. It runs for another week and will close on the 11th of March. So go now while you still can! 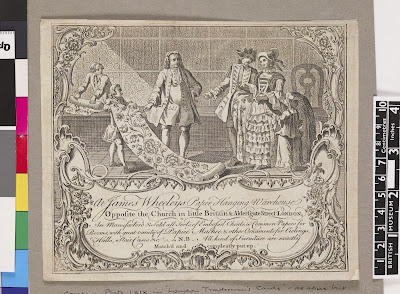 Part of the exhibition’s remit was to bring in the wider landscape of Bloomsbury and a surprising amount of Georgian architecture remains, despite the devastations of nineteenth century poverty and the air raids of 1941. The walks today feature a mile tour, starting at the Library and passing through Georgian Bloomsbury, taking in Judd Street, The Boot pub on Cromer Street, where the Gordon Rioters met in 1780, through to Regent Square, so badly damaged during the Blitz. Regent Square retains only one side of its Georgian buildings; the other three sides were lost during the Blitz. It does however, have one of London’s best ghost signs on one outside terrace wall: Bates’ Cures for Wounds and Sores. After Regent Square we move onto the Foundling Museum, to discuss the work of Thomas Coram and the original governors and the process of being admitted as a foundling, plus the terrible social conditions of the period which sparked the need for such an institution. Gin, prostitution and identity all feature. In Hunter Street, we discuss to the work of the Hunter brothers, John and William, and how they contributed so much to Georgian medicine and to the modern science of obstetrics. In Handel Street we discuss the musician and his move from a German composer of Italianate opera to the master of English choral music, plus his work for charity on the side. Then it’s up to Cartwright Gardens for the work of James Burton the architect, taking in Burton Street; to Woburn Walk, London’s finest outdoor Georgian shopping ‘mall’. Finally, it’s back to the Library via Flaxman Terrace, named for John Flaxman, artist and sculpture (possibly the finest designer of the period - for my money at least). Back in the eighteenth century garden of the British Library, built for the exhibition, we discuss London’s growth, gardens, and of course, the Georges. These walks are huge fun and have been well-received, so much so that they were all sold out in November. However, should you wish to take part in this walk in your own time (it’s about a mile and takes around an hour) please email me here for a PDF version of it. (My address will be displayed in the browser bar and can be copied from there.) 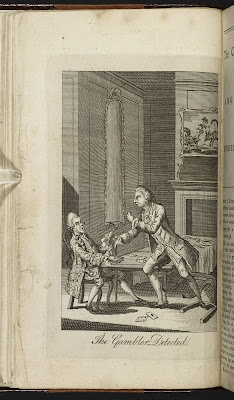 If you have a whole morning or afternoon to take in the delights of Georgian London, the British Library have also had me create a walk which includes the Foundling Museum, Coram’s Fields, The Hunterian, Lincoln’s Inn Fields, the Soane Museum and Woburn Walk, and takes you along many of the remaining Georgian Streets of Bloomsbury. This walk is free to download from the British Library here and the walking itself takes a couple of hours, so add that on to the amount of time you want to spend at the museums. Free, paper copies of this walk are also available inside the Library until the end of the exhibition. If you're on social media and doing the walks, the hashtag for the exhibition is #BLGeorgians. Enjoy!

Lucy, I was feeling so sad that I couldn't be at this walk, being some hundred and more miles north from London - but then you added in the availability of the walking maps. What a delight! Thank you! Back to do some downloading.