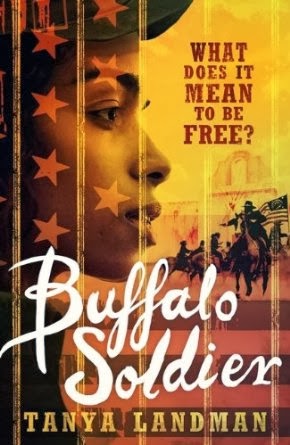 Tanya Landman's brand new novel is a tour de force. The voice of Charley - born Charlotte - does not waver, and the story of a girl from slave to freedom via the American Civil War and service in one of the black regiments of of the American Army as a 'Buffalo Solider' in the 19th century Indian Wars, pulls no punches.

The story of the Buffalo soldiers, African Americans who fought in segregated regiments of the American army in the 19th century is one I first heard about courtesy of Bob Marley.  I am not sure how well known this story is in the UK. For many of us the American West is a white country and it's important that Tanya Landman has shone a light on other histories. Landman  knows her stuff, Apache, her earlier Carnegie shortlisted  novel was also set in the mid century West  and covers similar territory.

It also features a rather wonderful walk on by Bill Cody, who I have to admit is one of my favourite characters. The stories of the cottage hospital at Llandudno full to the brim with Indian braves from his Wild West show, laid low with Welsh flu contracted on the long ride from Dolgellau to Portmadoc has always been one of my favourites.

Even though this is not really a slave narrative - the concerns at the heart of the book, for me were more to do with the mistreatment of the American Indians, and Charley's eventual realisation that she had been lied to again by her white masters, the people she was fighting and killing and policing were no monsters. That she was on the wrong side. That even when there was some kindness shown by those in power, there was always a cost and it was always involved compromise.

There's an awful lot of death and destruction and pain in this book. Rape and lynching and senseless violence in every form. It is in no way an easy read, and although there are moments of snatched love and humour and comradeship, Charley rides and shoots her way through life with tightly gritted teeth, and as everyone she  loves is killed. Charley manages to survive, and thankfully find her own freedom, even as she is painted out of her country's  history.

There's loads that drew me to this book, I've always had an itch for American 19th century history and Bury My Heart At Wounded Knee is one of my top non fiction reads (I can't say favourite, it is too sad).  America's history of taking care of it's indigenous peoples is no better or worse than that other ex British colony, Australia, where the local people were hunted down for sport. And there are parallels between the way both the Native Americans - Indians in Landman's book - and the black population are lied to, betrayed and ultimately dispatched in a variety of cruel and unusual ways.

Charley does, thank heavens find some peace by the end of the book. I do think it might well have been unbearable without it. If this book doesn't find itself on the awards lists next year my hat (and I would like it to be one of those Vivienne Westwood monster western hats as worn by Pharell) will be eaten.

On more thing. Another reason I wanted to read this book was that Charley is based on a real African American woman; Catherine Williams who enlisted and served as a man, William Cather.  And this resonates rather well with my own story in Daughters of Time, set during the Crimea and featuring Mary Seacole and her British Hotel.

Buffalo Soldier is out on April 3rd

Thank you for alerting me that "Buffalo Soldier" is out. Must get my copy.

Tanya is a rare and remarkable writer who deals with interesting subjects and definitely a writer for the Carnegie. (IMO, and others, no doubt.)