At a recent book festival, a panel of illustrious 'literary' writers won their spurs as diplomats. The event was being filmed, and the camera swung round to reveal a beaming young woman, barely more than a child, her arm thrust into the air, desperate to ask a question.

An adult alongside, presumably her parent, was even more aglow with pride. And the question was?
You’ve guessed it:
“I am an aspiring writer (pause for exchange of smug smiles with parent). Where do you get your ideas from?”
Of course, the only honest answer would be: “Listen, honey, if you have to ask that, there’s not much chance that you’re suited to this writing game.” But I’m glad to say that none of the literary titans on the stage yielded to the temptation to deflate a youthful ego in public. No one said, “Did your Mummy tell you to ask that?” Nor did anyone challenge the girl about whether she wanted 'to be A Writer’ or to write - the former being a far more common ambition these days.
One or two of the panel blethered on as best they could to fill the time until it was decent to call on another questioner. But there was no mistaking the looks of bored exasperation that passed between the others as they dodged the ball.

I couldn’t help wondering whether there is a literary equivalent of the song “Don’t Put Your Daughter On The Stage, Mrs Worthington.” Do let me know.

Just for fun, here are some suggestions for how Miss Worthington might find ideas for her first novel - to show her how they can come from anywhere, and why you don’t need to agonise about seeking them out [as any normal child would say: 'well, derrr’].
Indeed they can come from the least promising places, as I found when I went to take photos to illustrate a post I wrote here a couple of months ago.
I came across this ugly memorial, oddly positioned on what used to be part of the Napier University campus and is soon to become an over-developed modern dormitory for the very rich. 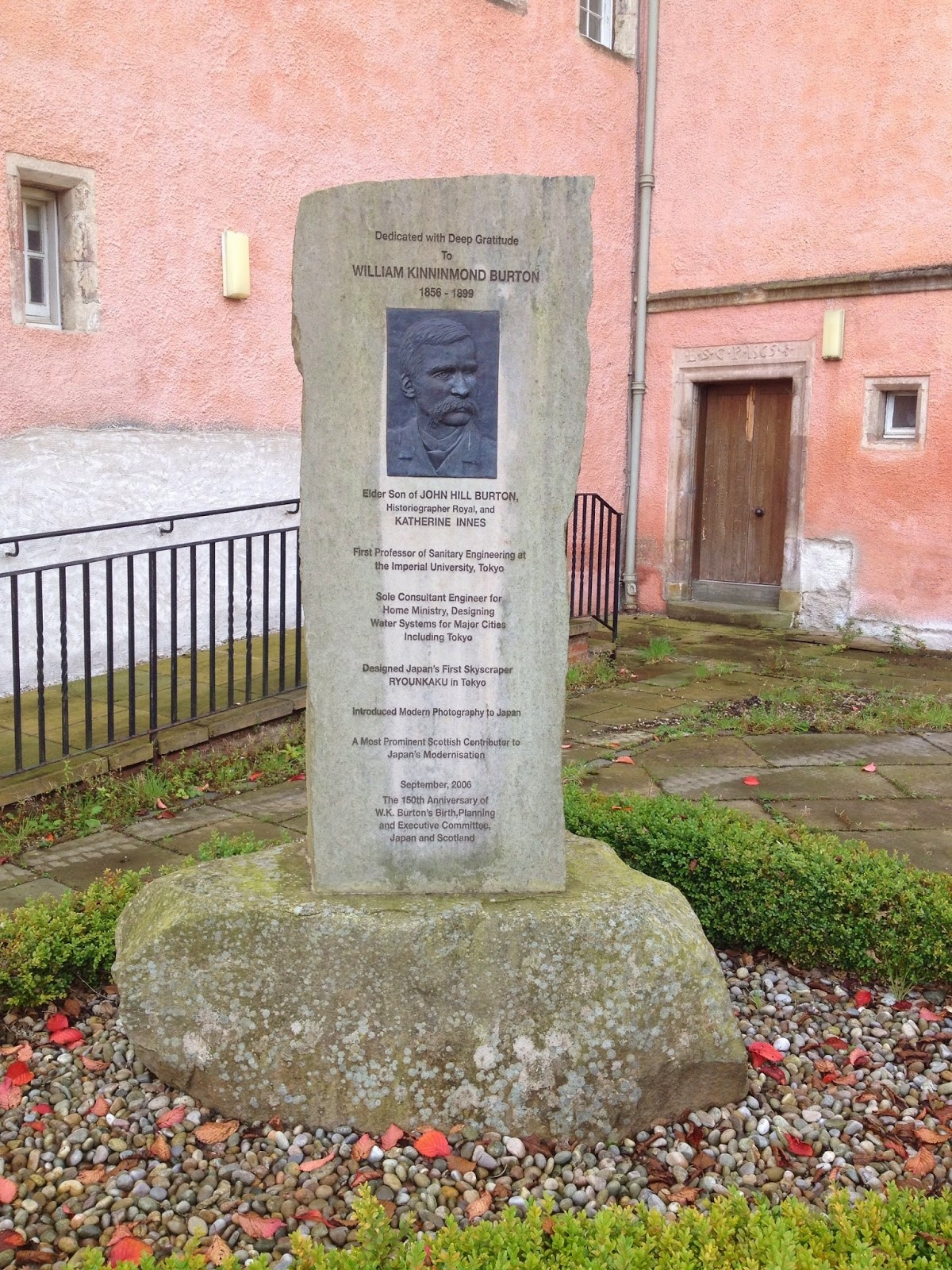 It’s not a great work of art, I think you’ll agree, and the wording shows every sign of having been agreed by a committee. But what a plethora of novels might come out of it. Let’s work our way down from top to bottom. 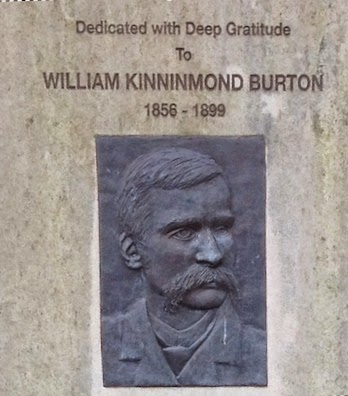 The bare facts of WK Burton’s life give you a timeframe, and plenty to look up on the Internet. Why is this memorial 'Dedicated with Deep Gratitude’? Even if you don’t stick to the actual facts of WK’s career, that's a good start to the search for a story, if ever I saw one.

You might want to build your plot around how and why, despite his obvious personal accomplishments, a man might still be seen - long after his and his parents’ deaths - primarily as their son. What scope that provides for creating a character who feels he can never live up to the triumphs of his family, or perhaps was motivated to do great things himself to fulfil his parents' aspirations for him. WK's own history might suggest that he deliberately carved out a life independently, playing to his personal enthusiasms and strengths in defiance of their hopes and expectations (indeed you might want to reflect on that from your own perspective, as you get older, Miss Worthington).

If you look into the actual details of his parents’ lives you will open up myriad possibilities for characters and settings. Following his father’s career as a biographer will take you into the world of the 18th century and the Scottish Enlightenment, opening up the life and works of the great philosopher, David Hume.

But why is WK's mother also named on the obelisk? Look her up and you’ll find that she grew up in high-flown legal circles, studied sculpture, promoted the education of women, and went as a nurse to the Crimea. She and her husband were friends of Conan Doyle. If you can’t find ideas there, Miss Worthington, you really should give up. And that’s before you find out that WK’s sister was a well-known artist, studying and exhibiting all over Europe.

We move down the memorial, and suddenly we're in Japan and down the sewers. 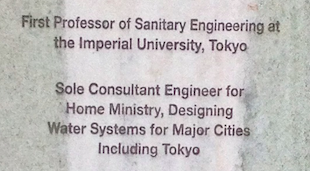 It’s not just because the sewers of London feature so heavily in my Montmorency books that I see massive potential here.

Then look at this. The memorial really is the gift that keeps on giving.

That skyscraper - all 225 feet of it, was home to shops, an art gallery and a concert hall. What a wonderful setting for a novel. Add to that the closure of it’s revolutionary elevators ‘for safety reasons’ and the damage done to it in the great earthquake of 1894, and it would be amazing if you were still scrabbling around for plot ideas.

Some of his most famous pictures date from the 1891 earthquake. Here’s just one. 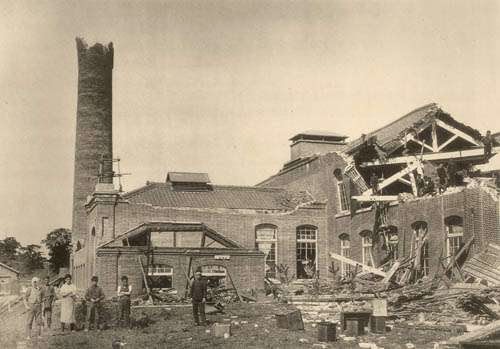 If you can’t build a story around that, Miss Worthington, you are in real trouble.

There are plenty of Japanese websites that can help you out here - each of them laced with small details that might spark off a completely unrelated tale.

Even this dull inscription at the very bottom of the stone could inspire you to write something lively. The clumsy reference to the committee might set your mind racing.  How about starting a story with the meeting of a memorial committee - even using the structure of the arguments at their meetings to shape whatever you choose to write? It looks as if hours were spent coming up with the leaden wording on the memorial - and yet apparently no one foresaw that rainwater running down the metal portrait would discolour the stone below. Ha ha.

Beyond all that, you could look ahead. The land around this memorial is soon to be a building site. The obelisk might be moved, accidentally or deliberately lost, or be scraped daily by the Chelsea tractors of the new residents, taking little darlings like you off to school. It could become the focal point of a story set in a world far removed from engineering, photography, Edinburgh, Japan, or anything to do with WK Burton and this particular lump of stone.

All I have been doing, Miss Worthington, is showing how anything, be it a memorial, a shop sign, a scribbled note, a soft toy, a photograph or a fish pie might set your novelistic juices running. An idea is only a starting point. Writing fiction is about letting your imagination run. Some of us enjoy rooting our books in fact, and restricting our flights of fancy to things that could plausibly have happened in a particular era or society, but you don't have to do that.
I could have said much, much more. I might have told you what I would write about having seen this apparently dreary monument —but, Dear Miss Worthington, you are going to have to wait to read that in print.  And you might be waiting a very long time, because I have plenty of other ideas.

www.eleanorupdale.com
Posted by Eleanor at 05:00

An 'ugly' memorial is better than no memorial at all, otherwise all these people & their achievements would have probably been missed by all of us today.

Wonderful to see the writerly mind in action over each tasty morsel of that memorial ... and also very funny to read about that all too recognisable eager girl with the dreadful mother! thank you.

What a super post! What I find fascinating is that every writer would see that memorial (or indeed anything) and write something entirely individual! Ace! Signed, Adele because am only allowed to comment as ANON.

Google seems to have relented ....can post comments again

What a fascinating look around a memorial (and the mind of a writer!) I love looking at old memorials and have my own example to share (no photos, sorry.) One lunchtime at work I wandered around the 'new' graveyard next door (new = 1870s to present; the old one has burials from the 17th century). I'd been around the old graveyard hundreds of times, but never really looked in the more modern one.

Straight away, a plaque on the wall caught my eye because it said it was a husband and wife who were buried there. Who had died on the same day. On Christmas Eve, 1954, to be exact, at Prestwick Airport.

A bit of internet searching back in the office led to a tale of Christmas tragedy involving the deaths of 28 people after a crash on what should have been a routine flight from London to New York, with missing uncut diamonds, and painstaking detective work to recover (most of) them from the mud of the winter soil - some of those uncut diamonds are still under the new runway today.

Truth made you a traitor as it often does in a time of scoundrels. See the link below for more info.