Thou Shalt Not Ride Sunwise About Tara - by Katherine Langrish 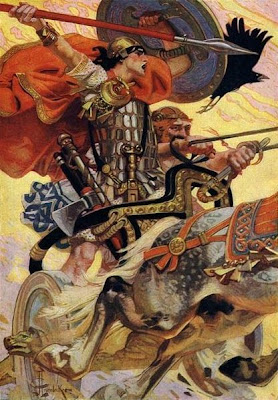 ‘Geasa’ – the magical prohibitions or tabus laid upon Irish heroes such as Cú Chulainn – must have been very difficult and frustrating to endure, especially since it seems to have been the fate of most heroes eventually to violate them. (Difficult to pronounce as well, for the non-Irish among us. I'm indebted to a recent Facebook discussion in which an expert offered an approximate pronunciation for geas as 'gash'.)

Maybe geasa were just a poetical, literary device, the equivalent of the prophecies about Greek heroes like Achilles and Oedipus, where the narrative imperative says that Achilles’ heel will be his undoing; that Oedipus will kill his father and marry his mother, etc. If not, though – if they ever had any real currency – you have to wonder. Could anyone use them? If so, how often? How carelessly?  Could you do the equivalent of putting your children under geasa to pick up their socks and tidy their rooms?   Or would that kind of thing backfire just as badly as most of them seem to have done in the tales?  Geasa seem to have been impossible to refuse, however arbitrary or awkward they might be.

So what on earth were they all about?  There’s a note by PW Joyce at the back of his translation of 'Old Celtic Romances’ in which he comments,


Geasa means solemn vows, conjurations, injunctions, prohibitions.  It would appear that individuals were often under geasa or solemn vows to observe, or to refrain from, certain lines of conduct – the vows being either taken on themselves voluntarily, or imposed on them, with their consent, by others.  It would appear, also, that if one person went through the form of putting another under geasa to grant any reasonable request, the abjured person could not refuse without loss of honour and reputation.
Interesting as these comments are, they don’t seem quite to cover the range and quality of all geasa.  Was it a ‘reasonable request’ when Gráinne asked one of Finn’s faithful warriors to marry her under Finn’s nose at a wedding feast that had been arranged partly to settle an old enmity between Finn and her father?  It’s true that Diarmuid doesn’t have to agree, but the unanimous decision of all is that though Diarmuid may decline Gráinne’s geasa, he will lose all honour if he does.
Thus there seem to me to be different types of geasa.  Gráinne’s geas on Diarmuid is an almost insuperable injunction to do something he would never otherwise have dreamed of doing, and it involves him in loss of honour no matter what action he takes. The fact that he chooses to obey the geasa rather than keep faith with his lord shows how incredibly powerful the injunction was considered to be.  (So: not at all something you’d use to get the children to tidy up their rooms! Not something you’d use lightly!)  Gráinne had given her father her consent to be Finn’s bride, but casually, ‘without giving much thought to the matter’:
“I know not whether he is worthy to be thy son-in-law; but if he be, why should he not be a fitting husband for me?”
When she sees Finn, however, she changes her mind.  She uses the power of the geas as an extreme, last-minute measure: her only chance of escape. 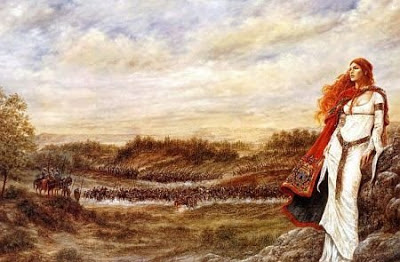 Other geasa, however, are more in the style of prophetic warnings or tabus. King Conaire is not to shoot birds, for example, because his father was a bird-man, the male equivalent of the swan-maidens of many folktales who can cast off their feathery skins and appear in human form.  This is a straightforward tabu: you don’t kill the animal which is your totem, to which you are ‘related’ by spiritual bonds and by blood.
But the complicated geasa about not going righthanded (sunwise) about Tara or lefthanded (widdershins) about Bregia, or following three Reds to the House of Red, or sleeping in a house from which firelight can be seen at night, these are prophetic warnings.  They are not, perhaps, quite as inescapable as the prophecies of Greek myths.  When the oracle at Delphi tells Oedipus he will slay his father and marry his mother, you know it’s a done deal. No matter what Oedipus does, no matter how hard he tries, this is what will happen.  The event is foretold.  In the case of the Irish King Conaire, however, the geasa merely indicate unlucky actions which ought to be avoided; and although the assumption is that some kind of bad luck will follow, they don’t spell out exactly what the consequences will be.  Also, the prohibitions laid down by the geasa seem arbitrary: they are in themselves innocuous actions.  We would all want to avoid killing our fathers and marrying our mothers.  But most of us could ride clockwise around Tara, or sleep in a house with firelit windows, without coming to harm.
The geasa piled upon Conaire spell out a sequence of actions and omens which will lead to his death; but he cannot know this in advance. For the reader, or for the audience hearing Conaire’s tale told or sung aloud,  the geasa are a highly effective literary, poetic device for building up tension and the sense of approaching doom.  And in the same way, the two geasa laid upon Cú Chulain – not to eat the flesh of a dog, and never to refuse an offer of food from a woman – having lain dormant for much of the tale, snap together like the  jaws of a trap as the old hags call him to turn aside from his journey towards the army of Maeve to taste the meat of the hound they are cooking. It’s a signal that the end is coming, a sign of doom.  And Cú Chulain cannot escape it, although the tale makes it clear that he has the opportunity – he may refuse, but not without dishonour, not without falling short of his own greatness. “A great name outlasts life,” he says – like Achilles.

Cú Chulain has already seen the Washer at the Ford:
A young girl, thin and white-skinned and having yellow hair, washing and ever washing, and wringing out clothing that was all stained crimson red, and she crying and keening all the time.
“Little Hound,” said Cathbad, “do you see what it is that young girl is washing?  It is your red clothes she is washing, and crying as she washes, because she knows you are going to your death against Maeve’s great army.  And take the warning now, and turn back again.”
“I will not turn back” [says Cú Chulain] …”And what is it to me, the woman of the Sidhe to be washing red clothing for me? It is not long till there will be clothing enough, and armour and arms, lying soaked in pools of blood, by my own sword and spear.  And if you are sorry and loth to let me go into the fight, I am glad and ready enough myself to go into it, though I know as well as you yourself I must fall in it.  Do not be hindering me any more then,” he said, “for, if I stay or if I go, death will meet me all the same.”
(Trans. Lady Gregory)
I can’t confidently answer the question of whether geasa were ever truly used in real life, outside the tales and the epics, but I would hazard a guess that they were, just as we know that the oracles were regularly consulted in ancient Greece and in Rome.  I’m willing to bet that there were geasa - prohibitions, tabus - against the killing or eating of various animals associated with ancestry and with luck, like Conaire’s bird/spirit father, and Cú Chulain’s iconic struggle with the hound which gave him his name.  Once Cú Chulain had – effectively – become a hound, as he did when he offered himself to Chulain the smith in exchange for the dog he had killed, then in a sense all dogs became his kin.  Of course he could not eat them.
I’m willing also to believe there were geasa or prohibitions concerning all kinds of other omens and lucky or unlucky actions or directions, because after all they still exist today:  feng shui, not walking under ladders, not having thirteen at a dinner table.  But the geas that one person could lay upon another, to compel them to do something even against their will and honour - that's something else again, and as far as I know doesn't seem to appear in other mythologies.  Did it ever exist? Was it a metaphor for what we now call emotional blackmail?  Or was it something far more fearsome and holy, reserved perhaps for special occasions, for religio-political purposes?  Was it a remnant of Druidical power?

Statue of Cuchulainn by Oliver Sheppard in the window of the GPO, Dublin - commemorating the 1916 rising.
Source: Wikipedia, under Creative Commons License. http://en.wikipedia.org/wiki/File:Cuchulain_at_GPO.jpg#filelinks
Posted by Katherine Langrish at 05:30

I have always thought that geasa are every bit as unavoidable as those oracles in Greek mythology - just as in a folktale, when a character is warned not to do something and invariably does, unintentionally, and you just KNOW that they won't have a happy ending.

What a fantastic post, Kath! I have always felt Grainne's geas on Diarmuid was unfair. It's the same story as Tristram and Yseult of even, in my opinion, the ur-legend of Gwnwyfhar and Mordred (Madron).But this version takes all agency away from D. just as the later love potion motif does for Tristan and Isolde.

Wonderful post, Kath. It took me right back there to the middle counties of my childhood (County Laois) and the wonderful tales around the fire. I LOVE the painting of Grainne, the russet-haired beauty in white.