The Mother of us all: Five Children on the Western Front by Kate Saunders

Fresh from her short-listing for the Children's section of the Costa Award, our special guest for November is Kate Saunders.

Kate Saunders is a full-time author and journalist and has written numerous books for adults and children. Her books for children have won awards and received rave reviews, and include future classics such as Beswitched and The Whizz Pop Chocolate Shop. Her adult books include The Crooked Castle and The Marrying Game. Kate lives in London.


In this month of Remembrance in the Centenary of the outbreak of World War One, it seems especially appropriate to feature a book that begins in 1914 and takes some well-loved characters into danger in France. E. Nesbit's Five Children and It has become a classic for children; it was published in 1902 and it's not a great stretch of the imagination to see that the older children in the story would have been caught up in the "Great" War.

Cyril (Squirrel) is off to the Front, soon to be followed by Robert (Bobs). Anthea (Panther) becomes a VAD, while Jane (Pussy), much to her mother's horror,  wants to train as a doctor. The Lamb (never known as Hilary, except to his mother) is a schoolboy and the five "children" have been joined by a sixth, Edie.

There are familiar characters like the Professor and Old Nurse and new ones like Ernie, Lilian and the Lamb's best friend at school, Arthur Winterbottom, known universally as Winterbum, And of course the grumpy wish-granting sand fairy, the Psammead.

I started by asking Kate if the Nesbit books had always been a favourite with her.

Kate Saunders: 'Five Children and It' was a great favourite when I was a child. I also loved the two sequels - especially 'The Phoenix and the Carpet' because we lived near Kentish Town Road, where the carpet was purchased.

Mary Hoffman: At the end of Five Children and It, the children agree that Psammead will not give them any more wishes. Did this give you a massive problem? (As it must have done for Nesbit with the two sequels)

KS: The wishes were supposed to stop at the end of 'Five Children', but Nesbit decided to overlook this and so did I; the sand fairy is known to be capricious.
MH:  When I re-read the books to my own children, I was made a bit uncomfortable by the attitude towards servants and in the first book the portrayal of Gypsies and “Red Indians.” I did bowdlerise a bit when reading out loud. Any thoughts on that?


One thing I definitely did not want in my book was the children's snobbish  asides about servants and the servant class in general. In these moments we hear Nesbit herself and not her characters. She does it in 'The Treasure Seekers' too, when she puts a remark about the servant not brushing the stairs into the unlikely mouth of Oswald Bastable. It's looks like a pretty poor show for a devoted socialist like Nesbit - until you consider the intense social anxiety of the time. Nesbit's rootless, wandering childhood left her with a fear of losing caste that it is difficult to understand today; she once rejected an illustration with the complaint that the children didn't look "like the children of gentlefolk".
MH:  You manage to maintain E. Nesbit’s tone in the dialogue among the children very well, with all the slang of the time. Did that come easily?


KS: I did not consciously imitate E Nesbit's 'tone' - I only have one tone, and couldn't change it if I tried. But many writers for children imitate her unconsciously. She is the mother of us all.
MH: Was it you who changed the Psammead into a desert god or was that Nesbit in the two sequels?

KS:The original Psammead was not a desert god; I invented his background for the purposes of the story. But Nesbit left his background beautifully vague.
MH: Setting your book in this centenary year of the outbreak of WW1, were you conscious of introducing the subject to young readers?

KS: I was highly aware of introducing young readers to the First World War, and giving them the broadest possible picture; thanks to the Psammead, I could take the children right to the front line, besides showing how lives were affected at home.

MH: You give Amanda Craig an acknowledgment for “saving someone’s life.” No spoilers but I think I can guess who that was. Were you going to be more ruthless initially?


KS:My own darling son died in 2012, and my grief definitely shaped this book. The writing of it probably held me together.
MH: You have very thoroughly made it impossible for there to be a further book about the Psammead, at least not by you. What is your next project likely to be?

KS: I have no idea what my next children's book will be - I'm deep in a story for adults at the moment.
MH: Did you go and see the poppies installation at the Tower?

KS:  I missed seeing the poppies in the flesh, but loved the pictures - a beautiful work of art and the strongest possible statement of remembrance.

Thank you, Kate, for  generously giving us your time in this busy month and good luck for the Costa! 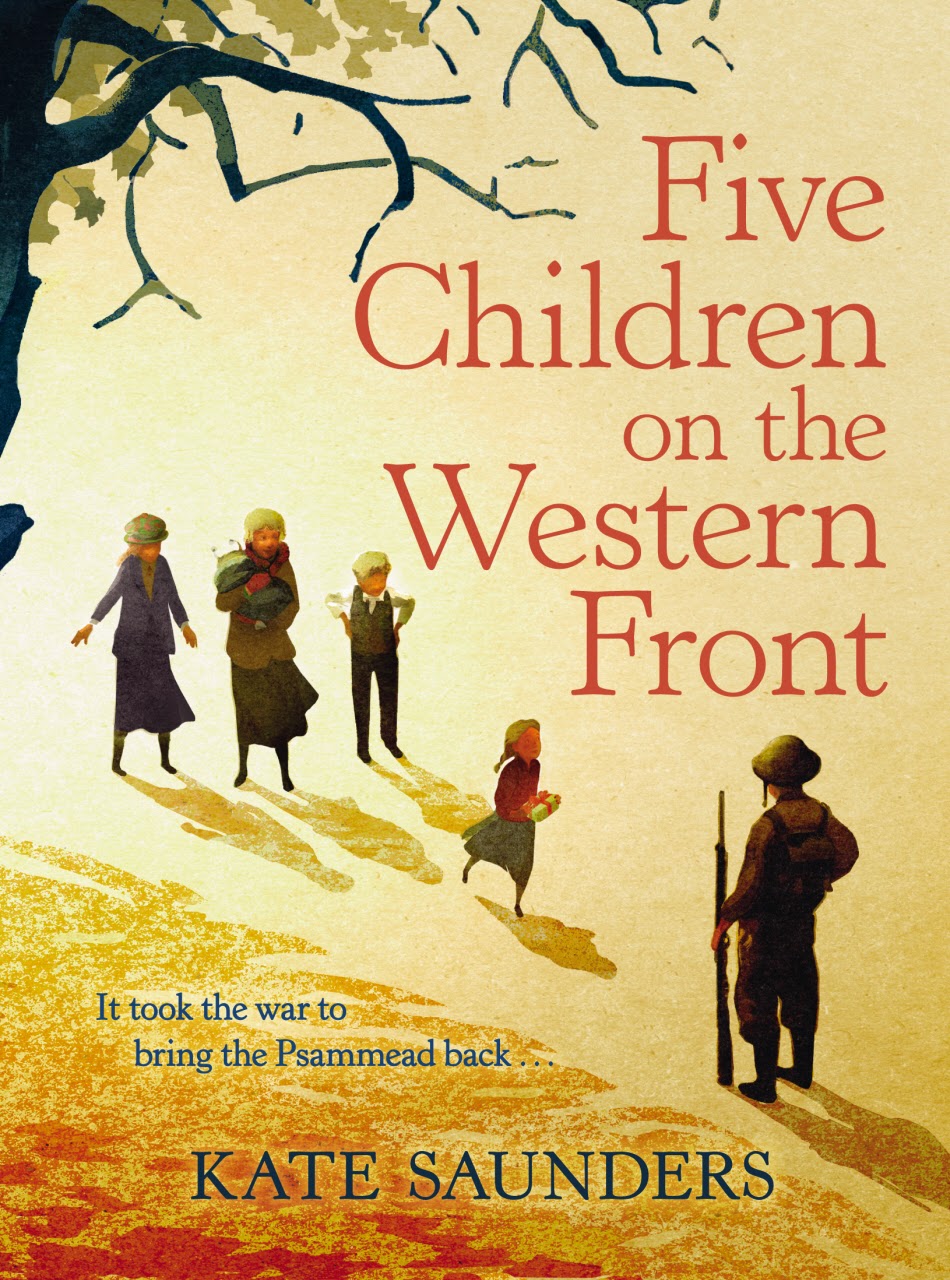 You can read my review of Five Children on the Western Front here.

This sounds wonderful - I'm a great admirer of Kate's writing for adults, and look forward to reading this. 'Five Children and It' (and its sequels) was a book I loved - as did my own children. Like all great works of literature, it's well able to stand being reinvented for a new generation... and I feel sure Kate's version will add resonance for a twenty-first century readership.

I'm looking forward to reading this book very much, Kate. Taking those well-drawn Edwardian children forward into the history of their generation is such a powerful and poignant idea.

(By the by, I have just read The Treasure Seekers and, though the book and children have all the baggage of that time, I did laugh aloud at Oswald's moments of jealousy and pretension.)

Those who I know who have read it say it is wonderful. Good luck with the Costa. I look forward to reading it.