Place and the Novel by Antonia Senior + February Competition

Our February guest is Antonia Senior - welcome! It's not often that February has 29 days and hence a guest slot on The History Girls. There's a competition too, so please scroll down when you have read Antonia's post.

Antonia Senior is a writer and journalist. After studying History at university, she worked at The Times for fourteen years in a variety of roles, including acting Business Editor and Leader Writer. She became a freelance after the birth of child number 2, to concentrate on writing and reviewing books. Antonia writes the monthly round-up of the best new historical fiction in The Times’ Saturday books section. She is a judge for this year’s Historical Writers’ Association debut fiction crown. The Winter isles, the story of Somerled, the first Lord of the Isles, is out in paperback in April.

How the landscape of Scotland inspired and shaped my book: The Winter Isles.


No one thought I should write The Winter Isles. Its hero is a twelfth century Scottish warlord - a man more mythical than historical. A warrior in a brutal age. Me? I’m a middle-aged Mum who lives in London, and cries when my eyebrows are plucked. My agent was kind but wary, my publisher was tremulous. I was furious at my own obstinate insistence that this was the story that I wanted to tell.

The compulsion to write about Somerled was rooted in one thing: my absolute love of the place in which he lived. The wild West coast of Scotland is my favourite spot in the world. From beautiful Barra, with its machair-backed beaches and music-filled pubs, to the empty, purple hills of Ardnamurchan – this is the land that makes my urban soul howl to the moon with joy and hope. And I wanted to write about it.

I learned about Somerled, the first Lord of the Isles, at Finlaggan on Islay. This is the inland home of the later Lords, an eerie, rush-filled loch hemmed in by heather and grey skies. Somerled’s descendants – the Donalds from whom all the MacDonalds and others are descended – were based here. 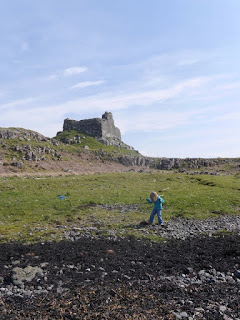 There are places where you history breathes on your neck, whispers in your ear. That moment when the curtain shivers, and you can hear the clamour of voices, the stories that demand to be told and retold. I have felt that shiver in grand places: Hagia Sofia in Istanbul or the Pantheon in Rome. I have felt it in humble places: the ruined village of Mingulay, the grey mud left behind by the Thames at low-tide, where the hangman’s noose falls from the Prospect of Whitby sign in Wapping. There I was, at Finlaggan, amid the old stones and the drizzle, with an insistent voice in my head. I am the Lord of the Isles. Write my story.

So I did. I went looking for Somerled in the records - where he appears fleetingly and rarely as a sometime friend of, and sometime rebel against, the Canmore Kings of medieval Alba. I looked for him in the myths, where he is a pure Gaelic hero who fought off the rapacious Vikings. I looked for him in the DNA studies – which show him spreading his tangled Norse-Gaelic genes with near Genghis Khan levels of enthusiasm.

But there was not much to go on. His was not a culture of the written word. It was a culture of swords and sung poetry. As a historical fiction writer, I take the factual research incredibly seriously. My books on the English Civil War have been written on the shoulders of giant historians and mounds of primary material. The Somerled shelf on my bookcase – although as complete as I could make it – is slightly stocked.

The Winter Isles, therefore, called for much historical imagination – all rooted in a sense of place. How would this landscape shape the men? What burden would the women bear? How would they cope with the cold, the relentless wind, the winter storms? What would it feel like, to lie in the damp, dark heather, watching the light spill from your enemy’s hall – to be the eyes watching in the darkness? To be the watched?

Clues came from unlikely places. My husband and I were climbing a munro in winter with a lovely guide. His friend had experimented with hillwalking in thick, traditional tweed. It kept out the weather as well as modern gortex, said our guide, but once inside and by a fire, it steamed dry in great white clouds. The best historical fiction is filled with texture, with details like this one.

There were big problems with the knowledge gap. No one knows where Somerled’s main stronghold was. He must have had one. Local legend in Morvern places him at Ardtornish, near Lochaline – a nub of land which juts out into the Sound of Mull. The name means Thor’s Headland in Norse. There is an atmospheric ruined castle at Ardtornish – but its dates are out. There is no archaeological evidence that sites our twelfth century hero here.

Still, one morning, when staying alongside the incomparably beautiful Loch Aline, we walked out to Ardtornish Castle. It was a day of cool blue skies and violent winds. The waves whipped up the Sound of Mull, white-tipped. Across the water, Mull’s Ben More was snow speckled and unforgiving. From the water’s edge in front of the Castle, we could see all along the Sound in both directions. It was empty, but for the skirl of sea-birds. In the times of Gaelic dominion, these were busy seas – full of traders and merchants and travellers. 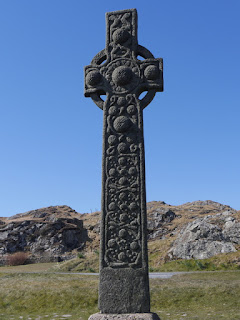 It seemed to me, standing on the edge of Somerled’s Morvern, that there was only one place he could have lived. Here. Scoured raw by the wind, and a rain that comes in sideways. But visible and dominant, and proud. Fact? No. But all historical fiction is a tangle of knowns and unknowns – and where there are known unknowns we must do our best to imagine fiercely and in good faith. We must rely on a sort of historical instinct.

So I wrote the book that no-one – least of all me - wanted me to write. It was inspired by the land, and rooted in it. And, readers, it has been greeted with a gratifying enthusiasm. Sometimes, perhaps, you have to write with your heart, as well as your head. 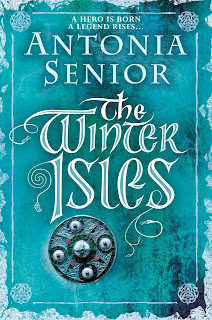 To win one of five copies of Antonia's fabulous-sounding book, just answer the question below in the Comments to this post:

"Which historical fiction book do you think most successfully evokes place, as well as time?"

Then send a copy of your answer to Mary Hoffman at maryhoffman@maryhoffman.co.uk

This book sounds fascinating - had never heard of Somerled.

Perhaps it's because it's set in a similar area, but the book that comes to mind which evokes a very strong sense of place is Joan Lennon's Silverskin, set on Skara Brae. You can almost smell the peat fires, and feel the salty wind on your skin.

Thanks for sharing this, Antonia. I love the detail of the white clouds of steam rising from damp tweed!

I adore the west coast of Scotland and having sailed many times from largs up and across the top I can't say which bit I like the best, but from my sailing interests my most atmospheric historical novel must be Erskine Childer's Riddle of the Sands, set in the pre first world war years, with the boat going between Holland and the UK with a mix of sailing detail and trying to live in a space most folk would have trouble fitting a sofa in, and the build up to war, with spying and escapades through mist and the tides, changing the face and rules with each change of water level.
I can still feel the slop of the boat and the creak of the ropes as they sit in the mist making all the world a damp hidden place.

For a real sense of place I would suggest 'The Silver Pigs' by Lindsey Davis, though to be honest, the same could be said of any of her Falco books. As you turn the pages you can't fail to imagine yourself in Rome in 70CE, with its buildings and crowded streets, its food-shops and monuments. Then, later, we reluctantly sail to chilly Britain where, as Falco says, there's that 'fine mist that tangles sticky as fish glue in your hair'. Looking out of my window now, it's a perfect description!

Thank you for this. Sometimes the books that we have to stand up for are dearest to our hearts, aren't they?