ROM, I Think I Love You by Joan Lennon

From time to time on The History Girls, people share museums and exhibitions that they've visited that they think you might not have come across or that they just plain loved.*  And for me, the Royal Ontario Museum in Toronto ticks those boxes.  It was opened in 1914, a "graceful structure of buff-coloured brick and terracotta"** and then, in 2007, the stunning Michael Lee-Chin Crystal was added.  I ABSOLUTELY LOVE IT!!!  (Just saying.) 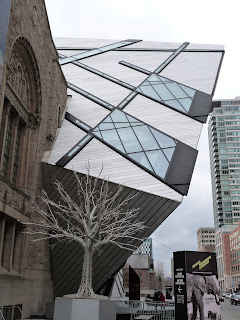 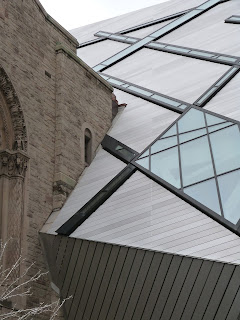 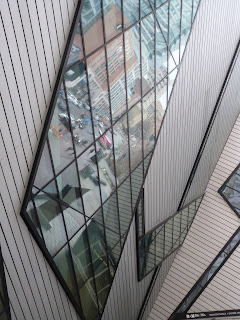 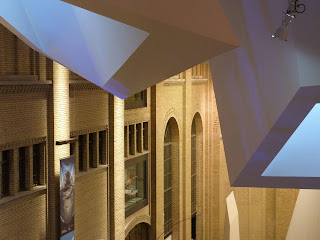 The place holds exhibits from dinosaurs to modern art and pretty much everything in-between, but I want to talk about just one cabinet that I saw when I visited recently - the one in the Ancient Egypt section titled Apprentice Work.  I don't think I've ever seen Egyptian apprentice pieces before.  It was fascinating - 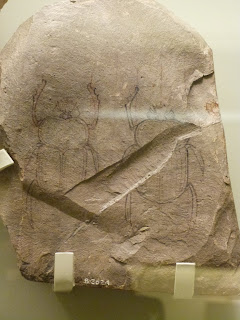 the just-blocked-out stage of a figure 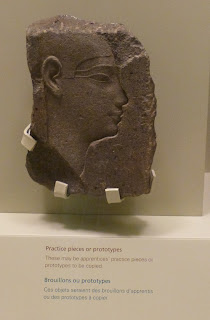 And then, at the other end of the game, a poem by the artist Irty-sen (Middle Kingdom, reign of Mentuhotep  II, c. 2040 BC) who writes -

I am a craftsman who excels in his art
I know the walk of the male figure, and the pace of the female figure,
the positions of an instant,
the bending of the body of him who strikes the captive,
how one eye looks at another,
how to make the faces of prisoners look frightened,
how to poise the arm of him who harpoons a hippopotamus,
and the stride of the runner.
I know how to make pigments,
substances which will adhere, without allowing the fire to consume them
and which cannot be washed away in water ...

I love his confidence - and his un-anonymity - and I believe every word he says.

So if you can, go to the Royal Ontario Museum - you will not be disappointed.


* For example, try Katherine Langrish's piece yesterday about the Musee de Montmartre in Paris or Mary Hoffman's post on the Celtic Exhibition at the British Museum.  Next best thing to going to them yourself!

That was fun, Joan! I love mixed museums. It means that you can justifiably huddle in just one corner of interest. That poem is great. What would a history girl put in her equivalent? We all have to know how to poise the arm of him who harpoons a hippo, in one way or another, depending on our period.

That looks like a beautiful building, and a great museum. Thank you for sharing.

Just read your post. Love the tomb writing by the ancient artist...sigh. Thank you.