Review of The Mystery of the Clockwork Sparrow

The Clockwork Sparrow is a lively adventure for 9-12 year old readers, by Katherine Woodfine, set in Edwardian London, in a world that was rapidly changing. There are omnibuses, an American tycoon is opening a department store and threats of war are rumbling in the distance. 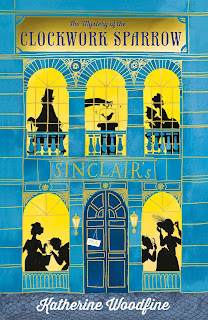 I'm probably late to this one as there is a sequel out on February 25th, but I read it over Christmas and enjoyed it. I loved the portrayal of a city in the process of such huge change, including the widening opportunities for young women.

The main character Sophie, an orphan, gets a job at the new department store Sinclair's. She's really happy there preparing for the grand opening and making friends right up until there is a break in and she is blamed. Sophie loses her job, but determined to solve the mystery of who stole the clockwork sparrow, she turns detective.

As an adult reader, I was less interested in the plot than in the portrayal of the time and place, but the story moves along at a fast pace. I really enjoyed the fashion details, newspaper clips, illustrations and the feeling that this was all very real (even though the actual department store is fictional). Of course Sophie and her friends solve the mystery and save the day, but there was plenty of mystery around Sophie herself which wasn't revealed, so I'm hazarding a guess there will be more to come in the next books.
I'd really recommend this to anyone who has children to buy books for (or wants to read it themselves, of course). I hate to be superficial, but I should also mention it has a lovely cover.