Caroline K. Mackenzie tells the story of her Classics Club and how it has provided her with companionship and inspiration during lockdown. 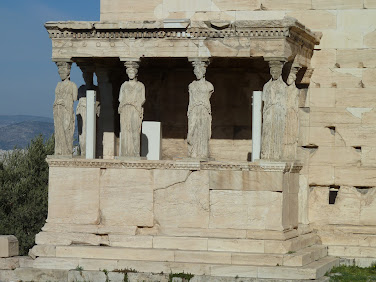 Classics Club began with an odyssey around the art and archaeology of Greece and Rome (Image: The Caryatids of the Erechtheion in Athens).
This image appeared on my flyers as a visual ‘amuse-bouche’.
© Caroline K. Mackenzie.
A couple of years ago, I decided to set up a ‘Classics Club’. I had moved to a new area and thought it would be a good way to meet new people and share my love of the ancient world. The village has a lovely Pavilion, next to the cricket pitch, and this seemed an ideal venue: not too large to be impersonal, but spacious enough to feel like a classroom. I resolved that, even if no-one turned up to Classics Club, I would still happily spend Monday mornings there with my books in the tranquil surroundings.

The first term was to be a series of lectures on Classical Art and Archaeology. I had just completed an MA on this subject, so my research was fresh in my mind and I was keen to share it. I printed some flyers and set about distributing them. Local businesses were brilliantly supportive and displayed my flyers on notice boards, included them in e-newsletters and generally spread the word. This also gave me the perfect excuse to visit every local coffee shop and pub, leaflets in hand: much coffee and cake was consumed en route, all in the name of marketing.

If you have read my previous post (A Latin Lexicon) you may already have gathered that I am rather fond of coffee and cake. So it seemed natural to include these as part of Classics Club (not least as I liked the alliteration). I hoped it would be an incentive for people to try out Classics Club and would make meeting at the Pavilion a more sociable event. 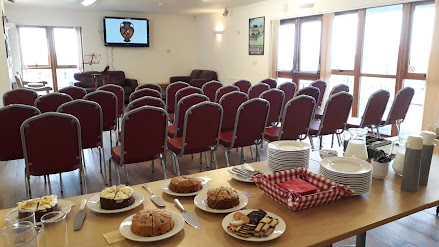 Classics Club before Covid.
Coffee and cakes were the secret to keeping the numbers up!
© Caroline K. Mackenzie.
For the second term, we planned a smaller reading class which would allow more group discussion and an in-depth look at some of the wonderful Classical literature. Homer’s ‘Iliad’ seemed the perfect place to start. However, after just a few weeks, the pandemic had taken hold and all group meetings had to be abandoned. What were we to do? Zoom came to the rescue.

We had a rather bumpy first session - I kept losing my internet connection so constantly moved around the house until I ended up sitting on the bedroom floor in half-darkness to avoid screen glare. However, everyone was very patient - the thrill of actually being able to ‘see’ each other after the abrupt confinement to our homes gave us the drive to persist. Within a few weeks we had settled into our new routine, and Homer led the way.

Coffee and cake or ‘dainties’ (to borrow a popular translation of Homer’s word for ‘nibbles’) were now ‘bring your own’. However, holding the class online meant that members from further afield could join us, even from abroad. We tackle about 300 lines of Homer a week and even at this steady pace we run out of time to discuss all that we should like to. Homer is such a rich quarry of material, with his observations on the frailty of humanity seeming as urgent and relevant as ever. Not only does Homer bring reassurance but also much needed escapism. We have had some hilarious debates about our favourite characters (mine’s Hektor: I even named my rescue cat after him) and we can’t decide whether to love or hate Achilles, with his arrogant swagger and shameful treatment of Hektor’s corpse.

The longevity and popularity of Homer’s work may largely be thanks to the skill and sensitivity with which he examines human emotions and experiences: hope, fear, love, friendship, family and, of course, death. The poet even seems to have known (or at least hoped) that his work would be immortalised when his leading lady, Helen of Troy, delivers this telling line as she bemoans her ill-fated affair with Paris, the cause of the Trojan war: ‘On us two Zeus has set a doom of misery, so that in time to come we can be themes of song for men of future generations’. That line fills me with delight every time I read it, sending a shiver down my spine: I can’t help wondering, ‘What would Homer have thought of us (three generations in one group no less) discussing his poem 2,700 years later, via Zoom?’. It’s certainly a new twist on the ‘oral tradition’. 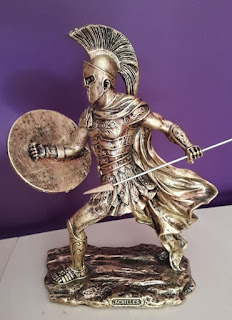 Achilles, star of the ‘Iliad’: petulant Mummy’s boy or heroic role model?
© Caroline K. Mackenzie.
Perhaps just as important as celebrating Homer’s legacy, Classics Club during Covid has provided an anchor to the week - for me, there is a comforting routine to our regular Monday morning meetings which set me up for my week of teaching (one to one Latin and Greek tutoring, much of which is based on Homer’s works and stories). The group has formed firm friendships and this last year feels almost like a rite of passage - the unique experience of having travelled together through every line of the ‘Iliad’ in such unprecedented times. Homer’s compelling narrative of tragedy, drama and, at times, comedy is beautifully framed by his famous similes depicting the power of nature. In many ways, his narrative has reflected our experiences through the pandemic - the losses we have suffered among family and friends, our finding comfort in those close to us, and our longing to be outdoors among nature for peace and reflection. One of the ‘Iliad’s’ best-known phrases ‘Before the Greeks came…’ seems ironically reflected in our own words (heard rather frequently these days) ‘Before the pandemic came…’.

One of our group was even inspired to create a Classics Club logo, pictured below. It depicts Hektor and Achilles in action, with the Trojan horse behind them, and incorporates the lovely diagonal composition that was a favoured technique of the Greek sculptors and artists. The grapes are a nod to the wine which the Homeric heroes frequently drink and offer to the gods and are also reminiscent of Homer’s epithet for the sea as ‘wine-dark’. Framing the image are the words ‘Classics Club’ in English, Greek and Latin. The Greek version means ‘Greek club’ and the word for Classics in Latin should strictly also be ‘Greek’ (Graecus) but we thought we should give the Romans their due, hence ‘Romanus’. The Greek word for club also means ‘companionship’ and the Latin one is literally ‘a circle or group for conversation’. Both these descriptions fit our group rather well. We also had a competition to compose a motto for our class to accompany the logo. The winning entry was: ‘legere, loqui, libere’, the Latin for ‘To read, to discuss, to enjoy’.

Before Covid, Classics Club had also had some fun days out together. We attended lectures at the British Museum and combined these with tours of the Greek and Roman galleries. Of course, all trips have had to be postponed for the time being but we are looking forward to some more Classical adventures in due course. 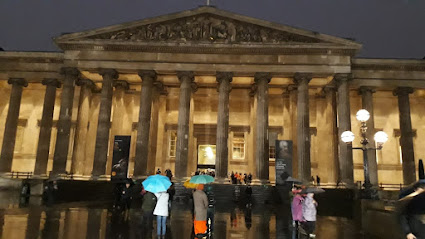 Classics Club visit to the British Museum - the rain didn’t keep us away.
© Caroline K. Mackenzie.
I have also promised the group a party. As soon as we are permitted, Classics Club will reunite in the Pavilion where I shall ensure the wine is flowing as abundantly as the Homeric hexameters.

In the meantime, we shall shortly be setting sail with Homer’s ‘Odyssey’, arguably the sequel to the ‘Iliad’, but an epic that can be enjoyed in its own right (and it is actually my favourite of the two works). In due course we shall return where we began, to the picturesque Pavilion, in the manner of ‘ring composition’ (a narrative framing device favoured by Homer whereby an episode begins and ends symmetrically). But for those Classicists further afield, I shall also be running a parallel class on Zoom.

As I type this, Classics Club ‘online’ is approaching the end of its first year, so it seems rather appropriate that we are just embarking on the concluding books of the ‘Iliad’. It has been quite an odyssey (forgive the pun). Our meeting next Monday will fall a day before our first birthday - I think I shall put a candle in my slice of cake…

The final lecture of Classics Club pre-Covid was about Lullingstone Roman Villa in Kent, the subject of my first book and also my first ever blog for the History Girls: Culture and Society at Lullingstone Roman Villa. Last week I delivered an updated lecture on the same topic hosted by my publisher, Archaeopress. So by way of offering you a slice of Classics Club (without the cake, I’m afraid) I attach a link below in case it is of interest. P.S. If you watch the talk you will find a code for a 25% discount on both my books. 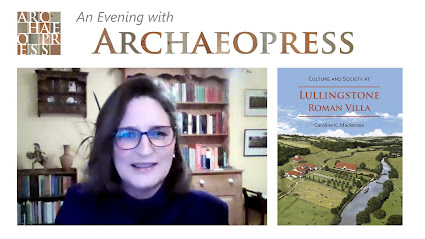 I shall be starting a new Classics Club reading group on Monday 10th May 3pm GMT. We shall be reading Homer's ‘Odyssey’ over the course of the year. Meetings will be via Zoom every week for 1h30mins. The first hour is a presentation of the text by me followed by 30mins discussion. Cost is £10 per session. For more information or to reserve a place, please get in touch:

Thank you to our local Pavilion and its committee for providing Classics Club’s first home. Looking forward to coming back to you soon! (Hopefully we won’t take as long as Odysseus to return home.) Thank you also to all the local businesses who happily displayed my flyers (and for the delicious ‘dainties’).

Thank you also to everyone at Archaeopress, especially Patrick Harris.

Last but certainly not least, huge thanks to all the members of Classics Club for your support and friendship, particularly all of you who have joined me throughout lockdown.

Posted by Caroline K. Mackenzie at 00:01