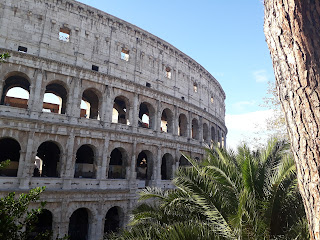 I have a confession to make: although I loved Latin at school, I didn’t enjoy learning vocab. In fact, I usually left it to the last minute and would end up revising while on the school bus on the morning of a test. [Note to any Latin pupils who may be reading this - this is not a good idea!] Fortunately, I had a lovely teacher who encouraged me and eventually I looked forward to discovering new Latin words and the access they gave me to some amazing Latin literature, such as Virgil and Ovid.

Years later (after a Classics degree and a decade as a lawyer in which I regularly used Latin), I found my true vocation (or ‘calling’, as ‘voco’ means ‘I call’). I became a Latin and Greek teacher. Vocab was something I taught (and still teach) each day. Some of my pupils found the long lists of words at the back of textbooks rather daunting. Together we created some fun ways to approach these lists. One idea was to think of an English derivative from the Latin, e.g. ‘dormio’ (I sleep) gives us ‘dormitory’ and ‘dormouse’. Likewise, ‘nox, noctis’ (night) gives us ‘nocturnal’ and when combined with ‘ambulo’ (I walk) produces ‘noctambulation’. That’s a great word for ‘sleepwalking’!

‘insula’ in Latin means an island or a block of flats. It gives us words such as ‘insular’, ‘insulate’ and ‘peninsular’

Some pupils drew pictures in their vocab books to help them memorise tricky words. So when I decided to write a Latin vocab book I asked the artist Amanda Short to create 20 special illustrations to help bring the book to life. Amanda (whose name appropriately derives from ‘amo’ (I love) !) carefully researched Roman life and mythology before producing her beautiful designs. Of these, if asked to choose a favourite I am tempted to say the ‘tandem’ one as it is so ingenious and witty [see my earlier blog on my first Latin Lexicon: http://the-history-girls.blogspot.com/2020/09/a-latin-lexicon-by-caroline-k-mackenzie.html ]; another contender is the ‘insula’ illustration which cleverly depicts two different meanings in one image. However, the gorgeous dormouse (for ‘dormio’, mentioned above) steals the show for cuteness!

Bloomsbury and I wanted to create a book that would help students and teachers whichever GCSE syllabus they are following, so we have included every word on each of the vocab lists for the two exam boards. The book includes notes to help explain some grammar and a glossary of Latin words and phrases in common use. Some of these appear in this blog, such as ‘e.g.’. Also, I couldn’t resist this more unusual one: ‘quidnunc’. It refers to an inquisitive, gossiping person - the Latin literally means ‘what now?’.

The word entries are spread out with lined spaces next to each one for readers to add their own notes or more derivatives. I hope students will really enjoy the Lexicon and that it makes learning vocab a fun and fascinating part of their Latin studies. Of course, the book is not just for GCSE pupils - it may also be useful for anyone interested in languages and etymology generally. It could be your secret weapon when tackling the daily crossword or even playing Scrabble. Did you know you can even buy a Latin version of Scrabble? 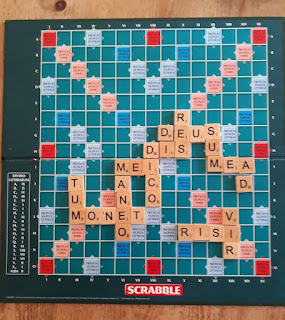 As its name suggests, the Pocket GCSE Latin Etymological Lexicon is small enough to fit into a schoolbag - so it can even be read on the school bus. However, for any GCSE pupils still reading this, a caveat: unlike I did, don’t leave it until the last minute! When it comes to learning your Latin vocab, don’t delay: seize the day. As the Romans would say, ‘carpe diem!’ 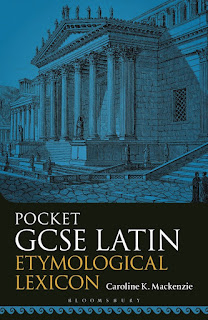 Given the historic events of this week following the sad death of Queen Elizabeth II, it seems only fitting to conclude this post with the following addendum.
The Lexicon happened to be published on the day that Queen Elizabeth II died. When someone contacted me to say their copy had strangely fallen open on page 107, I looked at the entries on that page to check the significance. I shall let the page speak for itself (‘res ipsa loquitur’). 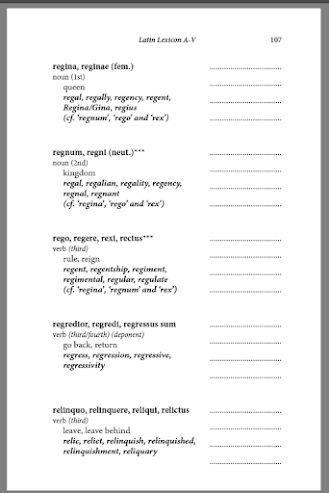 Posted by Caroline K. Mackenzie at 00:01

Spotting Latin vocabulary roots within the language one comes across can be such a satisfying & helful activity. (Though that's a strange tale about the pages in your lexicon.)

You are absolutely right about spotting Latin vocabulary roots being both satisfying and helpful.

Very strange indeed about page 107 - every word seems to tell part of the story of the week.