PURE by Andrew Miller. A review by Adèle Geras

This is the cover of Andrew Miller's novel which won the Costa Award this year. Eleanor Updale has already written about it in an earlier post where she was discussing her experience of being a Costa judge. She has a great many interesting things to say about the book, with which I entirely agree. The link to Eleanor's post is HERE

But there are certain remarks I want to make (and which I hope will add to Eleanor's contribution) about a novel which deserves to be written about more than once. The first is that Pure is, more than almost any other historical novel I've read, with the possible exception of 'Wolf Hall' by Hilary Mantel, devoid of 'pish-tushery'. That is to say, the language is at one and the same time entirely modern and also (and this is the harder bit to pull off satisfactorily if you're a writer) completely of its own period. Andrew Miller does it brilliantly. We are persuaded that people going about their business in the eighteenth century are very like us and even though the physical facts of their lives, their clothes, their burial customs, their food and sanitary arrangements and so forth may be different, we are all little changed by the passage of the centuries. It's always hard to quote a passage to demonstrate such things but here is one of my favourite scenes. Barratte has gone back to Valenciennes, which is his home, to see his family and to recruit the services of his friend Lecoeur.

"In the kitchen - that scrubbed and orderly world where even the light seems to lie like lengths of rinsed muslin - their mother is rousing the fire, dropping small wood onto small flames. She scalds cider. They drink it hot enough to make their teeth ache, put bread and apples in their pockets and set off with the mare to saw a fallen tree, an old elm uprooted in the autumn storms."

That 'rinsed muslin' is so perfect that it makes the hair stand up on the back of my neck.

Jean-Baptiste Barratte comes to Versailles in 1785 to undertake a commission for an aristocrat. The cemetery at Les Innocents is too full and the whole site must be excavated and moved to Montparnasse. Barratte stays in the house of the Monnards. He meets the organist of the church. He meets an educated prostitute and falls in love with her. There is an attempt on his life. He comes across the young men who will, in a few years, be part of the French Revolution. Miller takes advantage of the knowledge we have that his characters do not, throwing shadows from the Revolution and the Terror backwards to affect the doings and feelings of the protagonists of his novel. Already there are graffiti going up on the walls of Paris and we know what they mean better than Jean-Baptiste does. He hires men to undertake the work and buys himself a pistachio-green suit to celebrate the fact that he's now in fashionable Paris and not the country. It's a shame, by the way, that the suit has become blue on the cover of the paperback but that's just nitpicking on my part. The cover image is very striking.

This is the market place that is almost part of the graveyard. The people who live and work there are affected by the project in many ways but what makes this novel different from many others is the plainness and spareness of the narrative. Miller has not loaded us down with facts, statistics, information or descriptions. In many ways it's a very minimalist book. I can imagine settings like an excavated graveyard, a ruined church, and the palace of Versailles might bring other writers out in a positive froth of adjectives and clever similes and over-the-topness of every variety. There are many who wouldn't be able to resist the temptation to show off the stuff they'd gleaned from their research but Miller is economical with the details. Of Versailles, for instance, we see a corridor and later on, a kind of glorified shed in the astonishing final pages of the novel. We see the floor on which a dog relieves himself and Jean-Baptiste watching the yellow stream as it makes its way across the wooden parquet tiles. The graveyard shows its presence subtly, too, through the tainted breath of the Monnards who live on top of it; through the smells of the house; through the way the food and water taste of death and decay in a real and not a metaphorical way.

I was a bit nervous about the engineering, to begin with. I though there might be altogether too much detail about the struts and the joists and the tools and the process but I needn't have worried. Miller tells us just enough so that we know what's going on and not so much as to baffle and confuse us. At no time, (even though the digging up and carting away of remains is what's going on) are we in any doubt where our attention is supposed to be. The pages are full of amazing minor characters, including the doctor, Guillotin, the young woman, Jeanne, who becomes pregnant as the result of a rape, Marie the Monnard's maid and above all the thirty miners whom Barratte has brought up to Paris to do the digging up and transporting of the corpses. The miners are always there, getting on with things in the background and the small details we're given of them and the way they live on the site provide a rich setting for the main action. 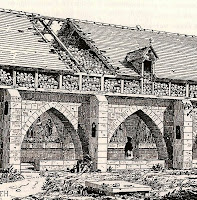 This is one of the charnel houses. If you look carefully, you can see the skulls piled high in an orderly manner. In this book, the living treat the dead in many ways as though they were still alive. Respect is granted them, for the most part even though some of the miners deck themselves in stolen rings from dead fingers. Also, of course, we who know what's coming in four years or so will catch all the metaphorical resonance. The putrefaction of the graveyard will be mirrored by the corruption of the state. Also, the sometimes brutal things done to the corpses as they're moved about and carted around remind us of the Terror to come.

The present tense, which I'm not overly fond of, works extremely well here. Eleanor remarked on it (she's not generally a fan either!) and she too was won over completely. I don't know how he does it, but Miller's present tense, instead of drawing attention to itself, and instead of being a device to make the text more 'modern' and more like television, has the effect instead of slowing things down in a way I can't quite analyse and also of forcing a kind of simplicity on the writer. The effect is stunning. Once again, one of my favourite sayings proves its truth: "It ain't what you do, it's the way that you do it."


The structure is perfect. The book ends where it began, in Versailles and with a scene of tremendous power. Anyone who's been to the Sun King's palace will appreciate how much Miller has left out. He's resisted the temptation to dazzle us with mirrored hallways and ornate gardens and instead he has focused on corridors and outhouses. Miller has eschewed obvious magnificence and showiness for a plainer and darker truth; a more readily understandable depiction of eighteenth century life.

I urge anyone who enjoys a really good and interesting historical novel to read this book. I've never come across Miller's work before but I will certainly seek out his other novels now.

PS I forgot that we'd agreed to say on our posts what we were reading at the moment! I am about to start THE SENSE OF AN ENDING by Julian Barnes. This year's Booker Prize winner.
Posted by adele at 07:30

I so enjoyed reading your excellent appreciation of Andrew Miller's novel, Adele. As it happens, I am about halfway through PURE, and I am only allowing myself small doses to make it last longer. He is such a stylist: Flaubert would have been proud of him. 'Rinsed muslin', as you say, is utterly perfect here. My w.i.p. is written partly in the present tense so I am particularly sensitive to it (and remarks about it!). I think PURE is a wonderful example of the present tense being used well. It doesn't draw attention to itself yet breathes life into the action and into the historical period. But every page of this novel reveals mastery of the form. From what I've read so far, this is a prize-winning novel that really deserves its acclaim. Lovely post, thank you.

I have recently read 'Pure' and can only add 'hear, hear!' to everything that you've said, Adele, and to Linda's comments too. It's a wonderful book - thank you for this fascinating analysis of how Miller achieves what he does.

Adele - interesting timing for me, this: first, I sat next to the publisher at a dinner last week and she promised to send me (and did - arrived yesterday!) - a copy of Pure. I hadn't started to read it, deciding to wait till a forthcoming holiday, but your mention of it as a present tense novel was timely for me because I've got to write something for the Guardian re present tense novels that work, so I'm now going to dive into this one on your and Ellie's recommendations, and perhaps I'll add it to my LONG list of present tense novels that work! Thank you. Sounds great.

You make Pure sound wonderful. Must add to my wish list. A comment about writing in the present tense. I recently finished Russian Winter by Daphne Kalotay, and although I feel it has some flaws, the author uses present tense whenever her main character is in flashback mode. The technique works surprisingly well.

Blow! Another novel I've just GOT to read now I've read Adele's persuasive review.
Anything even peripherally to do with the French Revolution tends to give me the screaming abdabs, too.
Ah well, this one does look worth it.

I have this novel sitting on my bookshelf patiently waiting (along with a great many others) to be read. Summer, I reckon. I'm particularly looking forward to seeing how Miller uses lightness of touch and economy of use with his research details. I was discussing this with another author recently on World Book Day; it's so very tempting to load the page with bright gems of interesting information, and so very hard to resist. Thank you for such an insightful review.