By the time this post goes up, I’ll be in Wales doing publicity in schools for my new book Sword of Light. A rather strange choice for an author tour you might think… until you realise my book is about King Arthur’s daughter and part of it is set at Camelot. Since there isn’t a Geography Girls blog (at least not as far as I know... are you out there, Geography Girls?), I hope you won’t mind this post on Arthurian geography as a change from Arthurian history – after all, archaeological digs are a good way to uncover history! 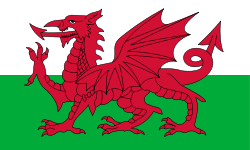 Wales has long been associated with King Arthur. If you consider the red dragon on the Welsh flag, it makes perfect sense that Arthur Pendragon - the “head dragon” - should have lived and ruled there. But even Geoffrey of Monmouth, whose statue stands in the atmospheric Circle of Legends at Tintern station along with King Arthur's, admits that Arthur originated in England and the legend spread across the border.

Arthurian names abound from Cornwall, up the length of England and Wales, and as far as Scotland. In some parts of the west country you can't walk your dog without tripping over an "Arthur's stone", but as yet no historical evidence has been found of King Arthur's court and its Round Table. So where exactly was the famous Camelot?

1. Caerleon, Wales.
A popular choice with its Roman remains and mention by Nennius. Many Arthurian novels have been set here. 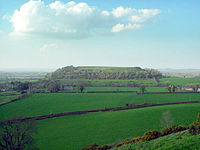 2. South Cadbury Castle, Somerset.
Another popular location, and the site of a dig by the Camelot Research Committee in 1966... they discovered evidence of an iron age hill fort but not of King Arthur. From this flat topped hill, you can see Glastonbuy Tor (sometimes called the ancient Avalon), and the village of Queen Camel is nearby. The River Cam could have been the location of Arthur's final battle against Mordred.

3. Kelliwic, near Padstow, Cornwall.
This is close to the River Camel and Camelford, which is another possible location for King Arthur’s final battle on the field of Camlann against his nephew Mordred.

4. Scotland
Many locations in Scotland have Arthurian names, and "Arthur’s Seat" is in Edinburgh. I favour Scotland for the villain of the story, Prince Mordred, but that might be because I'm a west country girl!

6. In the sea
I recently came across this location in the TV series "Camelot", which placed Arthur's castle teetering on the edge of a nameless windswept cliff… the theory being that Camelot and its Round Table has long since crumbled away and fallen into the sea, which explains why we have found no trace of King Arthur’s court. Quite a neat idea. 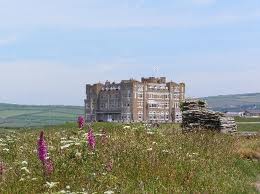 7. Camelot Castle, Tintagel.
You can stay there today. Really. This one is not a ruin, and it's on my wish list for a Pendragon Legacy event... or, if the books sell well enough, maybe I'll book a night or two there to celebrate the end of the series!

So where did I decide to set my Pendragon Legacy series? Well... if you haven't guessed yet, you’ll have to read the first book to find out!

SWORD OF LIGHT (Book1 of the Pendragon Legacy) is now available in hardcover priced at £9-99, and if you're very quick there is still time to enter the History Girls February competition to win a FREE copy by naming a fairy horse (competition closes tomorrow, 7th March).

More details of the Pendragon Legacy quartet and Katherine's earlier books can be found at www.katherineroberts.co.uk

Lovely article, I really enjoyed reading about all these magical places. Mordred being from Scotland rings a bell - wasn't he half-brother of Gawain, Agravaine,Gareth and Gaheris who came from Scotland? Can you tell that The Once and Future King was a favourite childhood read of mine? Your book looks terrific - great subject to choose.

Best of luck with the Welsh book tour. What wonderful locations for Camelot, and I love that there was once a Camelot Research Committee!

I favour a very bizarre theory that it was a corruption of Camulodunum (Colchester) - which would make him an Essex boy!

Thanks griselda - yes, Mordred was related to the knights you mention in the legends.

Thanks, Linda! I have just got back from the tour, which finished at Caerleon Comprehensive today... so very appropriate for a book about King Arthur.

That's an interesting theory, maryom. I was talking to someone today who says Camelot is a spiritual place you can carry in your heart, and not an actual place at all. Since nobody has yet found the ruins, that might make sense, too.