Even now I’m not sure in what specific year Great Aunt Mary was born. When I was growing up she always claimed to be a child of the ‘modern era’, but as I got older and recalled the stories she’d told me of her youth, I began to think that her actual birth day must have been in the last years of the nineteenth century rather than the opening years of the twentieth. She was brought back into my mind over these last months as I was liaising with my editor on the re-issue of Remembrance, my book about youth in WW1, the new edition of which is due to be published next month. 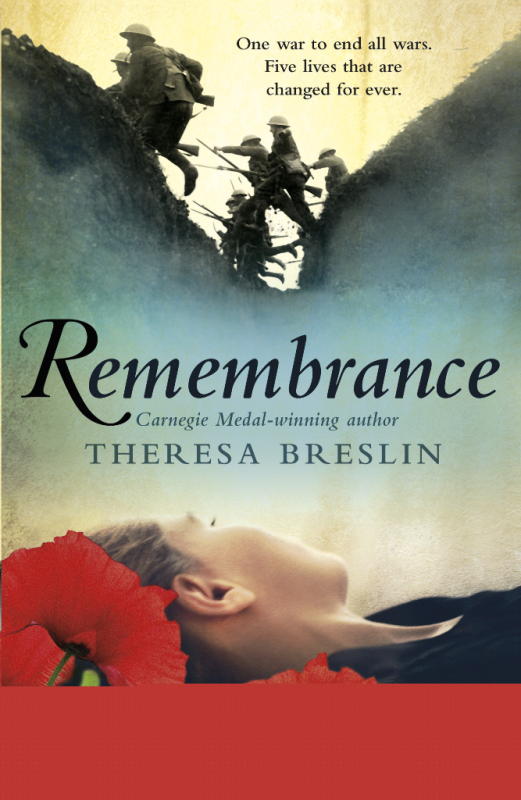 There was tweaking to be done here and there. Am I alone in noticing places where my text would benefit from a comma / preposition more or less when doing readings from my  work? I also spotted a few typos that were missed first time around, and had been carried over even during in the transition from hardback to paperback. But the main bulk of my work was to prepare Readers Notes for inclusion in this new edition.

And it was then that I started to think of Great Aunt Mary.
In her youth the most obvious outrageous thing about her was her appearance. She wore trousers. In public. I recall my mother saying that it was known as a family disgrace, a notable scandal in our very small town. She told me about this in a slightly shocked tone of voice (tinged with admiration?) It wasn’t so much a girl wearing trousers that upset people. It was the fact that they buttoned up the front. It would appear that they would have been deemed infinitely more modest if they had been fastened at the side.

She was the inspiration for Maggie, one of the lead female characters in Remembrance. The custom in Great Aunt Mary’s home was after dinner, which had been shopped for, prepared, cooked, served and cleared up, by the women of the household, the family sat before the fire for an hour or so before retiring. The men might smoke but the women’s hands were not idle either. They busied themselves knitting, darning or sewing – there was always work to be done. Father would read the newspaper and, when he had finished, he would then read it out aloud and give them his opinion about the items it contained.

As Great Aunt Mary progressed into her teens it dawned on her that her father was censoring what he told them. It caused a tremendous row one day when she voiced a different point of view. She quoted facts to support her argument and he asked her where she got her information. When she replied, ‘In the newspaper’ he was furious. She must not read his newspaper. It would upset her too much. He knew what was best for her. He forbade her to do it again. Great Aunt Mary went out and got herself a job delivering newspapers. Then she proceeded to read every newspaper, magazine and journal she could get her hands on. Given an opportunity she would have a set-to with her father and anyone else who tried to tell her what to think.

In Remembrance Maggie’s father reads out the newspaper to the family, omitting the negative news about the progress of the War. It’s only after having a conversation with Francis, the young man from the manor house outside the village, that Maggie realises this.
I knew I wanted that scene. But I had to find the trigger for it. Part of my research was going through copy after copy of The Times, making notes and collecting items both ‘shiny’ and dull. This is what I found. 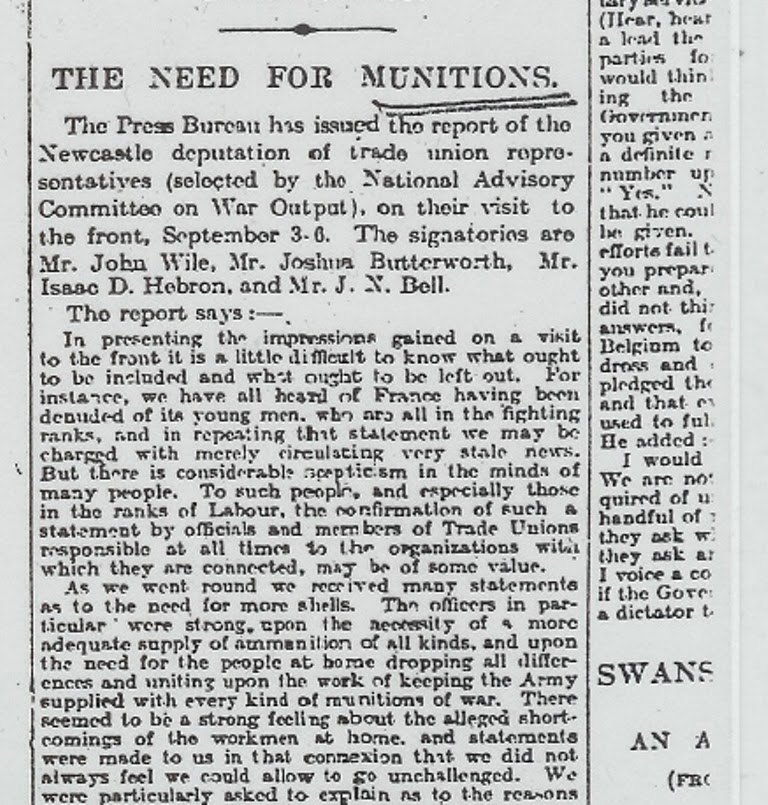 It’s an account of the battle of Loos where, after suffering heavy losses to take a position, the Allied troops ran out of ammunition. As Maggie’s twin brother is fighting on the Western Front this is a news article that Maggie’s father would keep to himself. Aha! My story progresses as planned. But wait! Here’s the thing. I had intended Maggie to become a nurse. I had done the research. I had outlined scenes - with dialogue. I read and re-read the chapters I’d just written re Maggie’s elation and sense of fulfilment at reading the newspaper for herself, and of having enough knowledge to be able to discuss the War on equal terms with another intelligent human. But, after that, what would Maggie do? What did Great Aunt Mary do when she saw the posters asking for women to help the War effort? There's a brother out there fighting. The soldiers need ammunition…. 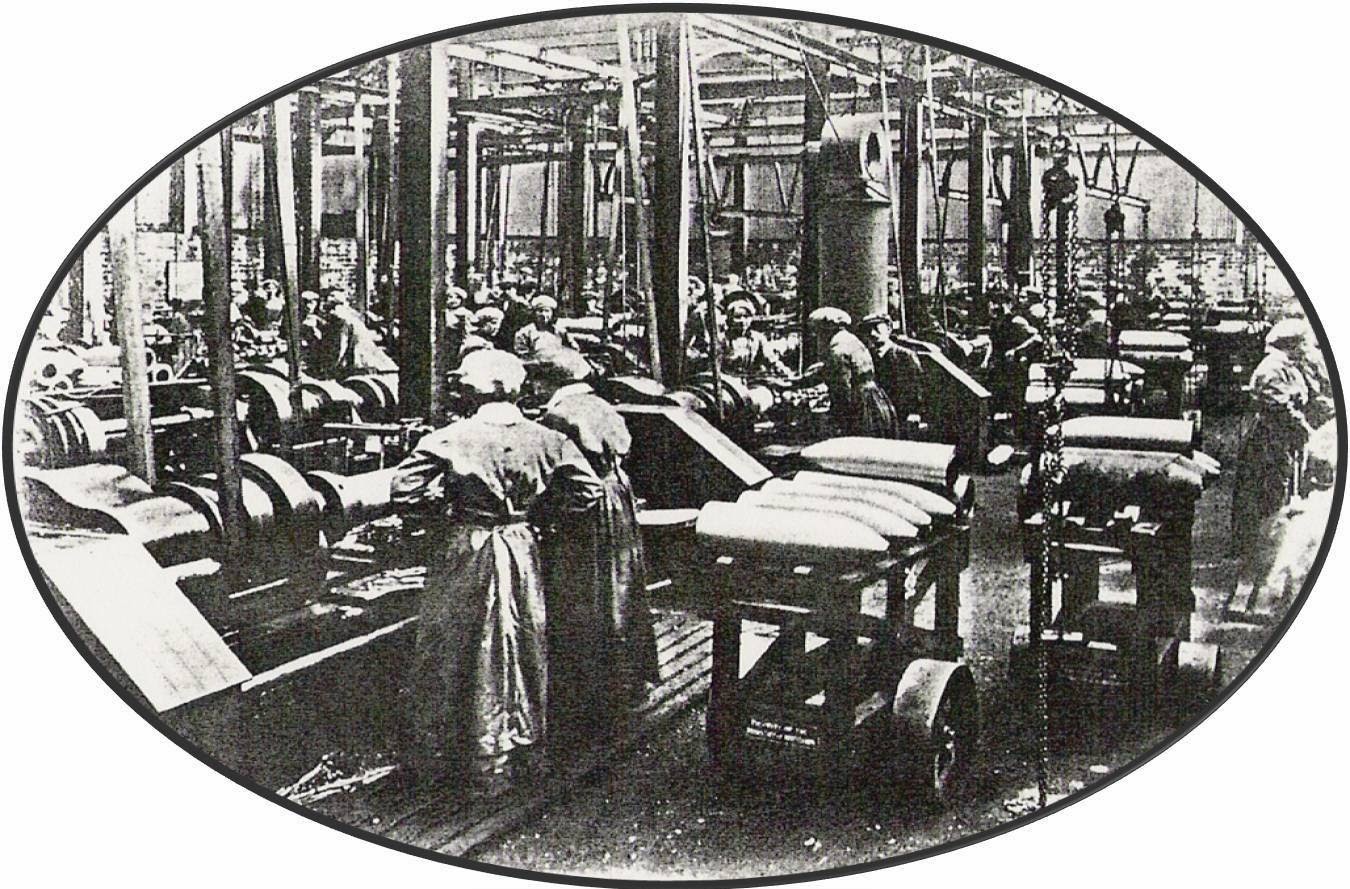 Yes, indeed, a feisty girl would do War Work. Now I have to dig up everything I can find about munitions factories and ask elderly relatives about my personal Cranky Old Lady. Great Aunt Mary stories come flooding back. The stand-off with management when they tried to restrict the toilet breaks of the women workers, the ignoring of basic safety rules and being called a traitor if you complained. Women munitions workers lost fingers when dealing with unstable explosives. It’s not all in the book, but the backdrop is there. And in time, so also is the decision, after staring at the ‘sullen rows of shells’ and thinking of her brother lost in the War, Maggie makes to turn to nursing.

I felt a deep responsibility when writing Remembrance, not only to get the facts right, but to be true to the people of the time. To connect to the past with a life-line of real characters.
For this new edition, adding the section at the end to show photographs taken when I visited the Battlefields of the Western Front, with excerpts from my research diaries, and writing up the Readers Notes has taken me on journey which I hope others can share.

Mary sounds wonderful! I've just been told in tones of disgust by my mother that I'm 'a feminist' because I was outraged that a small boy I know is to inherit a large estate while his older sisters get none of it. 'And what is wrong with being a feminist', I asked? 'They are so strident' was all she could offer. Huh! Hooray for strident women when needs must. Thank you, Teresa.

My daughter read and loved this as a teenager, and I did too. (Well, not as a teenager.) Will go back and re-read. Mary sounds great!


Thanks Pippa and Sue - Mary was wonderful and great but very formidable in a slightly scary way. Only as I got older did I appreciate how much courage it must have taken to be different in a small town and take such ground-breaking actions


Just a thought Pippa - Have you read the poem 'MEN TALK' by Liz Lochhead? It's brilliant. You might want to show it to your Mum...

Thank you for sharing these stories of your Great-Aunt Mary!

As a member of the Third Wave of feminism (I was born in the mid-70s) I love, love, love hearing stories about the strong, outspoken, brave women who came before us. They paved the way, and I'm so grateful that they did.


Thanks Meredith. Definitely we rose higher on their shoulders.

Great post Theresa. One just can't imagine a father forbiding a daughter to read the newspapers! Your Aunt sounded marvellous. The book too!


Thanks Dianne. I hate to tell you this but about five years ago when I was doing a presentation on the book in a school an English teacher told me she'd asked her pupils to scan whatever newspaper was at home and write some comments on the articles. A girl pupil told her the next day that her dad had said the newspapers in the house were his and wouldn't let her look at them!

What a woman! Thanks for this Theresa....