Fear of Puppets Overcome by Curiosity, by Louisa Young

Last year I found myself embroiled in a country & western shadow puppet production homage to Truman Capote's 'In Cold Blood'. Yes I did. Really. I played a murder victim or two, whistled 'Yellow Bird', manipulated cut-outs on a lightscreen, and sang songs - including some that I had written! - in front of an audience which turned out to include David Gilmore from Pink Floyd.

But I hate puppets. They're scary. I have been scared of puppets my entire life, ever since my big siblings used to spook me with our old family glove puppets - Sooty, Sweep, that kind of evil demon. We had a strange set of Cinderella on wires as well, 1950s versions of 18th-century archetypes, wigged footmen and green-eye-shadowed Ugly Sisters, and some peculiar Neapolitans involving Roland and Oliver, with swords. I have been threatened with visits to marionette museums in Sicily and on Alicudi and Siracusa. I do not want to go. But I followed this puppet show to farthest North Norfolk, and to Wigtown in Galloway. I loved it. It made me cry.

I was lured into this unlikely escapade by a woman called Allison Ouvry. She's a clear-eyed Californian redhead, musical, passionate, obsessed, adorable. Oh heck, here she is, let her explain:  https://t.co/Hm1LXYAb7L

I mention all this because, she's done it again. She has persuaded the Victoria & Albert Museum in London to let her loose in its Puppet Archive - did you know they have one? It's just by Olympia, in  the former Post Office Savings Bank HQ. Two hundred and fifty puppets lie sleeping there on shallow shelves, behind glass, frogs and monsters, princesses and dragons, soldiers and animals, an owl and a camel, Punch and Judy, awaiting the call to jump up and dance again.. . . . . . 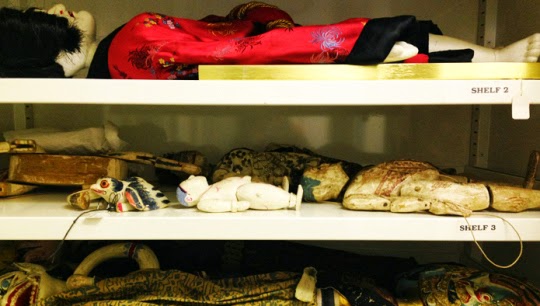 And the V&A has just acquired Joey the Horse from War Horse, donated by Handspring, though he's not, presumably, heading straight into pasture in the archive: 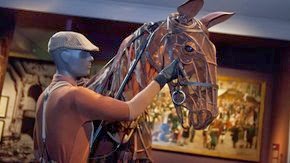 Allison, her husband and co-puppetteer Martin Ouvry and a host of puppet talent including Max Humphries who has worked for the National theatre, the Royal Opera and the Royal Ballet, have made the call. They have chosen  a three-headed Scaramouche, a girl called Pimpinella, a Turkish shadow Kharagoz, a skeleton, of course Mr Punch and a strange and handsome man called the Martinek Giant, and rescued them from the depths of oblivion. Here they are, in an 'Ellen'-style mass selfie: 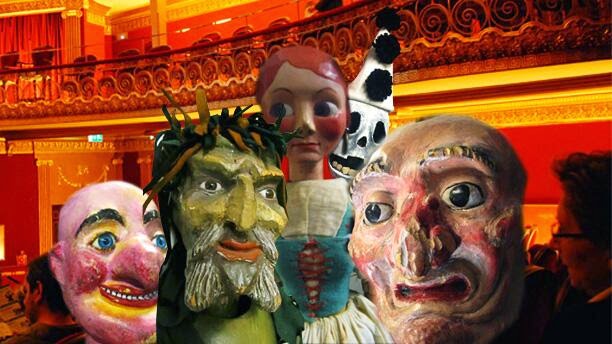 And here is a close-up of Martinek. To be honest he reminds me of Martin Ouvry. But scarier. 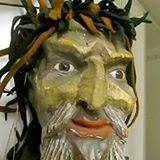 But who are these characters? Good question. And one they themselves will be asking during Shakespeare: The Puppet Show, the plot of which looks alluringly like a cross between Toy Story and Britain's Got Talent, as they flee the archives and audition for various parts in various Shakespeare plays.

It's half an hour of educational Easter fun. I wish I was in it. I wish I had been into the puppet archives of the V&A. Why am I telling you this? Because puppetry is not dead, and nor is it quite as scary to me as it used to be. Not quite. And I'm going to see the show.

Sounds fascinating. Sometimes, and for reasons like this, I wish I lived in London!

I was terrified too. Spent every puppet show hiding under my jersey and peeping out. The V&A continues to amaze. Who would have imagined all those sleeping puppets. Buying tickets today! Thanks for fascinating post.

Thank you for telling us about this! I have seen the historical puppet show in Siracusa and it's a combination of hilarious and horrific. When someone dies they are whisked up to Heaven with remarkable efficiency. Lots of people die. Lots!

Meant to say there was some idiosyncrasy here... my post yesterday had an image of the Handspring giraffe puppet.

I was and still am terrified of puppets, so I won't go. How brave of you, Louisa!