I recently took a tour around  Leinster House, the Dublin home of Ireland’s Parliament. It seemed to have many features that echoed its historic links with the Palace of Westminster but none of Westminster’s idiosyncrasies. Then I discovered that since 1998, when modernisation fever struck, even Westminster has been purged of much of its quirkiness.  But not entirely.


First the casualties.  The opera hats have gone.  Before 1998 if a Member of Parliament wished to raise a point of order during a division he had to do so ‘seated and covered’.  At all other times an MP must stand to speak. That’s why, if you watch a televised debate, they’re up and down like meerkats with haemorrhoids trying to catch the Speaker’s eye. ‘Covered’ meant wearing a hat, and for that purpose two collapsible top hats were kept in the Commons’ chamber, to be passed hastily along the benches to whichever MP required ‘covering’ before he could raise a point of order.


I’ve searched in vain for a photograph. I wonder what happened to those redundant opera hats. I did enquire at the Commons' Information Office but they didn’t get back to me. I guess it wasn’t the most urgent enquiry of the week.


Eating is now prohibited in the Chamber though this wasn't always the case.  In the 18th century MPs would crack nuts and suck oranges and leave the debris behind them, much appreciated by the resident vermin (of which, more anon). Nowadays the problem must be getting MPs to turn their phones and pagers to Vibrate.


‘I spy Strangers’ has been hollered for the last time. The public gallery is now rarely closed. And what used to be the Strangers’ Cafeteria is now called The Terrace Café, which sounds much more appealing. Espresso macchiato instead of tea and buns? The Strangers’ Bar lives on, and the Strangers' Dining Room, and why not? Parliament can do its business efficiently without rearranging all the furniture. 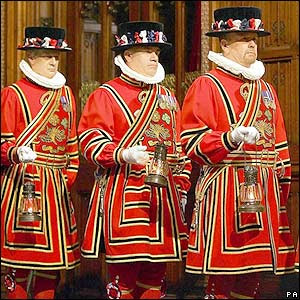 And there are some gratifying (to me) survivors of a bygone age.  On the eve of the State Opening of Parliament a group of Yeoman Guards still searches the cellars for barrels of gunpowder. Here they are, advancing with cat-like tread and storm lanterns.


An MP’s coat hanger still has a loop of pink ribbon from which he can suspend his sword before entering the Chamber. It is sometimes alleged that the expression ‘toe the line’ originated in the Commons, referring to the lines  -  two precautionary sword lengths apart  - which MP must not cross no matter how heated the debate. In fact swords were never worn in the Chamber even in the days when no gentleman would leave home without one, so the derivation is bogus.

So no swords, not now, not ever, and there is still a non-negotiable proscription against wearing armour. Just so you know.

Smoking in the Commons’ Chamber has been prohibited since the 17th century but not the taking of snuff.  In fact snuff is still freely available to MPs. It was traditionally English Rose mixture, available from a box kept by the Doorkeeper and paid for out of petty cash.

The last MP known to have been a regular user was the late Sir Nicholas Fairbairn. Given what we now know about him free snuff was possibly the least of his vices.


When the House rises, often at an ungodly hour, the Doorkeeper still calls, ‘Who goes home?’ though it apparently sounds more like ‘Hooooome?’  This is a revealing relic. It dates from a time when Westminster was a dangerous place, the haunt of cut-throats and footpads. It was safer for MPs to leave the building in groups, and for those who lived on the Surrey side of the river, there was also the possibility of splitting the cost of a ferryman. Rather like sharing a taxi today.


Finally, no account of the oddities of Parliament would be complete without mentioning its non-human members. The story that Charles II obtained an exemption from the general ban on dogs so his beloved spaniels could accompany him to Parliament is apocryphal. Blind MP David Blunkett’s succession of guide dogs have had the place to themselves.


The Palace of Westminster used to have a falconer on the payroll but that work is now put out to tender. A self-employed falconer brings in his Harris hawk on an As Required basis. His mission: to encourage the pestilential pigeons to... relocate.


Vermin  -  no jokes, please  -  have always been a problem in the Palace of Westminster, as in any old, riverside building. The Parliamentary Estates Directorate keeps a monthly record of Mouse Sightings. Moth Sightings are also recorded. Somewhat surprisingly there is no register of Rat Sightings. Perhaps the humans aren’t expected to distinguish a small rat from a big mouse. You’d think they’d employ a cat but whenever the matter has been raised  -  ‘given full and proper consideration’ is the actual phrase, it has been rejected on the grounds of  ‘clear practical and technical difficulties’.  Perhaps the cat food bill would have implications for the snuff budget.

I have discovered plenty of new information here, Laurie, thank you. I love the idea that barrels of gunpowder are still searched for.What costumes those Yeoman Guards have. Splendid.

What an entertaining post Laurie! An usher of the House of Lords is one of my readers and he invited me and my agent to a private tour of the House of Commons and the House of Lords. In the Lords there is a balcony round the top of the chamber its base is frocked with a red velvet curtain. This was put up to prevent the lords form being distracted by the sight of women's legs once skirt hems started to rise!

Thanks for that, Elizabeth. I guess it obviated the need for a new cry, 'I spy knees!'

I once knew someone who took snuff. I tried a pinch, and I seem to remember it was very good for clearing the tubes... could do with a bit at the moment!

How wonderful. I wonder what the practical objections to a cat are?

Great fun. Although I love this history, sometimes I do wonder whether the whole place should be relocated to a transparent glass building in Birmingham, and the old palace be turned into a museum...