Food history is important to me. When I wrote The Time of the Ghosts, I made sure that every single character’s cooking and eating habits reflected their lives. You can deduce who has lived where and what they’ve done by what they cook and what they eat. You can also deduce those for whom food is not terribly important. In fact, if you watch the food, you can unravel characters’ secrets. 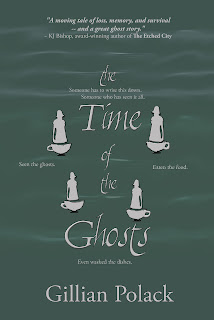 This means that when Elizabeth Chadwick wrote her History Girls’ post on medieval food, it brought me to my next novel and made me think “What did I do with the food in it?” This last month or so I’ve been working on my non-fiction, so I had to actually go back into the world of my novel and reconstitute my thoughts about food. Since a significant part of the food in The Wizardry of Women's Stuff (which will be out in a couple of months) is based on my family’s foodways from the nineteenth century until the 1980s (when my cooking and eating started to diverge drastically from family tradition) this little exploration also took me into my family’s past.

What I discovered was that London Jewish cooking was different in the early part of the century to the later. The food early on was partway between traditional Sephardi and very London. There were lots of flavours from the Mediterranean and North Africa and the Netherlands – a legacy of where Sephardi Jews fled to after they were expelled from Spain in 1492. My family brought those flavours to Australia in its cuisine, which shows where that side of the family comes from. We have recipes for popular foods (stuffed monkeys, Madeira cake, seed cake) but also for scones and raisin wine. What was lost in my family’s transition to the colonies were the Sephardi festive foodstuffs, the ones that appear in the very first Jewish English-language published cookery book. Subtract those recipes from the book and you have my grandmother’s personal cookbook. I don’t just know this from a general guess: I actually made a table of the recipes from each book and compared them and tested critical elements (and cool recipes) from each.

This says a lot about nineteenth century Australian Jews. They came from many places, and, for my novel, I had to be careful to develop a tradition that belonged to one family. I didn’t want a generic Jewish culture in my novel. I’ve been doing some reading of other novels that contain Jewish characters recently, and all too often, authors decide that a generic Jewish culture is good enough – that takes individual lives out of the story, which makes the story so much less interesting for readers. So, no generic. I needed something as precise as my family’s food tradition.

I worked out when the family came to Australia (just before the Goldrush) and where they came from (Home Counties) and what their background was (educated and innovative, but with some very interesting hidden heritage). This drew me inexorably to Mrs Montefiore’s cookbook as a basis for the tradition. The book was known in Australia around that period, so that was easy.

How do we know it was known in Australia? The very first published Australian cookbook plagiarises it. There’s a copy online at the National Library of Australia if you want to check this out!  I discovered the plagiarism when I was trying to find out if my ancestors had access to chorissa (kosher chorizo) in Melbourne (I was trying to find out why my family lost and gained different dishes) and was torn between horror and amusement. Abbott (the author) felt there was a need for “Hebrew” recipes in his book and he lifted straight from Montefiore's The Jewish Manual, down to the footnote on where to buy chorissa in London.

I had the book, I had proof it was known in Australia, and, thanks to my grandmother's enthusiasm for writing everything down, I even knew how the cuisine was changed to fit Victorian surroundings. Victorian in both senses, for it was during the later Victorian period that items like chorissa were dropped and that meat and three vegetable became the staple dinner. Some London region style puddings replaced the dishes that disappeared. Apart from dishes where the ingredients were unobtainable (why I was checking chorissa) the main dishes to be replaced were mostly sweet dishes of various varieties – what were called in my childhood ‘sweets’ and ‘pudding’.

That was almost all of the work done. I just had to add my characters’ lives and their personal tastes, and I had a cuisine! What’s more, I had both a historical cuisine that I could include as family history and a current one that one of my characters could burn with aplomb.

The work for The Wizardry of Women’s Stuff was a lot easier than the work for The Time of the Ghosts. I only needed the one cuisine, for one thing. I developed three major ones for The Time of the Ghosts and bits of others and some of the dishes have fascinating histories. Some of those histories are linked to the plot, however, so I can’t tell you them without giving spoilers. If you’ve read the book and you find me somewhere, ask me and I’ll tell you all the secrets.

It strikes me that one day my readers might want the cookbook for my novels. It would contain a lot of very good food! In the meantime, I shall continue to cook that food.

Every time I create a cuisine for a character, I get to eat wonderfully. Right now I’m testing seventeenth century food for the St Ives novel I'm writing this year. Seventeenth century English food was not one of the great cuisines in world history, but it's fascinating nonetheless. If anyone wants to learn my processes up close, I’m always happy to share the testing. It helps to know what other people think of recipes.
Posted by Gillian Polack at 01:36

A cookbook for your novels - what a fabulous idea! Thanks for a very interesting post!

Fascinating! You should publish your cookbook - great way to publicise your novels.

I had never heard of stuffed monkey cake. I looked it up - sounds delicious.

Joan - I'm glad you enjoyed it!

Susan - the way my family made it, it's a biscuit (or, given its Dutch origins) a cookie rather than a cake, but I've seen versions that are plate sized, with a face drawn on them. It's just a stuffed pastry, really, but my aunt used to marinade the fruit stuffing in good whiskey and let it sit in the dark for six months, which made my family's version quite, quite different to the published recipes I've found. My father used to sneak the fruit while it was marinading and then complain when it was all gone "Because the stuffed monkeys don't taste as good as they usually do."