I have spent the week before last in Builth Wells, a tiny town in the middle left of Wales, famous for a giant bull, a beautiful bridge over the River Wye and the show ground for the annual Royal Welsh Show, a kind of Glastonbury for farmers.

There's a beautiful mural too, vaguely Bruegelseque, my picture doesn't do it justice, of Llewelyn ap Gruffudd, last true Prince of Wales' sad winter retreat. It's by Ronald Swanwick and was painted by the artist and Neil Chambers.

I've copied a picture off the town website so you can get a better view. 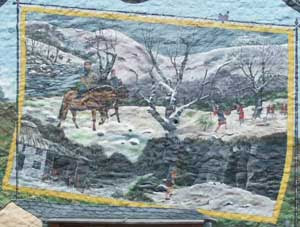 Close to Builth, 2 miles north at the small village of Cilmeri, Lewelyn made his final stand against the forces of the English King Edward the first.  It was December 1282, and Wales and England had been fighting on and off for the last five years. There'd been successes on both sides. Edward had managed to push Llewelyn's forces back into the mountains of Gwynedd, while Llewelyn had scored some famous victories against Edwards forces, notably in Anglesey and at the Battle of Llandeilo Fawr.

Llewelyn was lured south out of his stronghold in Snowdonia by the promise of support from the people of Brycheiniog, what is now Brecon in South East Wales. But it was a trap to draw out the Prince and allow Edward and his massed army to crush Llewelyn's forces for good.

It's said that he turned to the Castle at Builth and asked to be taken in but they refused him. Were they scared? Did they want no trouble? Where were the English fighters stabled and fed and watered? Whose side was anyone on?

The battle was hopelessly one sided, a few thousand Welsh fighting men against a combined army of English and Marcher Lords soon wiped Llewelyn's army out. It's said nearly every man was killed. Wen they recovered Llewelyn's body the day after the battle, Edward ordered the head to be taken, and crowned in ivy it was paraded through the streets of London and stuck up on a stick on the Tower of London where it stayed for fifteen years.

I started walking out to Cilmeri but was defeated by mud and rain, so I went looking for information online. What I found made me feel a little bit queasy.

There's a ceremony every year at Cilmeri, people from all over remembering not only Llewelyn the Last but all the 'fighting men of Wales'. The pictures of the event made me uneasy. Men marching down village streets in faux military garb. Men with berets and lighted torches around the memorial to Llewelyn.

Hmmm. Not a good look.

Now, please, I am all for Welshness. And Builth Wells, has remarkably little of it. But I don't want those marching men speaking for  Wales or Welshness at all.
If we're going for remembering I would rather this: Gerallt Lloyd Owen, 1944-2014, reading his poem Cilmeri;  https://www.youtube.com/watch?v=m1miedWMMow

Catherine's latest book is The Curious Tale of the Lady Caraboo

Posted by Catherine Johnson at 08:42

Catherine, I can't get the link to the poem to work - is it just me? I'd love to hear it!

Yes, I agree. The mural seems a much better way than paramilitaries, which do rather sadly make me think of Northern Ireland. It is very sad, however, to think of the invasion and conquest. I enjoyed the poem very much, though I couldn't understand the Welsh. The sound of the words is marvellous.