The Lady on the Cup - Celia Rees 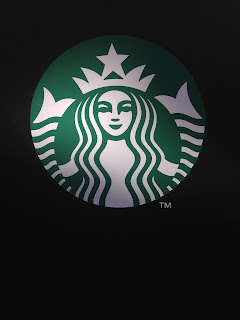 What's yours? Tall Latte Extra Shot To Go? Or De-Caff Skinny Cappuccino?  We all know what it is. What it means. Whether you like the coffee or not, the brand is so powerful that is has spawned its own language. It's trade marked logo has become ubiquitous, instantly recognisable, like Coca Cola but even more potent because there are no words. It is one of those signs, accepted and recognised without anyone thinking too much about what is actually depicted.

It is a bicaudal, a melusine, a mermaid holding her tails. In legend, the fairy Melusina married Guy De Lusignan, Count of Poitou under condition that he would never intrude upon her privacy. She brought him great wealth and happinesss and bore him many children but, inevitably, he broke the taboo, spied on her while she was bathing and discovered her secret. She transformed into a dragon and was never seen again, although she is supposed to act as the protectress of her descendants.

This legend of a creature, half woman, half fish,  sometimes with one tail, sometimes with two, occurs in different parts of France, Germany and the Low Countries and was used to some effect by Philippa Gregory in The Lady of the Rivers and The White Queen. These versions all have a roughly similar story, one of secrets and the breaking of prohibitions, and are medieval in origin. Images of the two tailed mermaid, however, are far older. She can be found in churches all over Italy and France - on marble pavements, above doorways, up pediments and pillars. Some of the oldest are Byzantine and date to the 6th Century A.D.


And she's here in Britain, too, frequently under seats as misericord carvings, often holding a looking glass and comb, which are also the essential props of her sister, the mermaid.


Seeing a mermaid, one tail or two, was not good news for any mariner. They were creatures of intense ill omen.

The mermaid, her two tailed sister and their feathered Greek cousin, the Siren, were associated with the death and destruction of men. Their origins are almost certainly pre-Christian, rooted in the worship of water spirits and goddesses associated with rivers, lakes and the sea. Their presence in Christian places of worship could suggest that they still needed to be propitiated. The churches that contain examples of these strange and fascinating images are often, although not always, near the sea. The mermaids were also probably there to offer a different kind of warning: against women in general (they're all like that down there really - look at that Melusine), lust in particular and sins of the flesh. 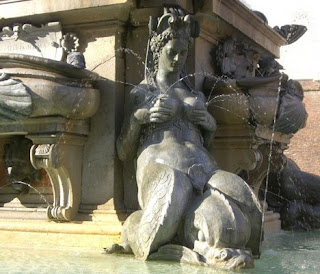 The two tailed mermaid is the subject of differing legends and has a fascinating history. Her most modern incarnation continues the tradition:

'Let’s go all the way back to 1971, to when Starbucks was first coming to be. In a search for a way to capture the seafaring history of coffee and Seattle’s strong seaport roots, there was a lot of poring over old marine books going on. Suddenly, there she was: a 16th century Norse woodcut of a twin-tailed mermaid, or Siren. There was something about her – a seductive mystery mixed with a nautical theme that was exactly what the founders were looking for. A logo was designed around her, and our long relationship with the Siren began.'

Over the last 40 years we’ve made some changes to that identity...' they continue.  How very true.

A bold statement and very much in keeping with the time honoured and age old depictions of our bicaudal mermaids. I mean, why would they wear bikinis? This was changed, however, and pretty quickly. There were complaints. Not everyone was ready for such a full frontal celebration of the female form, it was putting them off their coffee, so the logo was changed to:
She was given longer hair, her waves falling to  cover her breasts and preserve her modesty. But there were further problems, this time it was her belly button (I'd say that was the least of it) so the image was changed yet again.

Her tails have almost disappeared. It is now very difficult to detect her exotic and evocative origins. In 2011 the logo was changed once more. The lettering was removed, leaving an image recognised by everyone, everywhere, thus allowing Starbucks to reach advertising Nirvana. 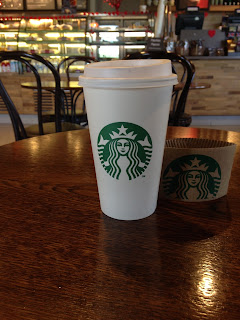 I owe what I recognise could turn into a bit of an obsession with bicaudal mermaids to my friend Ismay Barwell. Thanks to her, I'll never look at a Starbucks cup in the same way again.

Thanks for a fascinating post, Celia! I'd never thought much about this logo, but you're right, it is very recognisable. I remember an art teacher friend of mine talking to her Year 8 students about heraldry and pointing out that modern logos serve a similar function to mediaeval shields. You should really be able to take a look at it and be able to recognise immediately who you're dealing with, something that must have been necessary across a battlefield.

But the mermaid is a very interesting being in her own right. I hadn't realised they even hang around in churches!

That's so interesting, Celia. I've always loved stories about mermaids and didn't realise they had such ancient origins. Do you think water nymphs like Rusalka and Ondine are related?

Really enjoyed this post and all those amazing mosaics and carvings. How far that early Starbucks logo has come. That face had always seemed an odd choice - too historic and interesting, imo - but the link with the ocean-going coffee trade at least explains the original impulse even I'm not sure she deserves being so used.

How interesting - I'd never really looked at the Starbucks logo before. And I'd heard of Melusine, but didn't know her story. Thanks, Celia!

I agree with Penny ... not sure she deserves to be used in this way! Some companies are not to be entrusted with history.

Thanks for the comments. By the time Starbucks came to Britain, she'd almost lost her tails. I kind of registered what she represented but found the adjusting and re-adjusting, how much the image had changed over the years, quite fascinating.

Actually, Sue, Melusine would be an ancestor of at least some of the British royal family through Elizabeth Woodville, whose son by her first marriage was, I think, an ancestor of Princess Diana. A fascinating connection.

Do you love Pepsi or Coke?
ANSWER THE POLL and you could win a prepaid VISA gift card!