If winter's getting you down and you're longing for a walk in a sun-drenched garden, heavy with the perfume of brilliantly coloured flowers and tinkling with the tranquil sound of fountains, fear not; you can avoid the expense of a holiday in warmer climes and the inconvenience of airport queues by wending your way instead to the Royal Academy, where a luscious exhibition entitled Painting the Modern Garden lies drowsily waiting for you to open the gate, wander in, and breathe in the beauty. 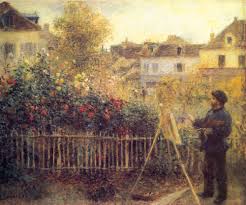 Claude Monet is the linchpin of the exhibition. The first two paintings both show the garden he had as a young man, in Argenteuil. One is by him; the one above is by his friend Pierre-Auguste Renoir, and it shows Monet painting. Gardens had become very popular in France by the time the Impressionists were painting; Pissarro and Caillebotte were also enthusiastic - not just about painting gardens, but about creating them. For Monet, of course, it was a passion which continued throughout his life.

But the exhibition is far from being just about Monet. Each room has a different theme. After Impressionist Gardens, we get International Gardens, which features paintings by John Singer Sargent, Max Liebermann, and a Spanish artist, Joaquin Sorolla, whose painting of the garden at his house in Madrid is suffused with warm pinks and reds, with heavy roses dripping from a rambler that climbs up against the terracotta wall. It's redolent with the heat of summer in Spain, but also with the oasis of shade a garden can provide. 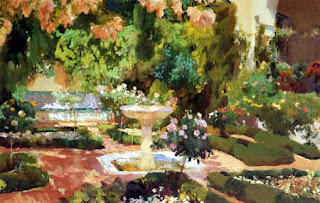 Then we return to Monet's Early Years at Giverny, which is of course the garden he's famous for. This section tells the story of the development of the garden, giving us a sense of Monet as a highly skilled and respected gardener as well as an artist: here are seed catalogues, a letter he wrote when planning permission for the extension to the garden, which involved diverting water from a nearby river to create the waterlily pool, was initially turned down. And here too are rows of plants, cuttings, perhaps: which remind us of the work behind the beauty. I noted down the words of a garden writer on seeing some of the first pictures of the pool and the lilies: 'No more earth, no more sky - no more limits.' They must have seemed astonishing: revolutionary.

The next room is called Gardens of Silence. There are no people in these gardens. They have an other-worldly feel to them: these are not gardens for every day. This one is by another Spanish painter, Santiago Rusinol. I found it mesmerising, with the pale, ghostly tree in the centre set against the backdrop of glowing autumnal copper and gold, which is echoed in the colour of the circle of rose bushes. Rusinol was apparently fascinated by the Alhambra and other secluded Moorish gardens in Andalucia. This garden was in Aranjuez, and it was part of a great and formerly glorious royal garden. The dramatic, hot colours contrasted with the vivid green of the foreground perhaps suggest the drama of the history of Spain, as well as its southern heat and light. 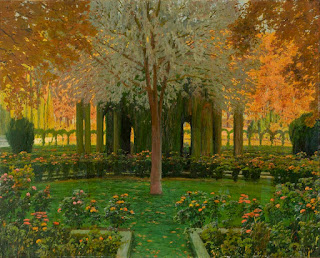 I really liked the paintings by Emil Nolde which were in the next section, Avant-gardens (Nice title!). I can't find a reproduction of any of those in the exhibition, but they had gloriously rich, vibrant colours. One was a close-up of vivid blue hyacinths, scarlet tulips, the bright green verticals of stems and leaves, and egg-yolk yellow narcissi; another had white peonies and gold and purple irises.

Gardens of Reverie was probably my least favourite room. But then we were back to Monet's Later Years at Giverny. He was still painting the same beloved garden; but now, in 1918, with the horror of the First World War coming closer and closer, he poured his pity and his horror into a painting of a weeping willow with an orange trunk. The brush strokes writhe and twist as if tortured: there is a palpable sense of pain and sadness - agony, almost. He said sadly, 'Others can fight. I can paint.'

But then, finally, we come to the massive paintings of the water-lily pool which he made after the war. And with these, there is a sense that he was expressing through paint harmony, serenity and balance restored. Paintings to gaze on. Paintings to make you feel better. Paintings to sooth the savage breast. This small picture can only hint at their beauty - if you can, do go and see the real thing!

Gorgeous indeed - thanks for this, Sue!

Enjoyed this post and would love to see the exhibition. Particularly liked the title "Avant-gardens". :)

Thanks for this. Almost as good as being there. Can't wait to see it. Hoping to go with linda Newbery but you beat me to the post, Sue.

I'm sure there's room for your thoughts as well as mine, Celia!

I can't wait to get to this exhibition - many thanks for this preview!

What a beautiful post - thank you, Sue! I'd love to see this exhibition - must find out how much longer it's on...

It's only just started - I think it's on till May.

You are quite right, Sue, this is a wonderful exhibition. I went in feeling frazzled (life, weather, deadlines, etc.) and I came out feeling as if I'd been on some magical journey and filled with serenity!