“If you would take a swarm of bees from a hollow tree. Saw off the top of the tree and cover the swarm with a cloth soaked in wet clay. Then saw through the tree beneath the swarm and carry it home. But it is best you do this swiftly.” – Advice given to Medieval Beekeepers.


This last line sounds particularly wise advice. Beekeeping was vital in the Middle Ages for the production of honey for use both in cooking and to preserve food, such as fruits. It was important in medicine too. It had been recognized since ancient times that honey helped to prevent wounds from festering, healed ulcers and helped internal ailments.

Beeswax was equally valuable for making the vast number of candles needed to light homes, workshops and churches. It was also needed to make polish to preserve wood and leather, for waterproofing and for sealing storage jars and documents. Bees also pollinated many food and forage crops. So, not only were bees kept in huge numbers in monasteries and manors, many medieval cottagers would have also have been beekeepers.


In the Middle Ages, it was believed that the hive was ruled by a king bee, not a queen, with a social structure that paralleled human society, with the monarch at the top. In Shakespeare’s “King Henry V”, the Archbishop of Canterbury describes this belief. This parallel between human society and that of the industrious bee was frequently alluded to in sermons, as proof of the divine and natural order, which no one should even think about rebelling against. Although, a number of people down through the centuries had claimed it was a queen not a king, who was centre of the hive, it wasn’t until the second half of the 17th century, that the Dutch naturalist, Jan Swammerdam, finally managed to get the idea generally accepted.

In Britain, bee skeps have been traditionally made from whatever people used for making byres and cottages. In areas where reeds were used for thatching houses, it was used for skeps. Where corn was grown, they used corn straw. Pallandius writing in the 4th century, recommended hives made from wood or woven from wicker, covered with daub, and insulated with wool and moss. Sticks were laid across inside the skep to give the bees something on which to build the comb, which, if the bees co-operated, made it easier to remove honeycomb at intervals throughout the season, without damaging the skep or colony. Pallandius also advocated putting out dishes of honey boiled in water, infused with rosemary in the early spring to feed them. We now know that rosemary has antiseptic properties which might well have helped the bees to fight disease.

Medieval beekeepers were advised to put sweet smelling herbs inside a new skep, together with castor (oil from beaver glands). This may not merely have soothed the bees into staying, but might also have helped to discourage mites which can weaken and kill bees.

The Normans introduced the stone ‘bee tower’ or ‘honey pot’. The Cistercian monastery at Mellifont had a 40 ft high bee tower. The one erected by Nicholas de Verdon in 1230, in Clonmore, County Louth was 50 ft high and 10 ft square. It had tiers of louver openings on three sides, but not on the north wall, with lofts lined with straw on each tier to keep the hives warm and a central ladder. 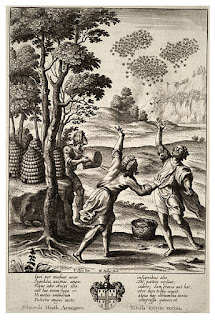 Medieval manuals give detailed instructions on capturing wild bee colonies. Someone wanting to restock his own hives from the wild was advised to go and sit by shallow water in a forest. If he saw a large numbers of bees, he caught some by sucking them up them in a hollow reed and then marked them by sticking small pieces of feathers or petals of different colours to them with wax. He was then instructed to release them and observe which bees came back to the water first. This was a sign their nest was the closest, so he could follow those. But in reality, I suspect most medieval country dwellers would not have bothered with anything so complex. They, or their children, would have spotted colonies of wild bees whilst driving pigs into the forest in autumn or collecting kindling, and would simply have marked the sites to return to in spring.

Up to a few decades ago, it was thought that medieval beekeepers were pretty wasteful with bees, killing off most of the hives to take the honey in autumn and replenishing them from wild sources or a stock hive in the spring. But we have come to realise that medieval beekeepers were just as careful to keep any healthy hives going over winter, as the modern beekeeper. They knew how to combine colonies with a weak ‘king’ to a stronger colony. And they claimed that by setting out troughs of ‘toasts of bread soaked in strong ale’ near the hives in March, a colony could thrive for ten years.

To separate honey from wax, the combs were broken inside sacks and the sacks hung up and left to drip, this produced the finest honey. The combs were then bruised and beaten in the sack and hung in a warm place, often in front of the fire, so that a lesser quality honey ran out. The final few drops of honey were extracted by pressing the combs in straw under heavy stones. Monasteries who had cheese or fruit presses would use those, but in cottages the family quern or grinding stone was often used as the weight. Afterwards, the straw was pressed into bundles while still wet and hardened into a waxy tapers or spills, which could be used to light fires or to smoke the bees, to stupefy them.


Medieval laws regard bees were very complex and often varied widely across the country. In Ireland, if a swarm from a known hive settled in the hollow trunk of neighbour’s tree. The produce in the first three years had to be divided, with two-thirds going to the person who owned the tree and a third to the owner of the hive from which they came. In the fourth year, the bees became the sole property of the tree-owner. But if the bees instead settled in branches of the tree, the proportions were reversed, with only a third going to the tree owner. However, rather unfairly, if the owner of the original hive was of humble birth, he was only entitled to a half of the produce, not two-thirds.

If some passing a hive got stung, providing he hadn’t struck the hive, under Irish law he was entitled to a full meal of honey, unless he killed the bee which stung him, then he got nothing as the crime had been avenged.

There are many ancient superstitions connected to bees, often originating in the belief that they were the messengers between earth and heaven. One is that bees must be informed of births or deaths in the family immediately, otherwise they will fly away. And even twenty-years ago, I remember an elderly relative going out to tell the bees about the death of her husband before she would utter a word to anyone.

LOVE LOVE LOVE this post! I am a great fan of bees and honey. In fact right now I'm making a wonderful ginger honey using about half a pd of Turkish honey to 1/2 as much spring water from a good source, and a big piece of raw peeled ginger in it. I'll let it set a week or more and then use as syrup on food, or straight tablespoon for a sore throat or an upset stomach.

As a child in early years at high school I was treated to a reading period every week by the head mistress, she was of a more mature age and read books she liked to us, one of which was The linnets and Valerians by ELizabeth Goodge https://www.goodreads.com/book/show/205616.Linnets_and_Valerians
in which the children of a family had adventures in a gentle Edwardian type world which included being very respectful of the bees, The phrase 'Go tell the bees.' took me back to the late 70's in an old building changed to a school with 20 foot ceilings, listening to the calm tones as the last bell drew closer, head on the desk, eyes almost closed, with the drone of the bees outside filling the gaps in the story.
Many years later as a new mum I watched from a safe distance as my oldest then about 5 or 6 got his first 'hands on' experience with his aunts hives.
A few years ago, we had the 'joy' of finding a wild hive had swarmed and ended up in the wall of the roof space and totally inaccessible as the wall is 2 foot stone and the roof is the highest corner. My cats have learnt not to snap as any buzzing things as they have all been stung as kittens, even sniffing is tentative. My garden is abuzz all summer, and as I have been told, were there's bees there won't be wasps, which has proven to be true for us.

I think I learned to be respectful of bees from 'Linnets and Valerians' too! Must re-read. Lovely post.

Fascinating! Especially that last fact about telling the bees about your dead... Thanks for posting!

Recently read, in a American HF fact-checking guide, that European settlers brought honey-bees to North America. Bees were not kept before then as the maple syrup harvest already supplied the sweetness. I feel I need to re-read the chapter and check it is as I understood it, but can't help wondering how those settlers could have transported bees comfortably across oceans.
Interesting post, Karen!

I remember reading about telling the bees in Linnets and Valerians, and much more recently, Terry Pratchett used it, too.

Did you see the story about the bee-friendly pinnacle in a Scottish chapel?http://news.bbc.co.uk/1/hi/scotland/8594724.stm