Imogen Robertson’s fascinating January blog about Cherubina de Gabriak, a disabled school teacher who tried to reinvent herself as a beautiful aristocrat and had a brief success as a poet, set me thinking about literary charlatans. Ossian was perhaps the greatest poet who never was. In the 1770s James Macpherson  published his ‘translation’ of an epic cycle of Scottish poems written in Scottish Gaelic in the third century. Ossian, a blind bard, sings of the life and battles of Fingal, a Scotch warrior. Macpherson claimed that Ossian was based on an ancient Gaelic manuscript but nobody ever saw the manuscript and, in fact,  there are no dark-age manuscripts of epic poems, tales, and chronicles and so on from Scotland because ancient Scottish poetry and lore were then purely oral. 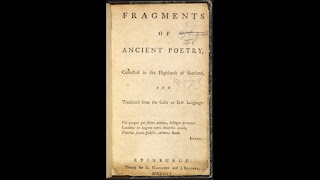 Whether the epic was genuine or not, Ossian caught the zeitgeist of a revolutionary, nationalistic  age.  When you’re reading about the eighteenth century Ossian pops up all the time: Napoleon carried a copy into battle; Goethe admired it and translated parts of it; the city of Selma, Alabama was named after the home of Fingal; Voltaire wrote parodies of the poems and Thomas Jefferson thought Ossian was "the greatest Poet that has ever existed".  His poems were considered equal to Homer’s and were tranlated into most European and Scandinavian languages. Writers as diverse as William Blake, Henry Thoreau, George Byron, Walter Scott, Elizabeth Barrett Browning and Matthew Arnold praised or imitated Ossian’s poems. 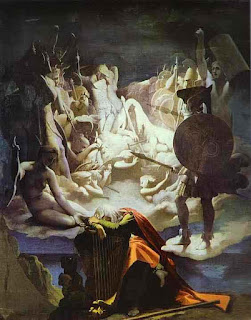 Napoleon commissioned one of Ingres' most romantic paintings, the Dream of Ossian, (shown here), and many other  painters, including Turner, Girodet, Angelica Kauffman and James Barry were also inspired by Ossian; the opera Ossian, ou les Bardes was a great success at the Paris Opera in 1804; Schubert composed Lieder setting many of Ossian's poems and In 1829 Mendelssohn composed the Hedrides Overture, better known as "Fingal's Cave". The cave itself, on the island of Staffa,was actually  renamed by Sir Joseph Banks at the height of Ossianmania (its original Gaelic name is "An Uamh Bhin" or  “the melodious cave"). Scandinavian and German princes were named Oscar after one of the characters in Ossian, as was Oscar Wilde
Various Irish historians, including Charles O’Conor, pointed out errors in chronology and in the forming of Gaelic names and challenged Macpherson to produce the original manuscripts, which he never did. Samuel Johnson was convinced the poems were forgeries, he  called Macpherson "a mountebank, a liar, and a fraud.” When he was asked, "But Doctor Johnson, do you really believe that any man today could write such poetry?" he famously replied, "Yes. Many men. Many women. And many children."
However, Macpherson flourished. He ended up as MP for Camelford and became rich enough to buy a  large estate in Invernessshire. His sentimentality about Gaelic culture didn’t prevent him from being a ruthless landlord when it came to the Highland Clearances. When he died in 1796  he was buried in Westminster Abbey ( a privilege he was said to have paid for), together with Chaucer, Shakespeare Spenser and Dryden.
Does each generation get the forgeries they deserve? Although I don’t know anyone who reads Ossian now Macpherson’s contemporaries certainly thought he was a great poet. So was he?   I’d love to know what you think about this. 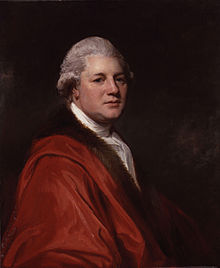 "Connal lay by the sound of the mountain-stream, beneath the aged tree. A stone, with its moss, supported his head. Shrill, through the heath of Lena, he heard the voice of night. At distance from the heroes he lay; the son of the sword feared no foe! The hero beheld, in his rest, a dark-red stream of fire rushing down from the hill. Crugal sat upon the beam, a chief who fell in fight. He fell by the hand of Swaran, striving in the battle of heroes. His face is like the beam of the setting moon. His robes are of the clouds of the hill. His eyes are two decaying flames."
http://www.poemhunter.com/poem/fingal-book-ii/#content

I think I'm with Dr Johnstone.

Interesting to know more about this Highland-clearing faker... I always thought Oscar Wilde was named after Finn MacCool's grandson!

Would this one have been such a bestseller if people had known it was written by a modern writer? The author obviously didn't think so. And as with many modern literary hoaxes - I think I'd call it tat rather than a forgery - I'm betting it had its defenders for a long time after. We all know about literary hoaxes. They still happen. I know of one that won a major award here because the author posed as something she wasn't, and that one had its defenders too.

Yes, Susan, it's banal stuff, isn't it? I agree with Sue that he gave people what they wanted and - ancient celtic ranting to match the growing mood of nationalism all over Europe. And once a forgery/hoax has been successful lots of people have a vested interest in insisting it's the real thing.

It's instructive to us all to consider how easy it is to be carried away by reputation and fashion. I wonder whether Goethe would have been so impressed if it had been written in German? If the quote Sue P has given us is typical, it does seem amazing, now, that he was so popular, yet tastes change. I have to say that I've never really enjoyed Goethe's Sufferings of Young Werther, and yet that was the punk rock of the nineteenth century; shocking, scary to the older generation, and devoured by the younger.. luckily (in my view) Goethe improved with experience.