Ladies of Quality and Distinction by Mary Hoffman

I was in Brunswick Square a couple of weeks ago, to visit an exhibition at the Foundling Museum. It told a story I knew nothing about. I had, of course, heard of Thomas Coram, its founder, but knew nothing of the struggle he had experienced in getting his philanthropic venture off the ground.

In the early 1700s, when Thomas Coram returned to England after eleven years in America, the London poor were in a bad way, especially their children. Mortality in the under-fives was running at 75%. it was even worse in the workhouses, where the rate was 90%. It was the time of the gin craze and many poor women who couldn't feed their children adequately gave this cheap spirit to them  to suppress their appetite, not realising the dangers. Thousands of children died from alcohol poisoning.

About a thousand children a year were abandoned in the streets by desperately poor families who couldn't provide for them. Illegitimacy also bore a stigma and many abandoned babies were those who had been born out of wedlock. And yet there was no provision in London for the care of such "foundlings."

In this way we lagged behind provision in Europe, where there was the Hopital des Enfants-Trouvés in Paris in the late 17th century. Italy was even better provided, having had the Ospedale degli Innocenti (designed by Brunellechi) in Florence since 1491 and the even earlier Conservatorio della Ruota in Rome in the 13th century. The "ruota" was the wheel, also used in Florence, in the wall of the building, where desperate women placed their babies and turned the handle to deliver them inside, into the care of nuns.

In Britain, there was a fear that having somewhere to leave the results would encourage extra-marital or pre-marital sex.

Into this scene stepped Thomas Coram, a man of such determination that he spent seventeen years getting the Foundling Hospital up and running.
Born to a humble family in Lyme Regis, Thomas Coram went to sea and ended up in Boston in  America as a shipbuilder. He was evident a blunt and outspoken man, who made enemies in America, and eventually returned to his native country. He continued to do well as a shipbuilder and became quite wealthy. But he was appalled at the situation of abandoned children in London and the absence of any provision for them. He had no children of his own but was determined to do something to look after the unfortunate offspring of others.

To establish a foundling hospital, he had to get a Charter of Incorporation from the king but he had no idea how to secure one. So he decided to start a petition and made extensive lists in his pocket book of the names of all the  churchmen, nobles and other dignitaries he could think of. Then he tramped the streets of London trying to get these influential people's support. This was to little avail.

Coram decided on a another approach: he would approach the women, the wives of the great and the good, and appeal to their compassion. The first woman to sign his petition was Charlotte, the Duchess of Somerset in 1729, the first of eventually twenty-one "Ladies of Quality and Disctinction" to do so. That's her, on the left, below: 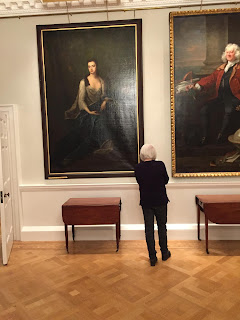 Where one noble lady led, others followed. The exhibition currently at the Foundling Museum, shows portraits or copies or photographs of paintings of all twenty-one, because women of their rank would have sat to have their images preserved. Some paintings show them with their families, some alone. Here is Selina, Countess of Huntingdon, who signed in 1730, with her husband, the Earl, and their children Selina and Henry. 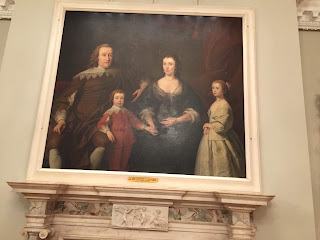 Many of these women were remarkable in their own right. Countess Selina, for example, in 1737, leading a group of titled women, broke into the House of Commons gallery and shouted comments, after they had been excluded from a debate on Spain.

Each "lady" has her own story and I recommend visiting the exhibition to explore them all.

When they had all signed, the petition was presented to the king in 1735 and there followed two years of gentle persuasion of husbands and kinsmen, until a second petition was presented, of "Noblemen and Gentlemen," which included "25 dukes, 31 earls, 26 members of the peerage and38 knights, along with the entire Privy Council, which included the Prince of Wales, the Prime Minister, the Speaker of the House of Commons andthe Justices of the Peace, 375 signatures in total."

Such a plea could not be ignored and, in 1739, King George ll signed the charter and the Foundling Hospital had its green light. Thomas Coram, now 70 years old, presented it to the Duke of Bedford, who was made its first President. 172 men from the age of 21 to 80, were appointed its first governors. (Anyone who donated £50 was eligible).

Now all they had to do was raise the money. A committee of 50 governors was chosen by lot and they met every two weeks to discuss fund-raising and other matters. In 1740 a lease was taken on a house in Hatton Garden, to provide a home for sixty children. But it wasn't until 1753 that permanent premises opened, with half the cost of building (£2,000) donated by the king. 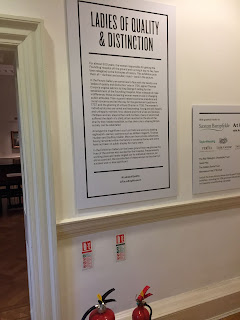 From 1742-55 there was an admission system of lottery, using coloured balls. This was becaiuse there were always more babies that places. A white ball meant a definite admission subject to medical examination, a black ball meant there was definitely no place for the child and a red ball meant a reserve place if any of the accepted children failed the medical.

Every child came with a token from its mother, which could be as simple as a piece of cloth, in the event that a child might be taken back at a later date when the parents could afford to support it. Infants were taken into the country to foster mothers until they were four years old. One of the inspectors of these foster-homes was the artist William Hogarth.

He was one of the original governors of the Foundling Hospital and he and his wife Jan, although childless themselves, fostered several foundlings themselves. He donated his portrait of Thomas Coram to the hospital.

Coram himself was chucked off the committee within a year. He was obviously no easier to get along with than he had been in America. But obstinacy can be a good quality, as his perseverance shows.

But he couldn't have succeeded without the support of his Ladies of Quality and Distinction. Some were happily married, like Elizabeth, Countess of Cardigan, whose husband wrote he was "the happiest man in the whole world by being married last Thursday to my Lady Betty Bruce." They had six children, two of whom are in this painting:

Others were not so lucky, like Anne, Duchess of Bedford, whose first husband was the "intellectually weak" seventeen-year-old 3rd Duke of Bedford. Anne, the granddaughter of Sarah Churchill, the uchess of Marlborough, was six years older than her pathetic teenage husband, who didn't fancy her and wouldn't perform his marital duties. He was also gambling away hisfamily fortune.

Grandma stepped in and suggested he might travel abroad, where he conveniently died in his early twenties. Anne swapped her title for the lesser one of Countess of Jersey a year later and had a happy second marriage. She signed the petition while her first husband was still alive.

It was a story I knew nothing about, all these duchesses and countesses, who lent their names to the great venture that was to become the Foundling Hospital and rescue so many children, although of course many more were lost. Not only did it help the ones who were fortunate in the lottery but it helped to change society's view of illegitimacy.

(And the Hospital inspired two great children's books: Jamila Gavin's Coram Boy (2000), which won the Whitbread Prize and Jacqueline Wilson's Hetty Feather, which was turned into  TV series in 2015)


Many thanks to volunteer Jane King for showing us around the museum.

With acknowledgmentsto the exhibition brochure and The Foundling Museum: an Introduction by Caro Howell et.al. (2014)

(Images by author and Wikimedia Commons)
Posted by Mary Hoffman at 00:01