Mary and Jesus as refugees by Janie Hampton

Once Christmas Day is over, we tend to forget about the small family in a stable in Bethlehem, and what they did next. I’ve been wondering about Mary, and how she coped as a new young mother, in a strange town, with no home or family. We only know what the gospels of Luke and Matthew chose to write about the birth and first weeks of Jesus' life. Matthew tells us that Mary was a virgin, but Joseph her ‘espoused’ learned that she was pregnant, and not by him. An angel told him not to worry, because ‘that which is conceived in her is of the Holy Ghost.’ So he agreed to marry her, and Jesus was born in Bethlehem. That’s all he has to say about the Nativity.

Luke gives much more detail. Joseph and Mary had to travel to Bethlehem for a Roman taxation census. While in Bethlehem, Mary ‘brought forth her firstborn son, and wrapped him in swaddling clothes, and laid him in a manger; because there was no room in the inn.’ Shepherds and wise men came to worship him, and when Jesus was eight days old he was circumcised according to Jewish law. Meanwhile Mary stayed indoors for 40 days until ‘the days of her purification according to the law of Moses were accomplished.’ Then they went to Jerusalem on their way north, where they offered a sacrifice of two turtledoves. After that Jesus ‘grew and waxed strong in spirit’ back at home in Nazareth.
Both accounts were written over 60 years after the events, and by men, so there is no mention of the things women might be interested in. How long was the labour? Did it start while they were travelling the 80 miles from Nazareth to Bethlehem? The journey would have taken them at least four days on foot. As a carpenter, Joseph could well have owned a donkey for carrying his tools and timber. Christmas cards often depict Mary on a donkey out of sympathy for her predicament as a full-term primigravida, though she might have walked all the way.
As Joseph came originally from Bethlehem, he probably had relatives living there. Joseph’s mother, sister or an aunt may have accompanied Mary through her labour, cut the umbilical cord and disposed of the placenta. Jesus was then ‘laid in a manger’ - a net or wooden box containing hay for cattle – a prickly place for a baby! A manger (from the French word ‘to eat’) can be attached to a wall, a practical way of keeping a new-born baby safe from dogs and draughts while Mary was sleeping.
Bethlehem is at a high altitude and it could have been very cold, so Mary would have kept her new baby close to her body most of the time. We don’t know if they stayed in the stable for the 40 days Mary had to wait for her purification, a time of post-partum bleeding, or lochia. Hopefully, Joseph’s female relatives provided Mary with the necessary cloths which she then washed, and hung up to dry?
Matthew next tells of wise men from the East who visited the new baby, and warned his parents to return home by a different route, as King Herod wanted to kill the baby. Sometime after they returned to Nazareth, Joseph was warned in a dream to take the child to safety in Egypt. They left immediately by night, becoming refugees.
Matthew’s account does not say when they had to flee to Egypt, but King Herod had ordered all boys under two years old to be slaughtered – indicating Jesus must have been about 20 months.

They probably took the Via Maris – a well-trodden trade route along the coast of the Mediterranean Sea, that ran from Damascus to Memphis in Egypt. The journey from Nazareth to Abu Serghis, on the far side of the River Nile where tradition has it they settled, is about 500 miles. Google Map estimates this takes 150 hours to walk. So if the family kept up a pace of 8 hours a day, that would have taken them three weeks without breaks. Jesus would have been carried much of the way, breastfed every few hours; and Mary may well have had a menstrual period en route. Imagine her discomfort while walking or sitting on a donkey, with just cloth rags. There are many mediaeval and renaissance paintings of Mary breastfeeding Jesus. She is shown with a bounteous supply of milk and fullsome breasts, and Jesus is a well-fed chubby boy.
‘The Rest on the Flight into Egypt’ became a common depiction in the life of Christ after the 14th century. As interest in landscape painting increased, the subject became even more popular and the figures were often shown in European scenery.  The paintings are lovely but the conditions would have been much harsher in AD 2, with the risk of bandits as well as desert conditions of starvation, heat and cold. Until recently few historians have thought about how women dealt with menstruation in ordinary life, let alone as refugees, or women in the Bible. What was it really like? To recapture this experience, we can look at female refugees fleeing from war now. The testimony of the two women in this film, made in a refugee camp in Malawi two months ago, gives us an insight. Alphonsine and Pendeza are both Christians, but almost certainly unaware that their unintended journeys across Africa were similar to Mary’s 2000 years ago. I hope that they, like she was, are able to return to their homes one day soon. 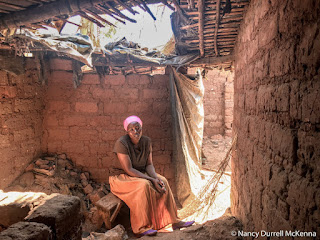 
All quotes are from the King James Bible, published in English in 1611.