THE GHOSTS WITHIN A CHRISTMAS CAROL by Penny Dolan

Charles Dickens' A Christmas Carol, In Prose. A Ghost Story of Christmas  was written in a single six-week burst of energy and, unusually at that time, appeared as one single volume. 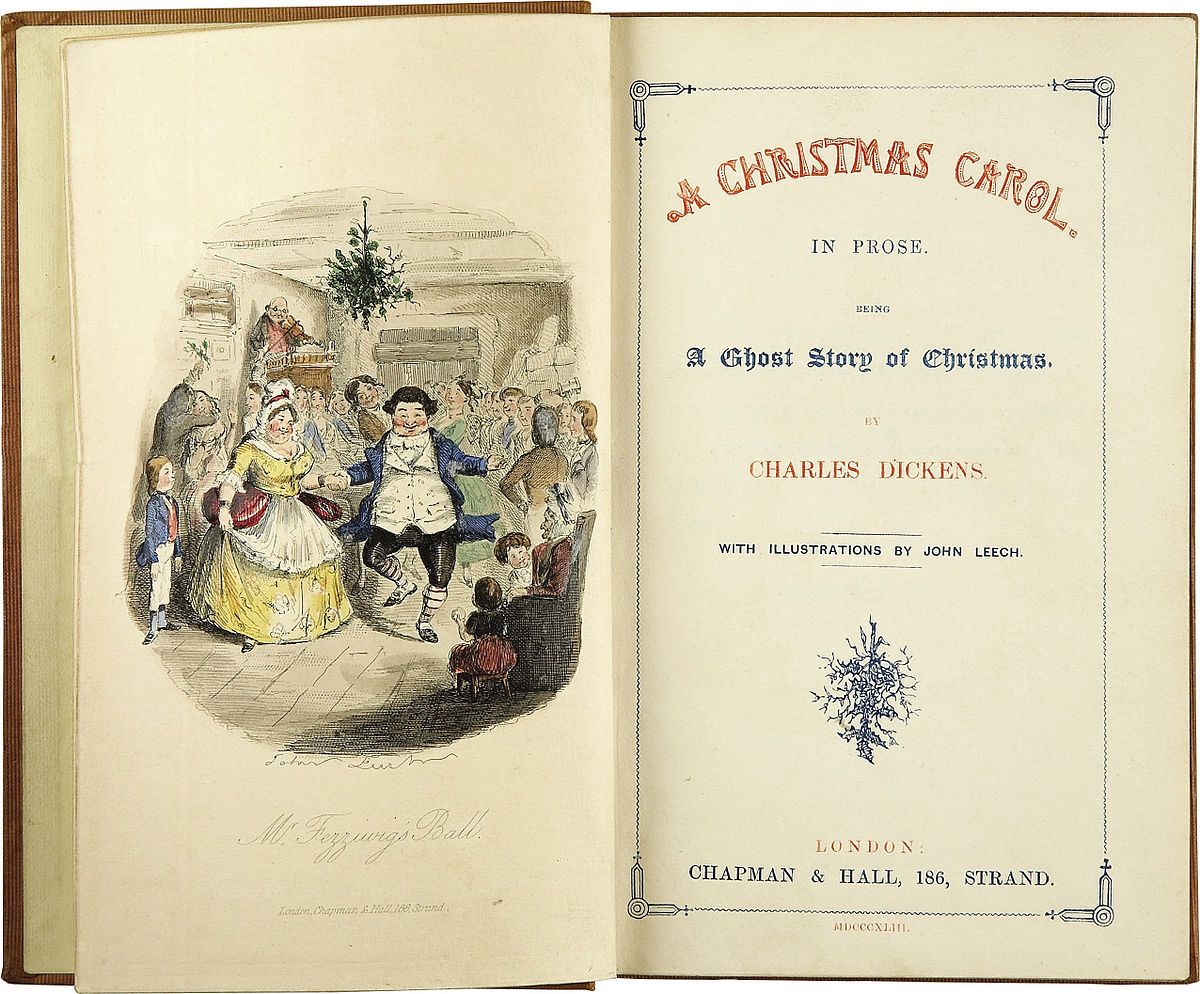 Up until that point, Dickens had worked in serial form, writing sections at a time, planning almost as the chapter before appeared in print.

Even as he scribbled away, bringing Scrooge into life, he was struggling with Martin Chuzzlewit, his American novel, and with fears about his own popularity as an author.

Dickens wanted A Christmas Carol to be seen as his book.

He commissioned Chapman & Hall as his publishers and then chose the look of his new book. He wanted a handsome red cloth binding and a gold design on the cover while the gilt-edged pages would include four black-and-white woodcuts set within the text itself and four full-colour etchings by the artist John Leech.

A Christmas Carol was published on 19th December 1843, reasonably priced at five shillings, and became the most popular book of the season.  By Christmas Eve, every one of the six thousand copies had been sold.  Dickens must have been delighted.
The novella quickly became a “national benefit”, according to Thackeray and, with its outspoken attack upon those who ignore the poorest in society, was seen as a piece of radical literature. Yet, at the same time, the story also celebrates family and food and fun alongside the Christian themes of mercy and love.

The story certainly feels haunted, in more ways than one. Even before their appearance in his story, Dickens recognised those two awful children, Ignorance and Want. He had become a friend of Miss Burdett-Coutts, a rich philanthropist with a deep purse, and so had been visiting Ragged Schools - schools set up by Evangelicals to save souls - so he could make practical suggestions to guide her charitable work.

However, when Dickens visited the Field Lane Ragged School, he had to walk through Saffron Hill, an area of London which had haunted him since his childhood: he had used it for some of the scenes with Fagin in Oliver Twist.

Once inside the school, Dickens found “a sickening atmosphere, in the midst of taint and dirt and pestilence, with all the deadly sins let loose and howling at the doors”. His companion left hastily while the unruly children, for their part, mocked Dickens stylish white trousers and bright boots.

Just as awful was the knowledge that Field Lane school was close to where he, as a boy, worked in a blacking factory. Dickens had been sent there by his bankrupt father, while his sister was sent to music lessons. The young Dickens was utterly ashamed of his fall from respectability, especially when he was placed in public view in the window, a disgrace that he felt so deeply that he kept it secret until almost the end of his life.

Revisiting the area, witnessing again all the filth, disease and vice of that “doomed childhood”, and the hopeless sense of destitution must surely have fed into the darkness of his Christmas Carol.

Dickens brought jollity to the story, of course. He was someone who loved parties and celebrations and surprises and plays and conjuring tricks and the playful side of his character is very much there in the joyful scenes and resolution of A Christmas Carol.

Yet even the plenty is ambiguous. Dickens, the self-made man, knew that it was his pen that brought in the good things that he and his extended family enjoyed and the money they spent.

Yet, a little like Scrooge, Dickens was a man for whom money and time were almost everything. He was cautious about his household expenditure, and spent phenomenal time and energy visiting or lecturing or going on long night-walks where he plotted his stories. Dickens, like many who have known poverty, was haunted by the fact that he had to be successful.

Furthermore, his worries were increasing: his wife was about to have another baby, another child that he had to keep fed and clothed and out of the gutter. Dickens enjoyed being with children, although very noticeably on his own terms, but he was worried about the cost of them. At the same time, he was growing far less fond of his poor, low-spirited wife Catherine and rather more sentimental about pretty young ladies that reminded him of his youth.

Scrooge’s memories of his own childhood echo those of his creator: does his miser draw on the ambivalence and shadow within Dickens?

Sadly, within two weeks of publication, Dickens had reason to feel even more ungenerous and suspicious. A simplified version of A Christmas Carol was issued by a pirate publisher and though Dickens immediately sued and won the case, the publisher also immediately declared bankruptcy and Dickens was forced to pay the court costs himself and felt he had been almost ruined by the whole venture. Moreover, errors in production costs meant that Dickens made hardly any money from that first beautiful edition. God Bless Us Everyone indeed!

Six years afterwards, however, in 1849, Dickens started to give public readings of A Christmas Carol. These proved so richly popular and rewarding that Dickens kept telling his strange, enigmatic Christmas ghost story until his own death, performing at the Bradford Alhambra, in 1870.

And, probably, if you look around locally, someone will be continuing that same tradition, and reading Dickens Christmas Carol this winter too – a tale that’s still, sadly, just as apt for our own age.

A Happy Christmas to you all.

Note: In this post, I’ve drawn on my own reading of Peter Ackroyd’s impressive biography of DICKENS, first published in 1990.

As a matter of fact, yes, I do know someone who does the Dickens-one-man-Christmas Carol, an old schoolfriend of mine. I saw him perform it brilliantly a few years ago. Problem is, it's summer here at Christmas and he was wearing heavy Victorian costume in a tent outside the Melbourne Arts Centre. It was rather too warm in there, but he did an amazing job.

They have a first edition of A Christmas Carol on show at the SS Great Britain at the moment - will send you a picture.

I do like your account of that bold fellow, Sue B. That reading must be a strangely over-heated experience for him and for his audience. Hooray for him - a good way to celebrate the season! Oh, I've now spotted that Simon Callow's C.C. reading is being shown again on tv here.

Thank you, Sue P. (I'm intending to put SS GB into my travel plans for next year.)

Loved this, Penny. A Christmas Carol is one of the few things by Dickens I've read but I didn't know much of the background. I'm surprised that Dickens, the son, was sent out to work while his sister had music lessons - was it hoped to marry the sister off profitably if she was taught the usual accomplishments?

I wonder if some of Dickens' shame about the blacking family was a feeling of abandonment by his family, that he was thrown out while his sister was protected.

Dickens was very complicated, both as boy and as a man. His father was the model for Mr Micawber and his lack of concern for his son during yet another impecunious period certainly marked Charles for life. I, too, am sure the piano lessons were intended to improve his sister's chances(and income/marriage opportunities)but Charles certainly felt unjustly abandoned and cast out of the family circle.

Interesting how life was much more grey and not so black and white for Dickens, always felt A Christmas Carole was a tale of how you should be, more 'do what I say, than what I do' type of story, but never knew how his own life was so hard at the same time. His own hidden and not mentioned past colours so much of his writing, I love reading Dickens at any time of the year but traditionally I read the dark is rising in the run-up to Christmas by Susan Cooper.