Under the Volcano - by Lesley Downer 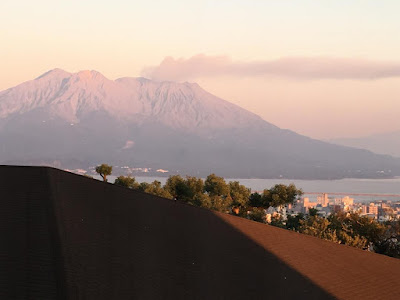 On August 11th 1863 seven British warships steamed into Kinko Bay in the southern Japanese province of Satsuma and dropped anchor in the shadow of the great volcano, Sakurajima, draped, then as now, with a plume of black ash.

The British crew and marines and legation officers on board were some of the first westerners ever to see the beautiful bay with its fringe of palm trees, balmy blue skies and precipitous hills soaring behind. I was there just last month and found myself trying to imagine how they must have felt as they saw this scene which has changed surprisingly little in the last 155 years. Later visitors called it the Naples of Japan.

But the British hadn’t come to sightsee. They’d come to attack the city of Kagoshima on the opposite shore.

In those days Japan was made up of two hundred and sixty princedoms, each ruled by a daimyo lord, much like the earls and barons of Elizabeth I’s day. The Satsuma domain, in the far south, was so far from the capital, Edo, that it felt like another country. To this day the people of the area still think of themselves not so much as Japanese but Satsuma. The old clan loyalties remain.

The Prince of Satsuma was one of the wealthiest and most powerful in the land. Besides his imposing castle set against a dramatic hillside covered in dense forest, he had an exquisite seaside villa surrounded by pleasure gardens, overlooking the bay.

But the lord who had brought the domain to its pinnacle had died five years before the British arrived. Shimazu Nariakira, a brilliant and wise man, was fascinated by Dutch knowledge, the only western knowledge available in Japan at the time. He spoke Dutch, met the Dutch scholars who spent time in Japan, collected western books, studied western technology, and even kept a diary written in the Roman alphabet. He had a telegraph system, the only one in Japan, installed in his castle grounds, and owned Japan’s first camera, a daguerreotype, bought in 1853 in Nagasaki. The first photograph to be taken in Japan was of his castle and the first photographic portrait was of him.

He also established Japan’s first glass works which produced beautiful red and blue Satsuma cut glass. And he had built a whole industrial complex under the cliffs down by the bay, looking across to the volcano. There he had a foundry and the first reverberating furnace in Japan where he cast cannon. He also had a secret shipbuilding yard on the lower slopes of the volcano where he built his own warships in defiance of the shogunal decree forbidding such activity because he anticipated western attack and wanted to be ready.

But this great and enlightened lord had no surviving children and when he died was succeeded by the young son of his ruthless and unscrupulous half brother, Hisamitsu, who thereafter held the reins of power.

When the British sailed into Kinko Bay it was ten years after Commodore Perry had appeared in Edo Bay with his four Black Ships to force Japan to open to the west. So the people of Kagoshima had certainly heard of these monstrous ships even if they hadn’t seen them. All the same it must have been an awe-inspiring sight - seven mammoth warships, fifteen times bigger than the largest Japanese ship, steaming into the bay in a long line, bristling with cannon..

First the British seized three merchant ships and pillaged them. But the people of Satsuma were not easily frightened. Hearing the British were on their way they set up gun emplacements all along the seafront and turned the cannons, cast in the late lord Shimazu Nariakira’s iron foundry, on the British ships.

They also knew there was a typhoon coming and that it would cause havoc for the British ships. The British were taken by surprise. They'd seen themselves as administering punishment to unruly natives; they didn’t expect the Satsuma to fight back. It took them a couple of hours to regroup. Then they sailed along the coast bombarding the city.

The reason for the attack was the death of a British merchant, killed the previous year by samurai of the Satsuma domain. Charles Richardson, a British merchant from Shanghai, had been visiting Yokohama for a few days and wanted to go riding. He’d been warned not to go on the highway because there was a huge procession coming through. But he ignored the advice. After all, he was British.

He and three friends were on the Tokaido highway riding towards Edo. At Namamugi village they met Hisamitsu himself, Nariakira's haughty half brother, heading straight towards them at the centre of a huge procession with an escort of a thousand retainers. The procession was a mile long. It filled the entire road, from one side to the other. Like Trooping the Colour, it didn’t do to barge into it. When such a procession passed, Japanese fell to their knees and bowed their heads. An American merchant, Eugene Van Reed, meeting this same procession did the same, to the disgust of the foreign community. But at least he managed to keep his head.

Richardson refused to dismount. He rode down the middle of road and came between Hisamitsu’s palanquin and his bodyguards - like getting right up close to the queen’s carriage at Trooping the Colour. The bodyguards cut him down.

The British were outraged. The death of an Englishman was an unforgivable offence. They demanded that the shogun’s government pay a huge indemnity of £100,000, more than £10 million today, and 1/3 of the Japanese government’s annual revenues, enough to bankrupt the shogunate. They threatened to bombard Edo if payment was not made. They also demanded that the offending clan, the Satsuma, arrest the perpetrators and pay £25,000 compensation, nearly £3 million today.


The shogunate paid up but Satsuma refused. The British waited a year and eventually sent seven ships from Yokohama to attack Kagoshima.

In the end Kagoshima burnt down and many beautiful buildings and treasures were lost. However the city had already been evacuated and only 5 Japanese were killed as opposed to 11 British.

To the British it was just another small war, a very long way away. Probably very few British people ever even heard of it. This was an era when Britain was waging wars and taking colonies all over the globe. It was not long after the Crimean War in which Britain along with France and the Ottoman Empire had defeated Russia while in China the Second Opium War had only recently come to an end. Britannia definitively ruled the waves. But in the annals of Satsuma it looms large as the Anglo Satsuma War.

The long term result was that Satsuma recognised the superior fire power of Britain and wooed the British who were impressed in their turn by the spirit of the Satsuma. They ended up backing them against the shogunate and, as usually happened in those days, the side the British backed won.

Lesley Downer’s latest novel, The Shogun’s Queen, is the epic tale of Princess Atsu, Shimazu Nariakira's adopted daughter, whom he sent to Edo to marry the shogun. Out now in paperback.

The pictures of Kagoshima Castle, the bombardment of Kagoshima and Charles Richardson at Namamugi are courtesy of Wikimedia Commons. The rest are mine.
Posted by Lesley Downer at 00:30