My latest research has been into the German Occupation of Jersey during WW2. At first, the surrender by the British and the occupation by the Germans was polite, and the aim by both sides was to make as little disruption as possible, but inevitably as time progressed, relationships between the German occupiers and British citizens began to break down, leading to many reports of trauma and atrocity.

One of the things that caused fear and distress on the island of Jersey was the treatment of the forced labourers of Oganisation Todt. Named for its founder, Fritz Todt, an engineer and senior Nazi, Organisation Todt was a civil and military engineering confederation responsible for building infrastructure such as defence works and railways.

Hitler saw The Channel Islands as key to the control of Europe and Great Britain. With this in mind, he became obsessed with the idea that The Channel Islands should not be lost, and became determined to defend them, with the idea that eventually, after Europe was defeated, they would become the ideal base for Nazi families to enjoy holidays in a 'Strength through Joy' (Kraft Durch Freude) Camp. Worryingly, when I searched for more about the KDF, I found it still exists, and has branches in the North of England. Here is a typical Propaganda poster, the only one I could find not emblazoned with swastikas. 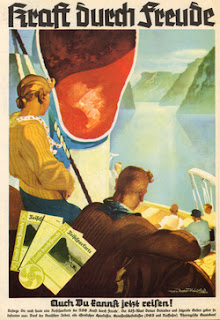 In order to defend the islands a massive programme of fortification began, and the Organisation Todt provided the labour. This obsession with Jersey was seen by many Germans as Hitlers inselwahn - island madness. Before Hitler's supposed final victory, the islands were to be a stronghold and submarine base for forays into English waters.

For those living on the island, they had to endure the appearance of nearly 500,000 metres of reinforced concrete to make anti tank walls, gun emplacements, underground barracks and bolt holes. Historic castles were fortified with concrete, and new roads cut through the previously quiet lanes to carry truckloads of building materials, plus the many workers needed for this enormous enterprise. To prevent landing by sea, the beaches were mined by more than 100,000 mines. 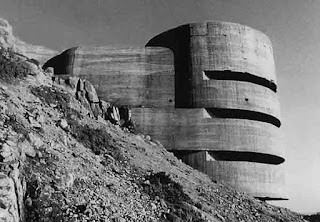 The workers for this frenzy of building were imported labourers and prisoners of war from Russia, Poland and the Ukraine. According to Nazi propaganda, the Slav races were untermenschen and treated as slaves to the Nazi building machine.

To house the workers,  camps known as lagers were constructed in several places, all named after famous German poilots such as ‘Richthofen’ and ‘Immelmann’. The treatment of the workers was appalling, and most were on inadequate rations because the food was progressively stolen by German employees and guards - either for their own use, or for sale on the black market. The lorry that brought the inadequate soup to the quarries and construction sites, also took away the corpses of those who had died from malnutrition, cold, exhaustion or disease. 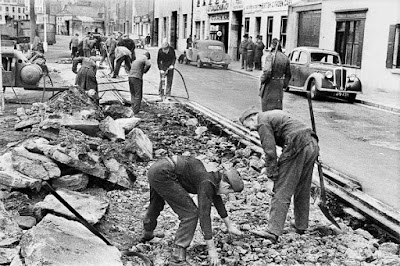 Jersey people were suddenly reminded through these atrocities, that their occupying force could treat pepople in this barbaric way, and this made the constant fear of the occupation much worse. The Germans shot workers caught stealing potatoes from the fields. Suddenly, their Germman neighbours seemed much less civilized when the treatment of their 'slaves' was exposed. Civilians were warned of the penalties for giving the workers food, but a number of Jersey people did try to rescue them, taking them into their homes at great risk to themselves.

According to 'The IslandWiki' - the Channel Island Website, German records show that by May 1943 there was a total of 16,000 foreign workers in Jersey, Guernsey and Alderney. In November of the same year, numbers had halved to 8,959 and by July 1944 only 817 remained. 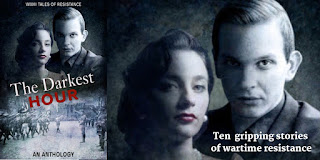 Workers from Organisation Todt feature in one of the stories in a new collaboration by writers fron many countries - all proceeds are in aid of the United States Holocaust Memorial Museum. The stories focus on the theme of Resistance, and the collection of ten novellas is available now.

More about the stories here