Fashion On The Ration - Celia Rees 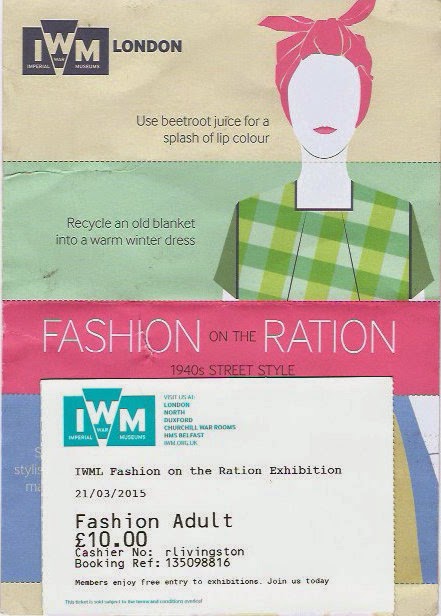 I recently visited the Fashion On The Ration Exhibition at the Imperial War Museum with my daughter, Catrin. We both have an interest in 1940's fashion and the exhibition did not disappoint. It gives a comprehensive insight into not only what men and women were wearing but the constraints and changes that total warfare brought to all aspects of everyday life. We think we know a lot about life in the War but as Julie Summers warns in the accompanying volume to the Exhibition, Fashion On The Ration,

'How we see clothing in wartime Britain is shaped by our knowledge in hindsight of the whole war and the austerity that followed it ... Far from being a story of drabness and misery, it is a story of colour inventiveness and determination to carry on regardless of the shortages and constraints of the coupon culture.'

There is something important in the above quotation: for writers of historical fiction, hindsight can be a dangerous thing.

The changes to dress that occurred were dictated by necessity. Conscription meant enormous numbers of men and women in uniform. The increased demand for uniforms put huge pressure on the textile and clothing industries as raw materials and labour were directed away from civilian production. This affected fashion. Out went pleats, coats and dresses that used yards of fabric, in came close fitting suits (costumes), simple dresses and military style coats. This was not just a material saving exercise,  it became part of fashion itself, the cut and style of clothes influenced by the now ubiquitous uniform. 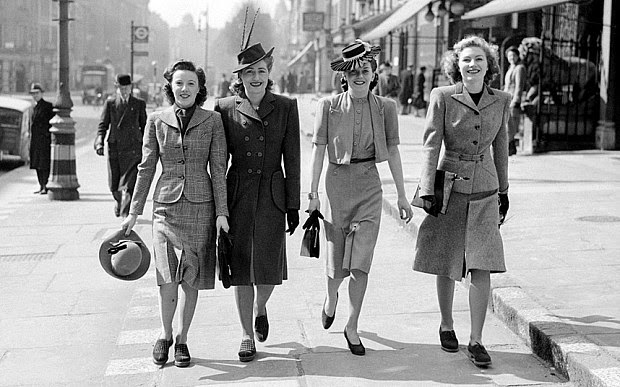 By 1941, the pressure on materials and labour resulted in the imposition of clothes rationing. A points system was introduced: eleven coupons for a dress, two for a pair of stockings, eight coupons for a man's shirt or pair of trousers, and so on. Every adult was allocated 66 points for the year. The clothes still had to be bought however, the coupons handed over with the money, and not everyone could afford 14 & 1/2 guineas for the military style suit shown here (£657.90p in today's money - Vogue doesn't change much). 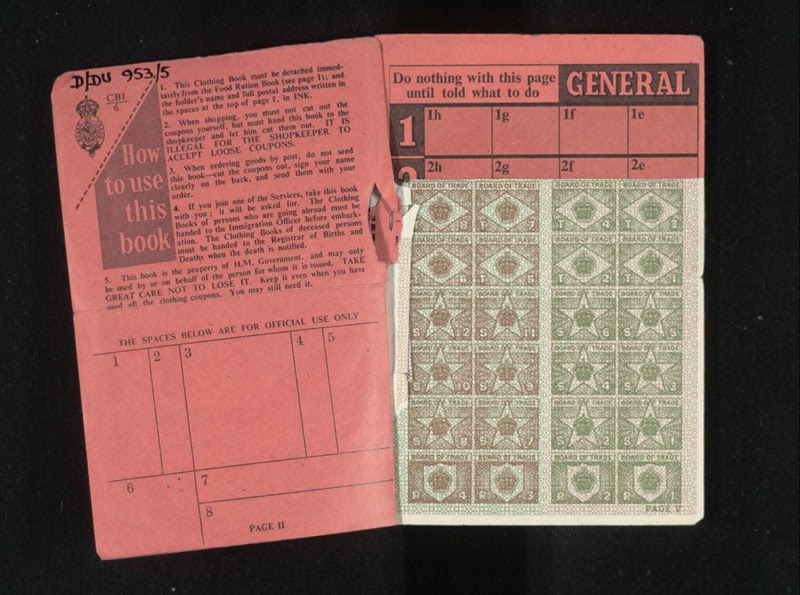 It soon became clear that while the rich could have well made, stylish clothing made out of good quality material, the poor would have to make do with something far shoddier but shoddy clothes would wear out quickly, replacements would have to be bought, taking up more coupons, material and labour, which was neither fair nor good for the war effort. Something had to be done. In 1942, the government introduced the Utility clothing scheme, offering a range of well-designed, quality and price-controlled clothes affordable by all. Strictly specified Utility fabrics and clothes made from these materials, guaranteed quality and value for money and coupons. The Utility clothing scheme also meant that the government could standardise production, which aided the war effort.


Not everyone could afford new clothes and clothing coupons had to be carefully hoarded. As the war went on, the number of points allocated shrank and had to be used for the whole family. The women of Britain could not be completely dependent on a hard pressed textile and clothing industry, they had to start doing it for themselves. Unlike these days, nearly all women then could sew and most had a sewing machine, or at least access to one, so one of the great contributions to the war effort was Make Do and Mend. 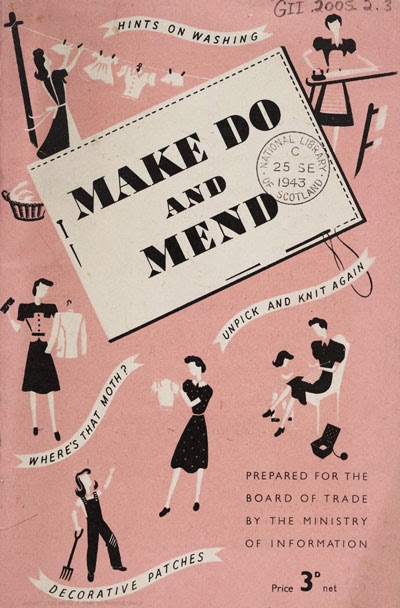 Skirts, dresses, coats cut in more generous pre-war times were cut up and re-modelled. Worn out clothes were patched, darned, frayed collars and cuffs turned and when repair was no longer possible, cut up and used as patchwork. Make Do and Mend allowed women to be inventive and creative in their use of what was available to them. Embroidery and appliqué, not only covered darns, but gave old garments a bright new look. New materials were pillaged. Parachute silk was used for everything from wedding dresses to camiknickers. One group of women in a village near Redditch confronted a downed German pilot with pitchforks and broom handles, intent on getting his parachute which supplied enough silk to make knickers for all the women in the village.

The silk escape maps issued to RAF pilots were begged from boyfriends and husbands to turn into scarfs.

Many women were in uniform themselves and wore those uniforms with pride. Wearing that uniform and doing the job that went with it, did not make women less feminine, rather it made them feel smart, independent, responsible and powerful. Equal to men. After all, they were often engaged in the same activities. Even so, there was a concern that women should not let feminine standards slip for their own morale and for the morale of the nation's men folk. Makeup was never rationed and continued to be manufactured. Coty made face powder as well as army foot powder and helpful tips were given out about how to make lipstick go further by melting stubs together, or using beetroot juice as a substitute (I can't help feeling a man might have made up the last suggestion (or even the first)). 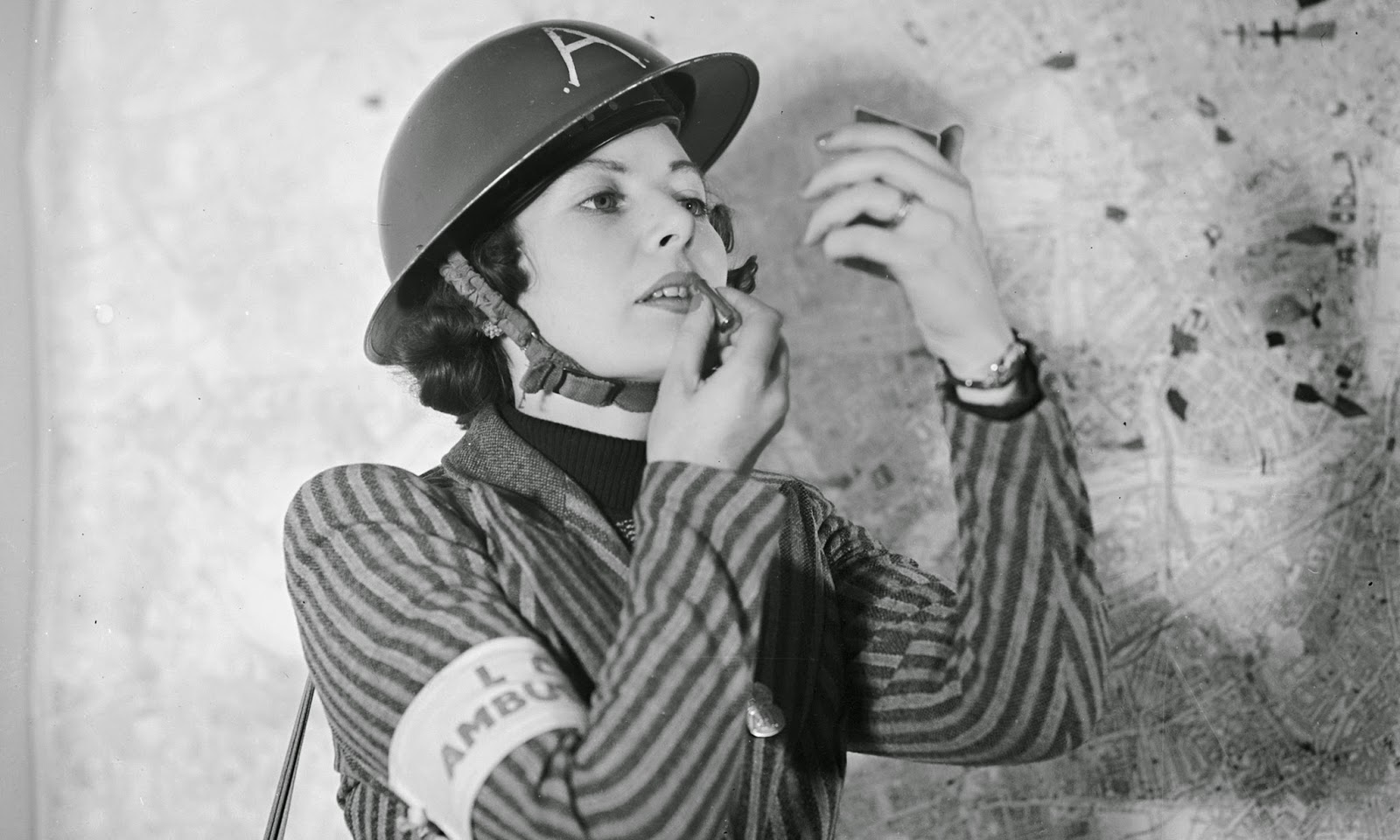 Some of the most powerful images of the time show women in uniform, going about their duties, or dressed for the practical work that they had to do. Rather than de-feminise them, these images show just how important women were to the war effort, and how important they knew themselves to be. The images below were made by women (war artist Laura Knight, photojournalist Lee Miller). They show women in uniform and overalls, helmets and fire masks. Women who don't need lipstick and boot black mascara to bring out their beauty. These are our mothers, grandmothers and great grandmothers, who were young once and brave and powerful and to whom we owe a very great debt.

It's interesting to take a look at primary sources for this sort of thing. I have downloaded some of the National Library of Australia's collection of Australian Women's Weeklies from the war years and before. You can look at the fashions both on the cover and inside and there are articles about how to make the most of your ration book for meals and such.

It's fascinating what can affect fashion. I remember hearing once that clothes in the Renaissance were more complicated than Mediaeval ones because, among other things, merchants with narrow bolts of fabric convinced buyers that it was all the rage where they came from. ;-)

I grew up fascinated by wartime Make Do and Mend because my mum and grandma had saved all their sewing and knitting books from the era (I still have them) - and even some of the clothes, which I altered to suit me! My favourite was made from something seemingly NOT mentioned in the exhibition - a viscose-like material 'Macclesfield silk' bought on the black market!
My mother worked in an armaments factory and tells horrific tales of the accidents there - fingers lost while trying to make confetti with a hole punch designed for sheet metal, someone scalped by catching hair in a machine - the factory worker above would have been told off for having hair out of her cap!

I hadn't seen that this exhibition was on so thanks for highlighting it. Also, I hadn't realised that "Utility" was such a widely imposed standard, as I'd only heard the term used for a furniture style. Interesting post.

I went to a purse history exhibit (in the States) a few months ago and learned that our satchel/over-the-shoulder purses became popular because of the satchels that WWII military women used.

It was a fascinating exhibition. Not enough room in one post to mention everything - like the regulations on factory workers maryom mentions, women not tying up their hair properly and suffering horrific accidents. The other thing I didn't have space for is the blackmarket. A fascinating subject in itself. I wish the IWM would do an exhibition around that!

That German pilot must have been terrified, then bewildered as he saw those women approaching him to demand his parachute... :-)

Very interesting and some great art too. Noreen Riols is one of the last women still alive who once worked for SOE. She told me how she had volunteered for various services before ending up there, and was very disappointed that they offered no uniform (being secret), and - worse - no jaunty hat!

Thanks, Celia, very interesting, and you have reminded me that I must go and visit this exhibition before it closes!

Girls fashion and their age are always inversely proportional. You have fantastic stuff on this blog that keep the girls young and beautiful with you fashion tips. Being a fashion artist I really appreciate your efforts and work.
Love from Royal Lady


waw such a interesting information you have shared Girls Wear

I am commenting to let you know what a terrific experience my daughter enjoyed reading through your web page. She noticed a wide variety of pieces, with the inclusion of what it is like to have an awesome helping style to have the rest without hassle grasp some grueling matters.
Women fashion