'Sitting on a sofa, playing games of chance' by Christina Koning 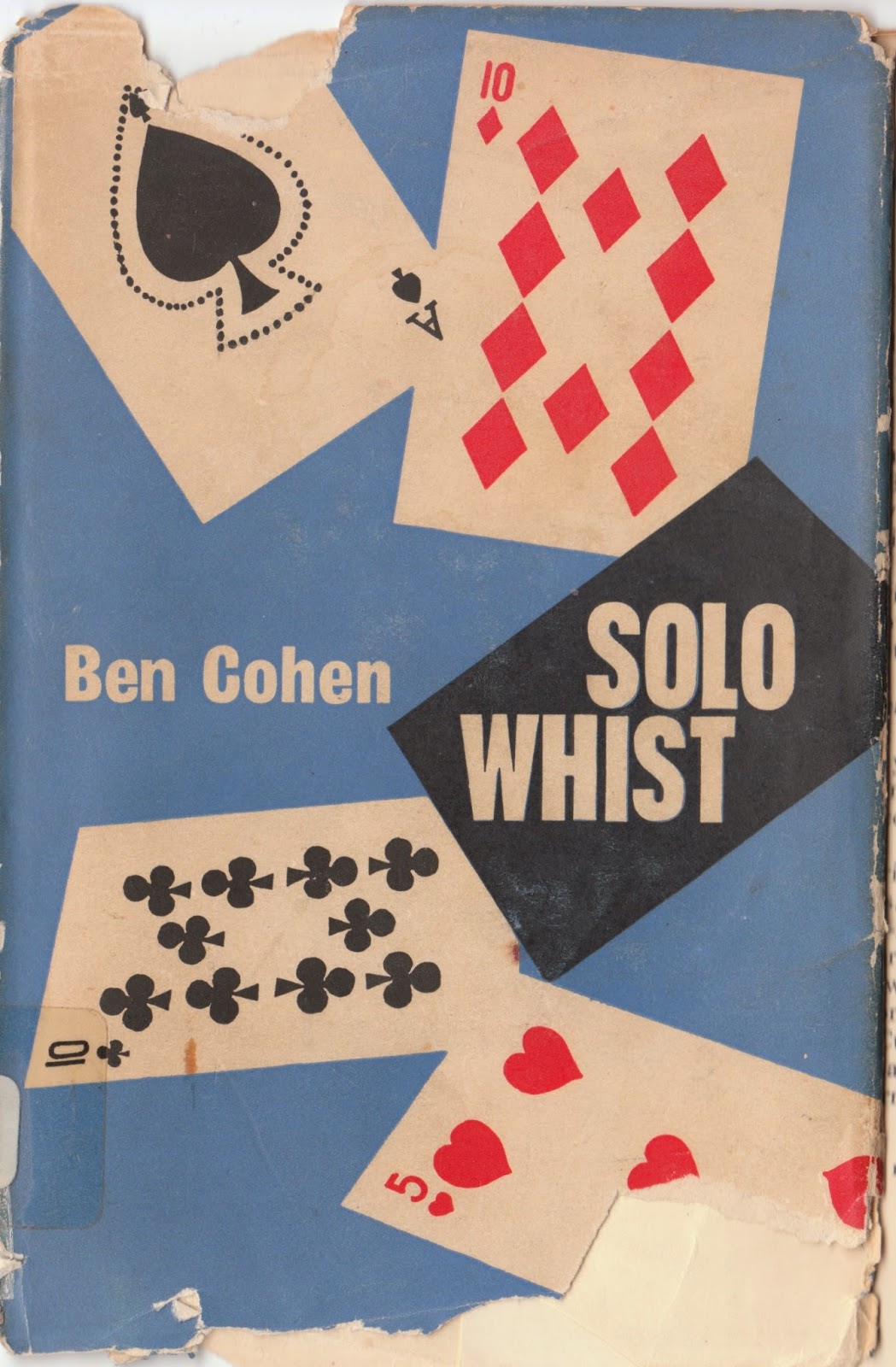 My latest novel, Game of Chance - the second in a series of detective stories set in the late 1920s - centres, as the title suggests, around a game of cards, specifically, Solo Whist. I chose this particular game, rather than Bridge (which was actually more popular in the period I’ve been writing about) for two reasons. One was the relative simplicity of the game, which lent itself to the plot structure I had in mind; the other was the peculiar resonance of the terminology. For a story featuring both an amateur detective and a policeman, the fact that one of the ‘calls’ in the game is ‘Prop & Cop’ was irresistible; so, too, were the no less resonant calls ‘Misere’, ‘Misere Ouverte’ and ‘Abundance’. Other details - the fact that the ‘play’ goes clockwise, and that the individual players are identified by the points of the compass - provided further indications of how the novel should unfold.
Nor was it a wholly arbitrary decision to make card-playing a dominant motif in the second of my stories about the ‘Blind Detective’. My protagonist, Frederick Rowlands, whom we meet a decade after he lost his sight at the Third Battle of Ypres, is a keen card player - as was my grandfather, Charles Thompson, on whom the character is loosely based. I still have two packs of Charles’s braille cards, marked in the upper left-hand and lower right-hand corners with the raised dots that denote their suit and value. With these, my grandfather was able to play to competition standard - against sighted, as well as blind, opponents. And so it made absolute sense to have him matched, in my fictional version, against a murderer, both playing for higher stakes than the shilling or two which might have changed hands in the drawing room. 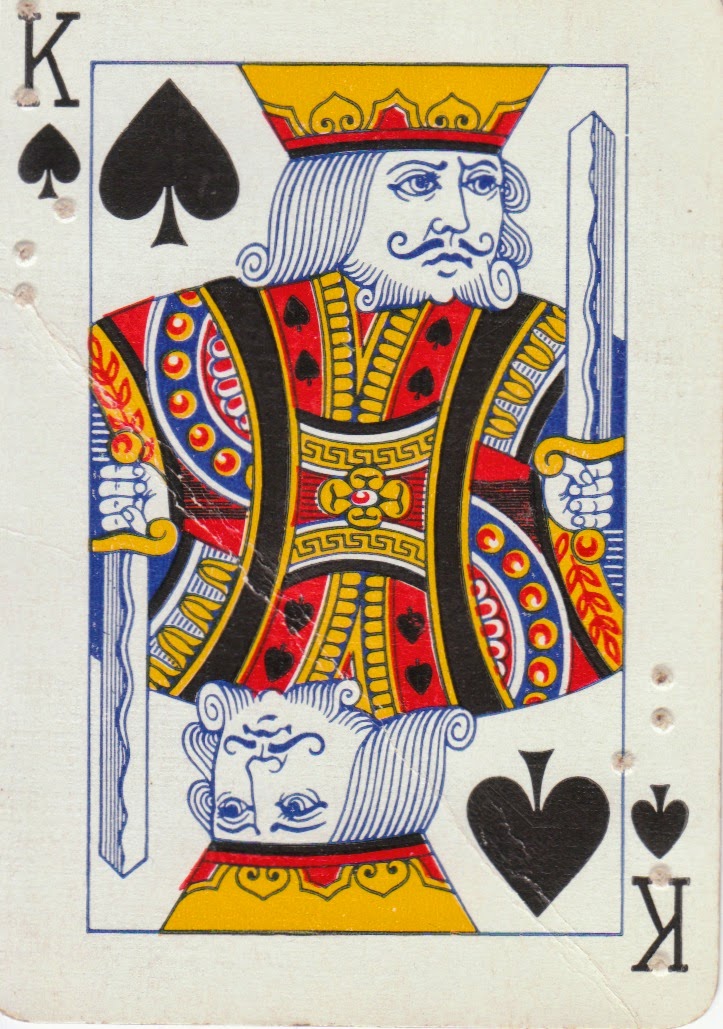 In researching the book, I started to think about the literary predecessors of my particular ‘game of chance’. Because of course card games - like chess, or billiards, or even croquet - are often to be found in novels, and films. They lend themselves so well to the dynamics of relationships. Card games are mock battles, in which much is at stake - not least the winner’s pride. Over the centuries, the language of card playing has become essential to the way we describe our experience. We talk about ‘keeping your cards close to your chest’, ‘putting your cards on the table’ and ‘playing your trump card’; about having been ‘dealt a bad hand’, having ‘a card up your sleeve’, being ‘unlucky at cards, lucky in love’, and so on. A number of these card playing analogies found their way into Game of Chance. In thinking about the novel, I also rather liked the idea that ‘Chance’, that mythical figure on whose favour all such games depend, is usually regarded as blind. 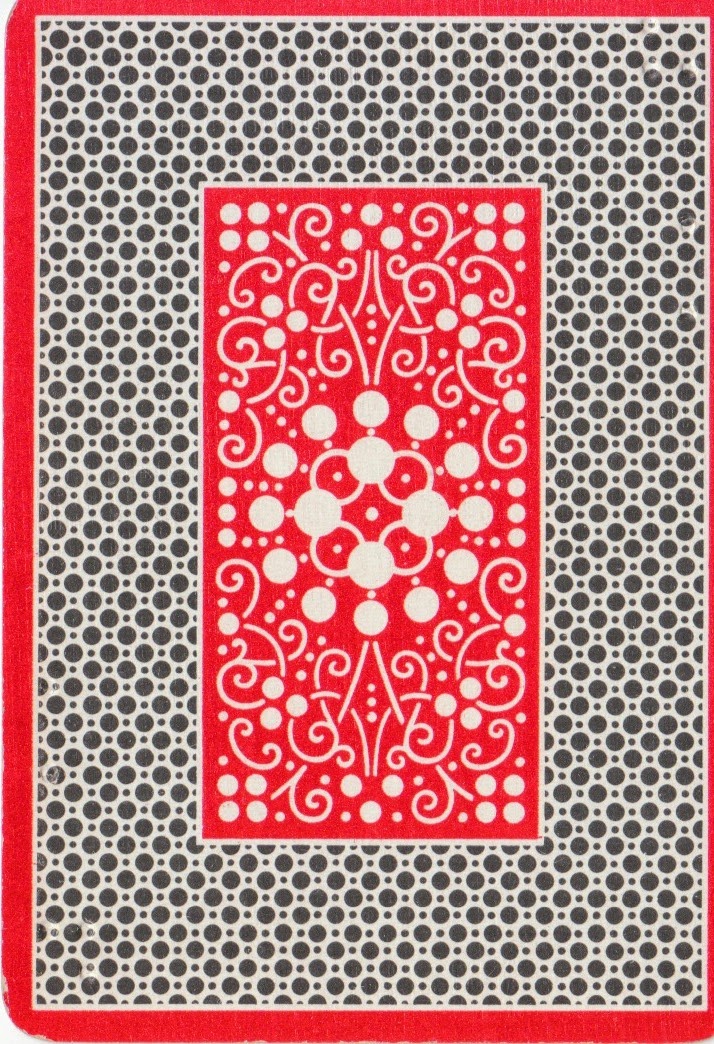 And so to the literary antecedents - of which of course there are many. Card games are thought to have originated in China during the T’ang Dynasty, and the first reference to card games dates from the 9th century. The game - perhaps closer to what we now know as dominoes, since it was played with tiles rather than paper cards, was exported to Persia, from where the idea of dividing the cards into suits seems to have come. Further modifications of the design were to occur before the emergence, in Europe at least, of the familiar ‘deck’ of cards, with its four suits: Hearts, Spades, Diamonds and Clubs, with their numbered sequences and ‘court’ cards. This standardisation is by no means universal, by the way: some countries (Spain, for instance) still use the older suits of Coins, Swords, Cups and Clubs. (I have in front of me a pack I bought some years ago in Venezuela, which looks like this.) Swiss German packs use Roses, Bells, Acorns and Shields instead of the more traditional images. 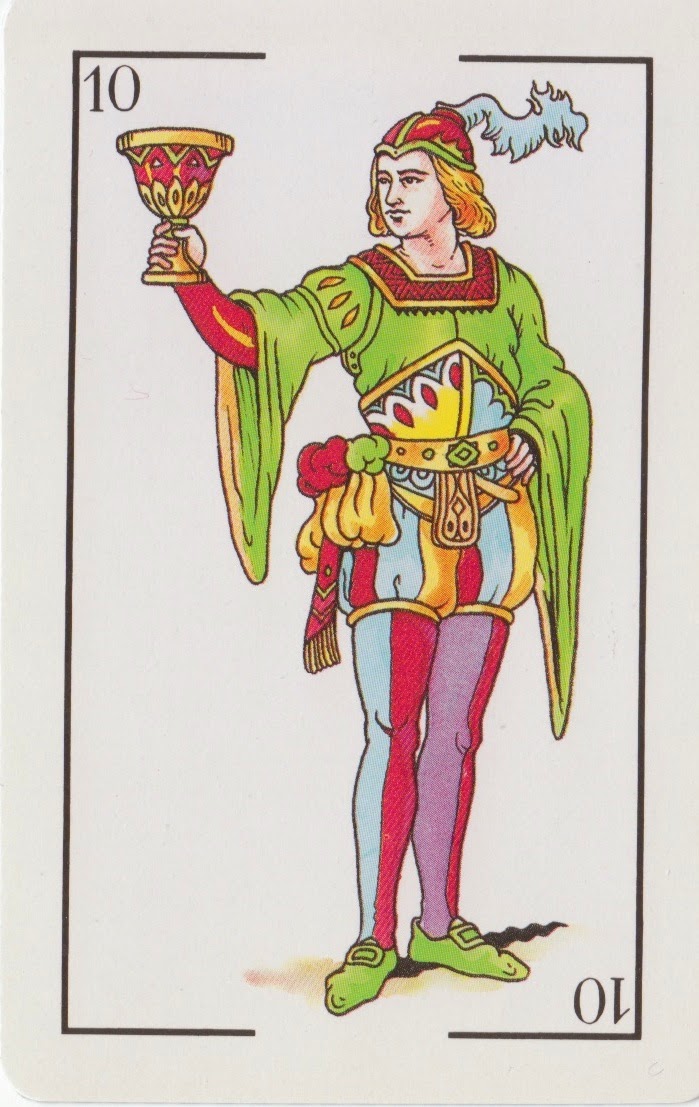 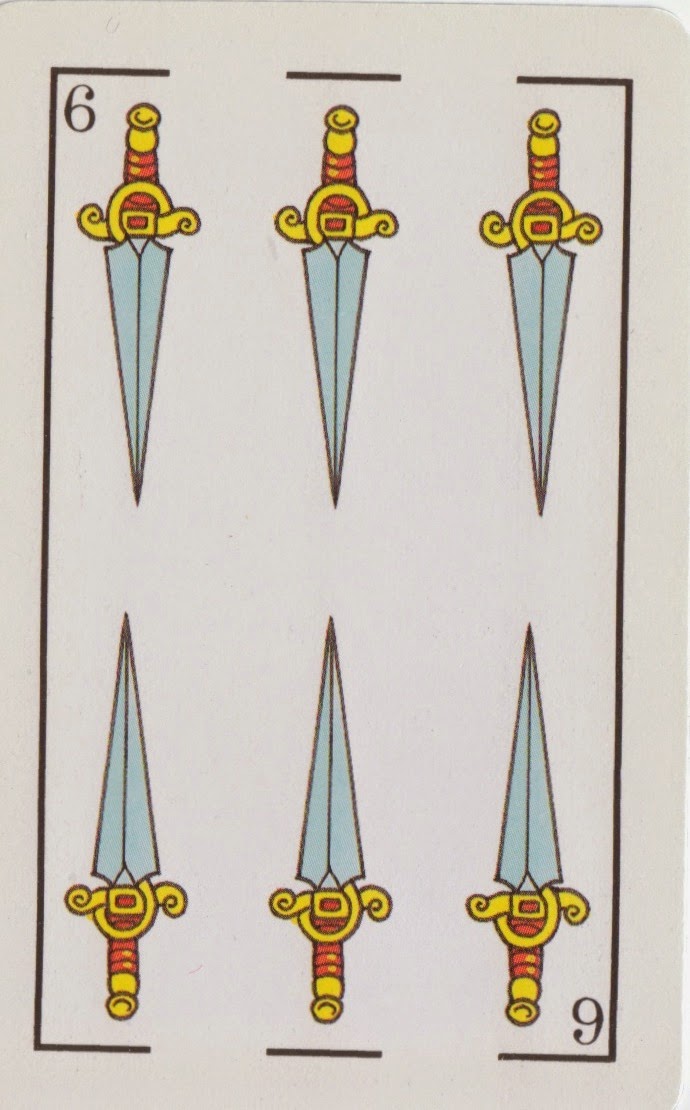 But for Alexander Pope, writing in 1717, the pack looked like this:

‘Behold, four Kings in Majesty rever’d,
With hoary Whiskers and a forky Beard;
And four fair Queens whose hands sustain a Flow’r,
Th’expressive Emblem of their softer Pow’r;
Four Knaves in Garbs succinct, a trusty Band,
Caps on their heads, and Halberds in their hand;
And Particolour’d Troops, a shining Train,
Draw forth to Combat on the Velvet Plain.
The skilful Nymph reviews her Force with Care;
Let Spades be Trumps! she said, and Trumps they were.’ 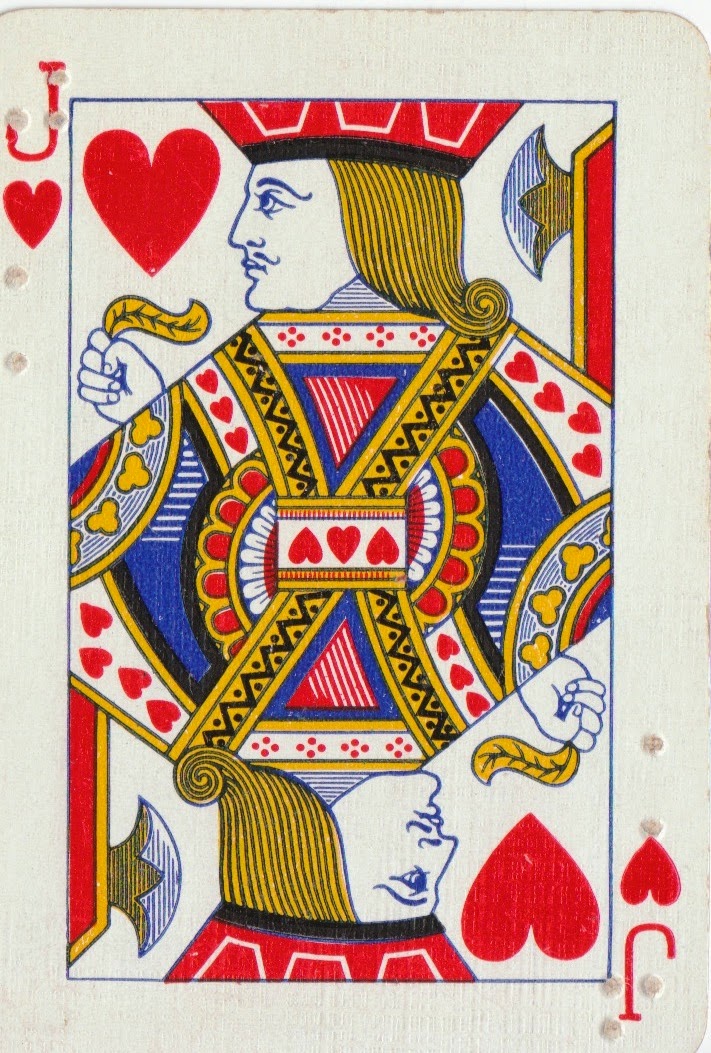 Card games were enormously popular during the eighteenth and early nineteenth century, as any reader of the novels of Jane Austen will attest. References to card playing are to be found in most of her novels - one thinks of Lydia Bennet’s fondness for ‘making bets’ in the game of whist being played while Lizzie and Mr Wickham are having their heart-to-heart in Pride and Prejudice. Here, as elsewhere, the game offers an analogue of the shifts and ambiguities inherent in the characters’ relationships. This is perhaps most clearly seen in the famous card playing scene in Mansfield Park, when Mary Crawford, conscious that she is in danger of losing the affection of Edmund Bertram, the man she hopes to marry, makes a last ‘bid’ for his attention:

‘Miss Crawford, a little suspicious and resentful of a certain tone of voice and a certain half-look attending the last expression of his hope, made a hasty finish of her dealing with William Price, and securing his knave at an exorbitant rate, exclaimed, “There, I will stake my last like a woman of spirit. No cold prudence for me. I am not born to sit still and do nothing. If I lose the game, it shall not be from not striving for it”…’

As always in Austen, it is the psychological aspect of the ‘game’ the characters are playing which most interests her. This is no less the case in another famous literary card game - the one played by Pip and Estella in Charles Dickens’s Great Expectations, in which the themes of betrayal and sexual cruelty are explicitly set out:

‘“What do you play, boy?” asked Estella of myself, with the greatest disdain.
“Nothing but beggar my neighbour, miss.”
“Beggar him,” said Miss Havisham to Estella. So we sat down to cards…’

This, incidentally, is the game in which the youthful femme fatale shows her ‘disdain’ for her unfortunate playmate in a single telling phrase: ‘“He calls the knaves, Jacks, this boy!” said Estella…’ Enough to send a shiver up one’s spine.
In Edith Wharton’s House of Mirth, and its wonderful film version, directed by Terence Davies, card playing has moved from being simply a metaphor for the human interactions to being an integral element of the plot. Here, the impoverished Lily Bart, who has hitherto refused to become embroiled in the ruinously expensive games of bridge which are a feature of the country house weekends to which she is invited, is forced to conform - or else risk being ostracised from the ‘best’ social circles:

‘For in the last year she had found that her hostesses expected her to take a place at the card-table. It was one of the taxes she had to pay for their prolonged hospitality, and for the dresses and trinkets which occasionally replenished her insufficient wardrobe. And since she had played regularly, the passion had grown on her…’ 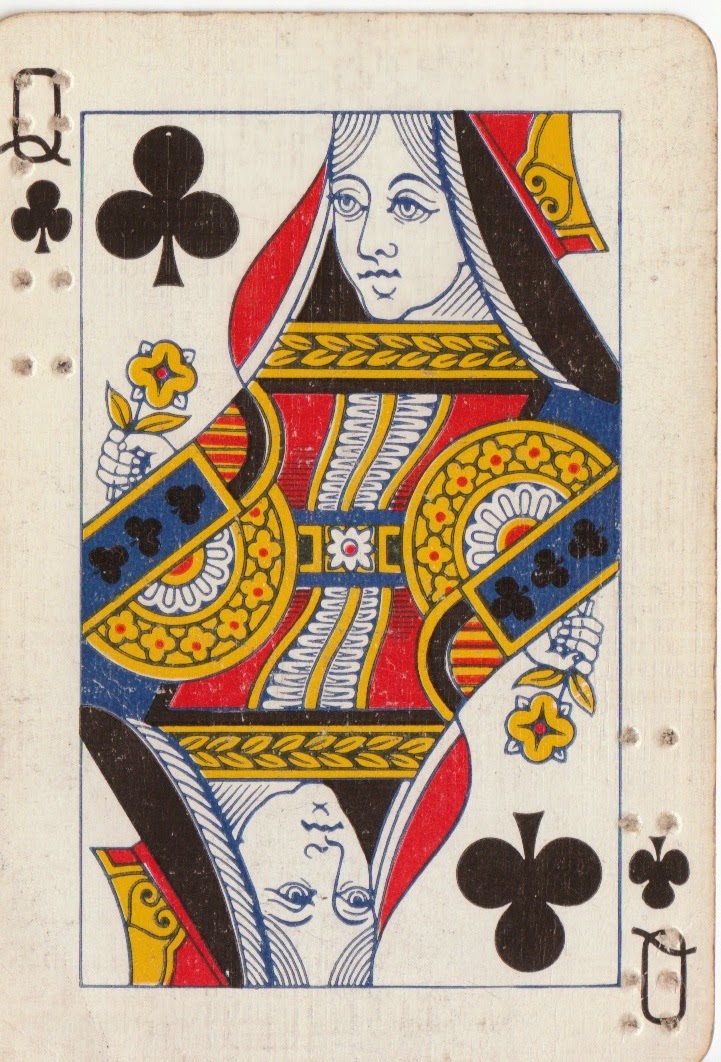 Aficionados of E.F. Benson’s Mapp and Lucia stories (and I am one) will be familiar with the ‘passion’ that bridge inspires in its devotees - none more addicted to this particular game of chance that the two principals, Elizabeth Mapp and Emmeline ‘Lucia’ Lucas. Bridge is a thread which runs throughout this deliciously funny series of novels (the first of which was published in 1931) and gives rise to some of the most hilarious scenes. Here, Miss Mapp is indulging in a little bit of gamesmanship - to the annoyance of her fellow players:

‘Upstairs the geniality of the tea-table had crumbled over cards. Elizabeth had been losing and she was feeling hot. She said to Diva “This little room - so cosy - is quite stifling, dear. May we have the window open?” Diva opened it as a deal was in progress, and the cards blew about the table: Elizabeth’s remnants consisted of Kings and aces, but a fresh deal was necessary. Diva dropped a card on the floor and put her foot on it so nimbly that nobody could see what it was… Elizabeth demanded another fresh deal. That was conceded, but it left a friction.’

Sometimes the ‘friction’ engendered by games of chance - especially, it would seem, by bridge - can end in murder. Agatha Christie’s Cards on the Table, a story I found extremely helpful when plotting my own murder mystery, concerns such a game. Set up by the sinister Mr Shaitana, it centres around a dinner party, to which four detectives - one of them our old friend Hercule Poirot - and four suspected murderers have been invited. When dinner is over, the guests sit down to cards.

‘“Thank goodness there’s to be bridge,” said Mrs Lorrimer in an aside to Poirot. “I’m one of the worst bridge fiends that ever lived. It’s growing on me. I simply will not go out to dinner now if there’s no bridge afterwards…”’
Of course it all goes horribly wrong. But at least Mrs Lorrimer gets her game of cards. 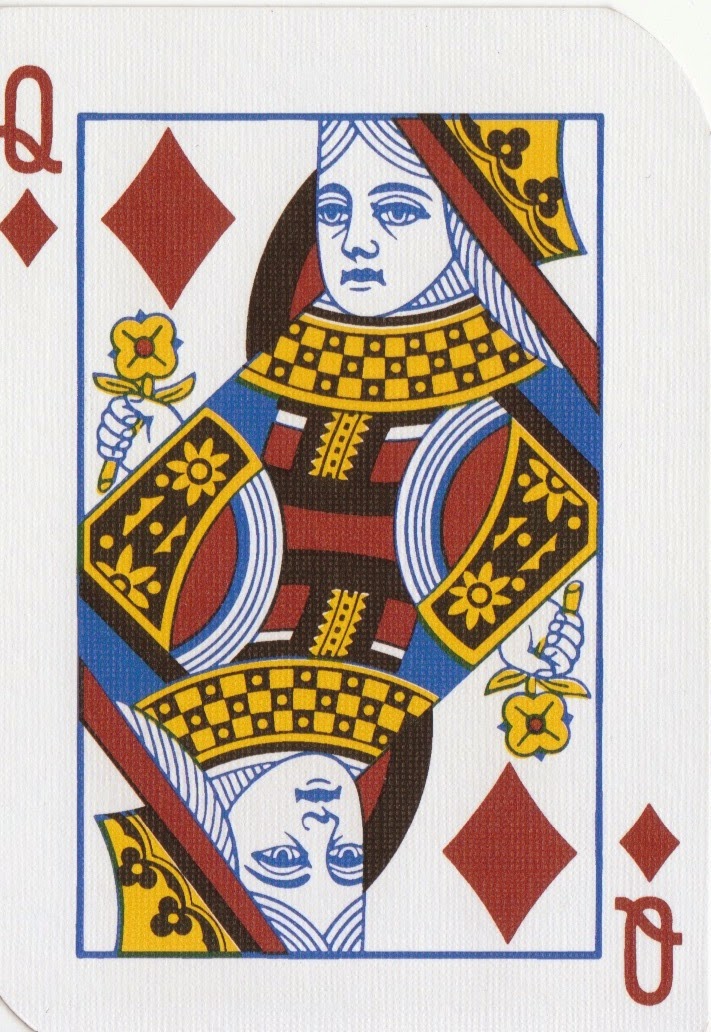 I am a card dumbo! Scrabble, now.. but of course cards are really important to novels of the past, and should be in novels set in the past, since in an age before television, they were an important way of passing the evening, and sharpening the players' wits - perhaps even warding off Alzheimers? So though I am 'card-blind', I really enjoyed this blog. The use of bridge in Mapp and Lucia and the other Lucia/Mapp books, is absolutely delicious, as you say.