When I was eight I went with my family to Positano, on the coast just south of Naples. This was the beginning of my lifelong passion for Italy and certain intense memories have stayed with me: the sight of people living in caves in the mountainside; a vivid green lizard disappearing into a sunlit wall; luscious fragrant peaches that were so juicy you had to wash after you guzzled them. As an adult I came to know Italy well but didn’t return to that coast until last month when my husband and I spent a week in Amalfi. I always thought of that stunning coast as existing purely for tourism of the most indulgent kind but discovered, to my surprise, that Amalfi has a long and complex history.

Its origins are very vague; Amalfi was a beautiful nymph (who still apears on the town banner) and Hercules fell in love with her. Alternatively, in the fourth century, Roman nobles in five ships set out from the new city of Constantinople and, after many adventures, ended up at Scala, in the mountains above Amalfi. Huns, Vandals and Goths invaded but Scala and Amalfi were protected by their mountains. Before the rise of Venice Amalfi was a great maritime power, part of the Byzantine empire until the Normans invaded.

There were bishops and doges and each doge announced his accession to the Emperor in Constantinople. Although it was supposed to be a republic the doges were really absolute monarchs from the same family. It was a city of merchant adventurers with trading colonies as far away as Beirut and Cairo.

In 1073 Robert Guiscard seized and sacked Amalfi and added 'Duke of Amalfi' to his titles but Amalfi revolted and elected one last last doge. After that the Normans ruled Amalfi and it grew into a city of seventy thousand people with a flourishing cultural life and a big fleet. Trading connections brought the Amalfitani in contact very early with the process of paper making, which Arab merchants had first discovered in China in the early Middle Ages, and there is still a paper factory.

In 1343 a terrible earthquake struck the Bay of Naples. The tsunami that followed destroyed the lower town of Amalfi which fell into the sea. This tsunami was observed by the poet Petrarch, whose ship was forced to return to port, and he wrote about it in the fifth book of his Epistolae Familiares. So a great city was transformed into a village with a harbour and just a few thousand residents. Of course this kind of lost Atlantis story always has great imaginative appeal and you wonder what ruined palaces and churches you are swimming over.

The second of the fifteenth century Piccolomini Dukes of Amalfi, Alfonso, was married to Joanna of Aragon, who was Webster’s Duchess of Malfi. 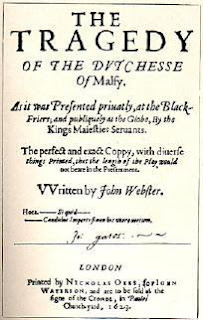 When her husband died the Duchess fell in love with her steward, Antonio Bologna, and secretly married him. She gave birth to his child, Frederick, who was sent away to be brought up elsewhere and then they had a girl. One of her brothers, a Cardinal, became suspicious so Bologna escaped to Ancona with their children and the Duchess, pregnant with their third child, followed. She said to her household there, ‘I would rather live privately with my husband than remain duchess.’

When her brother the Cardinal heard this he had them banished from Ancona. Bologna fled to Siena and then to Padua where he was eventually killed. The Duchess with her children and maid was captured and imprisoned in Torre dello Ziro, a tower between Amalfi and Atrani (which is still there) where she is said to have been murdered by her brothers. Webster would have got this gory tale from Bandello’s Novelle (1554). Bandello had known the real Bologna in Milan before his assassination.

Amalfi never regained its earlier importance. Later, that area was ruled by Spain, then by Joseph Bonaparte, and in 1861 Francis 11, the last King of Naples, had his kingdom absorbed into the kingdom of Italy. Amalfi remained a quiet harbour town until the arrival of roads and tourism. Every four years there is still a regatta of the four ancient rival maritime republics: Genoa, Pisa, Venice and Amalfi. The boat rowed by the Amalfi team, beautifully painted and carved, can be seen in a courtyard near the sea.

Ravello, in the mountains just above Amalfi, is also supposed to have been founded by Roman fugitives. The Bishop of Ravello was appointed directly from Rome and in the exquisite little Cathedral Hadrian IV, Nicholas Breakspear, the only Englishman ever to be made Pope, confirmed Norman William as King of Sicily.

In the 12th century Ravello had about twenty-five thousand inhabitants but now it is tiny. Its wonderful medieval palaces and gardens have attracted many artists, musicians, and writers including Boccaccio, Grieg, Escher, Virginia Woolf and D H Lawrence. Wagner is thought to have found inspiration for Parsifal in the gardens of the Villa Ruffalo and until his death Gore Vidal lived in one of the medieval palaces. Every summer Ravello has a classical music festival.

How interesting! And on a day like today, I do feel a distinct pull towards the blue south. I must visit it. Such a sad story about the Duchess; it shows the limitations of privilege.