'Playing The Fool' by Karen Maitland 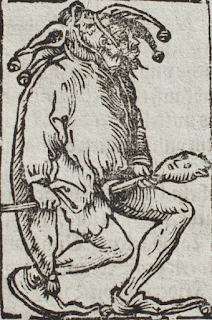 Ask most people to imagine a medieval feast and they will usually picture a jester or ‘fool’ prancing around the tables clad in bells and pointed hats, but how accurate is that image? In the 11th and 12th centuries the title minstrel, meaning little servant, was the name given to a wide range of entertainers, including musicians, tumblers and magicians as well as joculators or jesters. Both men and women were employed as minstrels and there is a record of joculatrix called Adeline, owning land in Hampshire in 1086.

In the 12th century the title of follus or fool began to be mentioned in documents, often when these jesters had been rewarded with land as payment for loyal service. A fool named Roland le Pettour was given 30 acres of land by King Henry II, probably when he retired, on condition that Roland returned to the royal court every year on Christmas Day to ‘leap, whistle and fart.’

But noblemen and even kings did not throw daily banquets and, besides, listening to same fool or joculator every night of the year would have become tedious, so medieval jesters only performed occasionally. The rest of the year they were expected to carry out other duties in the household, such as being keeper of the hounds, or travelling to markets to buy provisions for the household.

In the Middle Ages there were three types of fool. The professional fool employed by a nobleman was usually very astute, educated and generally wore normal clothes, like their masters, rather than the classic fool’s costume. But wealthy families also adopted boys and men who had mental illnesses or physical deformities, keeping them almost as pets for their amusement or as an act ‘Christian charity’. These too were given the title of ‘the Queen’s fool’ or ‘Lord X’s fool’, but they were not paid, just fed and clothed. If their masters decided these poor fools no longer amused them they were sometimes provided with a pension in the form of regular alms, but sadly many ended their days as beggars.


The third class of fool was the Fool Societies, particularly popular in France. These were groups of amateurs who performed at Christmas, or at fairs or festivals. They were generally the ones to don the classic jester’s costume of a hood with ears, multi-coloured tunics and tie bells to their shoes or clothes. They would dance and prance through the streets, some even carrying their infants on their backs.


Both King Edward II and Edward III had a succession of professional fools and called them all ‘Robert’ regardless of their real names. But by the 13th century some talented jesters were beginning to achieve superstar status. Those who were lucky enough to be employed by royalty were provided with their own horse and servants. Tom le Fol – Tom the Fool – performed at the marriage feast of Edward I’s daughter Elizabeth and was given a fee of 50 shillings which was a fortune, since a skilled thatcher could expect to earn only 2½ pence a day and you could buy a goose for 1½ pennies.


Of course, most fools weren’t lucky enough to come to the attention of the king. One traveller complained that no one gave him rabbit-trimmed robes or costly gifts, because he couldn’t play instruments, tell jokes and stories, juggle, dance, and fart a tune.


When I was researching the life of a medieval jester, who is one of the characters in my novel, 'The Plague Charmer', I discovered that dwarf jesters were also expected to carry clandestine kisses and illicit fondlings between men and women in the noble houses who were flirting or having affairs.

That task could be hazardous, but jesters or professional fools could be required to carry out duties that were even more dangerous. On the battlefield one of their roles was to carry messages between the leaders of warring armies and sometimes the enemy did 'kill the messenger' and often in particularly nasty ways.

Fools certainly earned their wages. It was serious game they had to play.